From Infogalactic: the planetary knowledge core
Jump to: navigation, search
For other uses, see Moers (surname).

listen); older form: Mörs; archaic Dutch: Murse, Murs or Meurs) is a German city on the western bank of the Rhine, close to Duisburg. Moers belongs to the district of Wesel.

Known earliest from 1186, the county of Moers was an independent principality within the Holy Roman Empire.

During the Eighty Years' War it was alternately captured by Spanish and Dutch troops, as it bordered the Upper Quarter of Guelders. During the war it finally fell to Maurice of Orange. As it was separated from the Dutch Republic by Spanish Upper Guelders it did not become an integral part of the Republic, though Dutch troops were stationed there.

After the death of William III of Orange in 1702, Moers was inherited by the king of Prussia. All Dutch troops and civil servants were expelled.

In 1795 it was annexed by France. At the Congress of Vienna, in 1815 it was returned to Prussia and in 1871 it became part of the German Empire.

A target of the Oil Campaign of World War II, the Steinkohlenbergwerke (English: coal mine) Rheinpreussen synthetic oil plant in Moers,[3] was partially dismantled post-war. 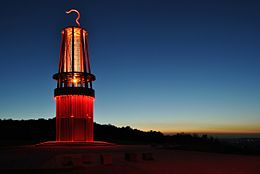 The illuminated, 30 meters high mining lamp memorial by Otto Piene on the spoil tip Halde Rheinpreußen in the north of Moers during the blue hour

In 1985, the Moers Sports Club (volleyball) was formed, winning the 1989 Bundesliga championship.

Moers is twinned with:[4]