The Moksha language (Moksha: мокшень кяль mokšəń käĺ) is a member of the Mordvinic branch of the Uralic languages with around 130,000 native speakers.[1] Moksha is the majority language in the western part of Mordovia.[3] Its closest relative is the Erzya language, with which it is not mutually intelligible. Moksha is also considered to be closely related to the extinct Meshcherian and Muromian languages.[4]

Moksha is one of the three official languages in Mordovia (the others being Erzya and Russian). The right to one's own language is guaranteed by the Constitution of the Mordovia Republic.[5] The republican law of Mordovia N 19-3 issued in 1998[6] declares Moksha one of its state languages and regulates its usage in various spheres: in state bodies such as Mordovian Parliament, official documents and seals, education, mass-media, information about goods, geographical names, road signs. However, the actual usage of Moksha and Erzya is rather limited.

The first few Moksha schools were devised in the 19th century by Russian Christian missionaries. Since 1973 Moksha language was allowed to be used as language of instruction in first 3 grades of elementary school in rural areas and as a subject on a voluntary basis.[7] The medium in universities of Mordovia is Russian, but the philological faculties of Mordovian State University and Mordovian State Pedagogical Institute offer a teacher course of Moksha.[8][9] Mordovian State University also provides a course of Moksha for other humanitarian and some technical specialities.[9] According to the annual statistics of the Russian Ministry of Education in 2014-2015 year there were 48 Moksha-medium schools (all in rural areas) where 644 students were taught, and 202 schools (152 in rural areas) where Moksha was studied as a subject by 15,783 students (5,412 in rural areas).[10] Since 2010, study of Moksha in schools of Mordovia is not compulsory, but can be chosen only by parents.[11] 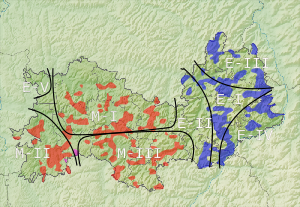 The Moksha languages is divided into three dialects:

The dialects may be divided with another principle depending on their vowel system:

The standard literary Moksha language is based on the central group with ä (particularly the dialect of Krasnoslobodsk).

There are eight vowels with a slight allophony and reduction of unstressed vowels. Moksha has lost its original system of vowel harmony but maintains consonant-vowel harmony (palatalized consonants go with front vowels, non-palatalized with non-front).

There are some restrictions for the occurrence of vowels within a word:[12]

Unstressed /a/ and /æ/ are slightly reduced and shortened [ă] and [æ̆].

There are 33 consonants in Moksha.

/ç/ is realized as a sibilant [ɕ] before the plural suffix /-t⁽ʲ⁾/ in south-east dialects.[15]

Palatalization, characteristic of Uralic languages, is contrastive only for dental consonants, which can be either "soft" or " hard". In Moksha Cyrillic alphabet the palatalization is designated like in Russian: either by a "soft sign" ⟨ь⟩ after a "soft" consonant or by writing "soft" vowels ⟨е, ё, и, ю, я⟩ after a "soft" consonant. In scientific transliteration the acute accent or apostrophe are used.

Before certain inflectional and derivational endings, devoicing continues to exist as a phonological process in Moksha. This affects all other voiced consonants as well, including the nasal consonants and semivowel. No voiceless nasals are however found in Moksha: the devoicing of nasals produces voiceless oral stops. Altogether the following devoicing processes apply:

E.g. before the nominative plural /-t⁽ʲ⁾/:

Moksha has been written using Cyrillic with spelling rules identical to those of Russian since the 18th century and as a consequence of that vowels /e, ɛ, ə/ are not differentiated in a straightforward way,[17] however they can be predicted more or less from Moksha phonotactics. The 1993 spelling reform defines that /ə/ in the first (either stressed or unstressed) syllable must be written with the "hard" sign ⟨ъ⟩ (e. g. мъ́рдсемс mə́rdśəms "to return", formerly мрдсемс). The version of the Moksha Cyrillic alphabet used in 1924-1927 had several extra letters, either digraphs or single letters with diacritics.[18] Although the use of the Latin script for Moksha was officially approved by the CIK VCKNA (General Executive Committee of the All Union New Alphabet Central Committee) on June 25, 1932, it was never implemented.

Before 1917 about 100 books and pamphlets mostly of religious character were published. More than 200 manuscripts including at least 50 wordlists were not printed. In the 19th century the Russian Orthodox Missionary Society in Kazan published Moksha primers and elementary textbooks of the Russian language for the Mokshas. Among them were two fascicles with samples of Moksha folk poetry. The great native scholar Makar Evsevyev collected Moksha folk songs published in one volume in 1897. Early in the Soviet period, social and political literature predominated among published works. Printing of Moksha language books was all done in Moscow until the establishment of the Mordvinian national district in 1928. Official conferences in 1928 and 1935 decreed the northwest dialect to be the basis for the literary language.