The Moldovan Air Force is the national air force of Moldova. It was formed following Moldova's independence from the Soviet Union in August 1991 and is part of the Military of Moldova.

In 2007 the Air Force had been reduced to a strength of 1,040 men organized into one helicopter squadron, and one missile battalion. They had 6 MiG-29S aircraft, upgraded in Ukraine and stationed in Mărculeşti Air Base, 8 Mi-8 helicopters, 5 transport aircraft (including an Antonov An-72), and 12 SA-3 surface-to-air missile.

Under an agreement finalized on 10 October 1997, the United States acquired 14 MiG 29Cs, described by U.S. officials as wired to permit delivery of nuclear weapons. Also, the United States purchased six MiG 29As, one MiG 29B, 500 air-to-air missiles and all the spare parts and diagnostic equipment present at the Moldovan Air Base where the aircraft were stationed. In return, Moldova received around $40,000,000, humanitarian assistance and non-lethal excess defense articles, such as trucks.[4] The purchase was not without its opponents in Moldova, and the then acting defense minister, Valeriu Pasat would later be charged for illegally selling the aircraft to the USA.[5]

In late 1998 Moldova also sold 10 MIG 29s to Eritrea, but it was speculated that these aircraft were no longer airworthy.

All of those MiG-29s were transported from Moldova to the National Air Intelligence Center (NAIC) at Wright-Patterson Air Force Base near Dayton, Ohio in C-17 transport planes over a period of two weeks.[6]

In February 2012, Defense Ministry announced eight planes and eight military transport helicopters will be purchased at the cost of US$240 million.[7] 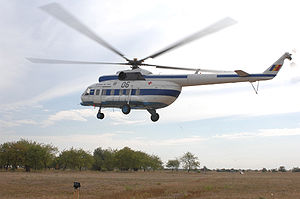 Moldova received approximately 34 MiG-29’s from the collapse of the Soviet Union in 1991, proving too expensive to maintain, they were sold off to Eritrea, Yemen. and the United States. Other unserviceable aircraft to be placed in storage consisted of the An-2, Tu-134, and some An-24’s[9] 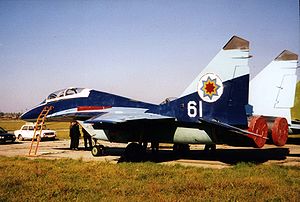 Media related to Air force of Moldova at Wikimedia Commons