From Infogalactic: the planetary knowledge core
Jump to: navigation, search
For quantum mechanical study of the electron distribution in a molecule, see stereoelectronics.

Conventional electronic devices are traditionally made from bulk materials. The bulk approach has inherent limitations in addition to becoming increasingly demanding and expensive. Thus, the idea was born that the components could instead be built up atom for atom in a chemistry lab (bottom up) as opposed to carving them out of bulk material (top down). In single molecule electronics, the bulk material is replaced by single molecules. That is, instead of creating structures by removing or applying material after a pattern scaffold, the atoms are put together in a chemistry lab. The molecules utilized have properties that resemble traditional electronic components such as a wire, transistor or rectifier.

Single molecule electronics is an emerging field, and entire electronic circuits consisting exclusively of molecular sized compounds are still very far from being realized. However, the continuous demand for more computing power together with the inherent limitations of the present day lithographic methods make the transition seem unavoidable. Currently, the focus is on discovering molecules with interesting properties and on finding ways to obtaining reliable and reproducible contacts between the molecular components and the bulk material of the electrodes.

Molecular electronics operates in the quantum realm of distances less than 100 nanometers. Miniaturization down to single molecules brings the scale down to a regime where quantum effects are important. As opposed to the case in conventional electronic components, where electrons can be filled in or drawn out more or less like a continuous flow of charge, the transfer of a single electron alters the system significantly. The significant amount of energy due to charging has to be taken into account when making calculations about the electronic properties of the setup and is highly sensitive to distances to conducting surfaces nearby. 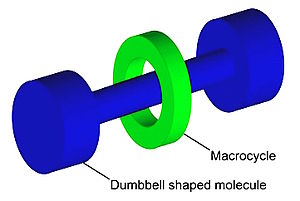 Graphical representation of a rotaxane, useful as a molecular switch.

One of the biggest problems with measuring on single molecules is to establish reproducible electrical contact with only one molecule and doing so without shortcutting the electrodes. Because the current photolithographic technology is unable to produce electrode gaps small enough to contact both ends of the molecules tested (in the order of nanometers) alternative strategies are put into use. These include molecular-sized gaps called break junctions, in which a thin electrode is stretched until it breaks. Another method is to use the tip of a scanning tunneling microscope (STM) to contact molecules adhered at the other end to a metal substrate.[2] Another popular way to anchor molecules to the electrodes is to make use of sulfur's high affinity to gold; though useful, the anchoring is non-specific and thus anchors the molecules randomly to all gold surfaces, and the contact resistance is highly dependent on the precise atomic geometry around the site of anchoring and thereby inherently compromises the reproducibility of the connection. To circumvent the latter issue, experiments have shown that fullerenes could be a good candidate for use instead of sulfur because of the large conjugated π-system that can electrically contact many more atoms at once than a single atom of sulfur.[3] The shift from metal electrodes to semiconductor electrodes allows for more tailored properties and thus for more interesting applications. There are some concepts for contacting organic molecules using semiconductor-only electrodes, for example by using indium arsenide nanowires with an embedded segment of the wider bandgap material indium phosphide used as an electronic barrier to be bridged by molecules.[4]

One of the biggest hindrances for single molecule electronics to be commercially exploited is the lack of techniques to connect a molecular sized circuit to bulk electrodes in a way that gives reproducible results. Also problematic is the fact that some measurements on single molecules are carried out in cryogenic temperatures (close to absolute zero) which is very energy consuming.

The biggest advantage of conductive polymers is their processability, mainly by dispersion. Conductive polymers are not plastics, i.e., they are not thermoformable, but they are organic polymers, like (insulating) polymers. They can offer high electrical conductivity but do not show mechanical properties as other commercially used polymers do. The electrical properties can be fine-tuned using the methods of organic synthesis [5] and by advanced dispersion techniques.[6]

The linear-backbone polymers such as polyacetylene, polypyrrole, and polyaniline are the main classes of conductive polymers. Poly(3-alkylthiophenes) are the archetypical materials for solar cells and transistors.[5]

Conducting polymers have backbones of contiguous sp2 hybridized carbon centers. One valence electron on each center resides in a pz orbital, which is orthogonal to the other three sigma-bonds. The electrons in these delocalized orbitals have high mobility when the material is "doped" by oxidation, which removes some of these delocalized electrons. Thus the conjugated p-orbitals form a one-dimensional electronic band, and the electrons within this band become mobile when it is partially emptied. Despite intensive research, the relationship between morphology, chain structure and conductivity is poorly understood yet.[7]

Due to their poor processability, conductive polymers enjoy few large-scale applications . They have some promise in antistatic materials[5] and they have been incorporated into commercial displays and batteries, but there have had limitations due to the manufacturing costs, material inconsistencies, toxicity, poor solubility in solvents, and inability to directly melt process. Nevertheless, conducting polymers are rapidly gaining attraction in new applications with increasingly processable materials with better electrical and physical properties and lower costs. With the availability of stable and reproducible dispersions, PEDOT and polyaniline have gained some large scale applications. While PEDOT (poly(3,4-ethylenedioxythiophene)) is mainly used in antistatic applications and as a transparent conductive layer in form of PEDOT:PSS dispersions (PSS=polystyrene sulfonic acid), polyaniline is widely used for printed circuit board manufacturing – in the final finish, for protecting copper from corrosion and preventing its solderability.[6] The new nanostructured forms of conducting polymers particularly, provide fresh air to this field with their higher surface area and better dispersability.