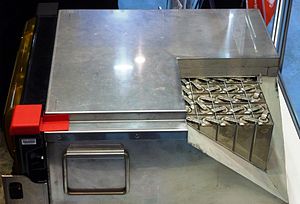 Molten salt batteries (including liquid metal batteries) are a class of battery that uses molten salts as an electrolyte and offers both a high energy density and a high power density. Traditional "use once" thermal batteries can be stored in their solid state at room-temperature for long periods of time before being activated by heating. Rechargeable liquid metal batteries are used for electric vehicles and potentially also for grid energy storage, to balance out intermittent renewable power sources such as solar panels and wind turbines.

Thermal batteries originated during World War II when German scientist Georg Otto Erb developed the first practical cells, using a salt mixture as an electrolyte. Erb developed batteries for military applications, including the V-1 flying bomb and the V-2 rocket, and artillery fuzing systems. None of these batteries entered field use during the war. Afterwards, Erb was interrogated by British intelligence. His work was reported in "The Theory and Practice of Thermal Cells". This information was subsequently passed on to the United States Ordnance Development Division of the National Bureau of Standards.[2] When the technology reached the United States in 1946 it was immediately applied to replacing the troublesome liquid-based systems that had previously been used to power artillery proximity fuzes. They were used for ordnance applications (e.g., proximity fuzes) since WWII and later in nuclear weapons. The same technology was studied by Argonne National Laboratories in the 1980s for use in electric vehicles.[citation needed]

Not to be confused with Molten salt thermal storage.

Thermal batteries use an electrolyte that is solid and inactive at ambient temperatures. They can be stored indefinitely (over 50 years) yet provide full power in an instant when required. Once activated, they provide a burst of high power for a short period (a few tens of seconds) to 60 minutes or more, with output ranging from watts to kilowatts. The high power is due to the high ionic conductivity of the molten salt, which is three orders of magnitude (or more) greater than that of the sulfuric acid in a lead-acid car battery.

One design uses a fuze strip (containing barium chromate and powdered zirconium metal in a ceramic paper) along the edge of the heat pellets to initiate burning. The fuze strip is typically fired by an electrical igniter or squib by application of electric current.

Another design uses a center hole in the middle of the battery stack into which the high-energy electrical igniter fires a mixture of hot gases and incandescent particles. This allows much faster activation times (tens of milliseconds) vs. hundreds of milliseconds for the edge-strip design. Battery activation can be accomplished by a percussion primer, similar to a shotgun shell. The heat source should be gasless. The standard heat source typically consist of mixtures of iron powder and potassium perchlorate in weight ratios of 88/12, 86/14, or 84/16.[citation needed] The higher the potassium perchlorate level, the higher the heat output (nominally 200, 259, and 297 calories/gram, respectively). This property of unactivated storage has the double benefit of avoiding deterioration of the active materials during storage, and eliminating capacity loss due to self-discharge until the battery is activated.

In the 1980s lithium-alloy anodes replaced calcium or magnesium anodes, with cathodes of calcium chromate, vanadium or tungsten oxides. Lithium-silicon alloys are favored over the earlier lithium-aluminium alloys. The corresponding cathode for use with the lithium-alloy anodes is mainly iron disulfide (pyrite) replaced by cobalt disulfide for high-power applications. The electrolyte is normally a eutectic mixture of lithium chloride and potassium chloride.

More recently, other lower-melting, eutectic electrolytes based on lithium bromide, potassium bromide, and lithium chloride or lithium fluoride have also been used to provide longer operational lifetimes; they are also better conductors. The so-called "all-lithium" electrolyte based on lithium chloride, lithium bromide, and lithium fluoride (no potassium salts) is also used for high-power applications, because of its high ionic conductivity. A radioisotope thermal generator, such as in the form of pellets of 90SrTiO4, can be used for long-term delivery of heat for the battery after activation, keeping it in a molten state.[3]

Thermal batteries are used almost exclusively for military applications, notably for guided missiles.[4][5] They are the primary power source for many missiles such as the AIM-9 Sidewinder, MIM-104 Patriot, BGM-71 TOW, BGM-109 Tomahawk and others. In these batteries the electrolyte is immobilized when molten by a special grade of magnesium oxide that holds it in place by capillary action. This powdered mixture is pressed into pellets to form a separator between the anode and cathode of each cell in the battery stack. As long as the electrolyte (salt) is solid, the battery is inert and remains inactive. Each cell also contains a pyrotechnic heat source which is used to heat the cell to the typical operating temperature of 400–550 °C.

Since the mid-1960s much development work has been undertaken on rechargeable batteries using sodium (Na) for the negative electrodes. Sodium is attractive because of its high reduction potential of -2.71 volts, low weight, non-toxic nature, relative abundance, availability and low cost. In order to construct practical batteries, the sodium must be in liquid form. The melting point of sodium is 98 °C (208 °F). This means that sodium-based batteries operate at high temperatures between 400–700 °C (752–1,292 °F), with newer designs running at temperatures between 245–350 °C (473–662 °F).[6]

The Sodium–sulfur battery (or NaS battery), along with the related lithium sulfur battery employs cheap and abundant electrode materials. It was the first alkali metal commercial battery. It used liquid sulfur for the positive electrode and a ceramic tube of beta-alumina solid electrolyte (BASE) for the electrolyte. Insulator corrosion was a problem because they gradually became conductive and the self-discharge rate increased. This problem of dendritic-sodium growth in Na-S batteries was addressed in the development of the ZEBRA battery in 1985, which uses NaAlCl4 with Na+-beta-alumina ceramic electrolyte.[7]

The Na-NiCl
2 battery operates at 245 °C (473 °F) and utilizes molten sodium tetrachloroaluminate (NaAlCl
4), which has a melting point of 157 °C (315 °F), as the electrolyte. The negative electrode is molten sodium. The positive electrode is nickel in the discharged state and nickel chloride in the charged state. Because nickel and nickel chloride are nearly insoluble in neutral and basic melts, contact is allowed, providing little resistance to charge transfer. Since both NaAlCl
4 and Na are liquid at the operating temperature, a sodium-conducting β-alumina ceramic is used to separate the liquid sodium from the molten NaAlCl
4. The primary elements used in the manufacture of these batteries have much higher worldwide reserves and annual production than lithium.[11]

It was invented in 1985 by the Zeolite Battery Research Africa Project (ZEBRA) group at the Council for Scientific and Industrial Research (CSIR) in Pretoria, South Africa. It can be assembled in the discharged state, using NaCl, Al, nickel and iron powder. The positive electrode is composed mostly of materials in the solid state, which reduces the likelihood of corrosion, improving safety.[12] Its specific energy is 90 Wh/kg specific power of 150 W/kg. The β-alumina solid electrolyte is unreactive to sodium metal and sodium aluminum chloride. Lifetimes of over 1,500 cycles and five years have been demonstrated with full-sized batteries, and over 3,000 cycles and eight years with 10- and 20-cell modules.

The ZEBRA's liquid electrolyte freezes at 157 °C (315 °F), and the normal operating temperature range is 270 °C (518 °F) to 350 °C (662 °F). Adding iron to the cell increases its power response.[12] ZEBRA batteries are currently manufactured by FIAMM Sonick[13] and are used in the Modec Electric Van[citation needed], the IVECO daily 3.5 ton delivery vehicle,[citation needed] and the Th!nk City.[14] In 2011 the US Postal Service began testing all-electric delivery vans, one powered by a ZEBRA battery.[15]

In 2010 General Electric announced a Na-NiCl
2 battery that it called a sodium-metal halide battery, with a 20-year lifetime. Its cathode structure consists of a conductive nickel network, molten salt electrolyte, metal current collector, carbon felt electrolyte reservoir and the active sodium-metal halide salts.[16][17] In 2015, the company abandoned the project.[18]

Sumitomo developed a battery using a salt that is molten at 61 °C (142 °F), far lower than sodium based batteries, and operational at 90 °C (194 °F). It offers energy densities as high as 290 Wh/L and 224 Wh/kg and charge/discharge rates of 1C with a lifetime of 100 - 1000 charge cycles. The battery employs only nonflammable materials and neither ignites on contact with air nor risks thermal runaway. This eliminates waste-heat storage or fire- and explosion-proof equipment, and allows closer cell packing. The company claimed that the battery required half the volume of lithium-ion batteries and one quarter that of sodium–sulfur batteries.[19] The cell used a nickel cathode and a glassy carbon anode.[20]

In 2014 researchers identified a liquid sodium-cesium alloy that operates at 150 °C (122 °F) produced 420 milliampere-hours per gram. The new material was able to fully coat, or "wet," the electrolyte. After 100 charge/discharge cycles, a test battery maintained about 97% of its initial storage capacity. The lower operating temperature allowed the use of a less-expensive polymer external casing instead of steel, offsetting some of the increased cost of cesium.[21]

When not in use, Na-NiCl
2 batteries are typically kept molten and ready for use because if allowed to solidify they typically take 12 hours to reheat and charge.[citation needed] This reheating time varies depending on the battery-pack temperature, and power available for reheating. After shutdown a fully charged battery pack loses enough energy to cool and solidify in 3–4 days.[citation needed]

Professor Donald Sadoway at the Massachusetts Institute of Technology has pioneered the research of liquid metal re-chargeable batteries. Both Magnesium–antimony and more recently lead-antimony were used in experiments at MIT. The electrode and electrolyte layers are heated until they are liquid and self-segregate due to density and immiscibility. They may have longer lifetimes than conventional batteries, as the electrodes go through a cycle of creation and destruction during the charge-discharge cycle which makes them immune to degradation affecting conventional battery electrodes.[22] [23] [22]

In May 2014 Ambri received a $35 million investment.[29] By October 2014 the MIT team achieved an operational efficiency of approximately 70% at high charge/discharge rates (275mA/cm^2), similar to that of pumped-storage hydroelectricity and higher efficiencies at lower currents. Tests showed that after 10 years of regular use, the system would retain about 85% of its initial capacity.[30]

In September 2014 a study described an arrangement using a molten alloy of lead and antimony for the positive electrode, liquid lithium for the negative electrode; and a molten mixture of lithium salts as the electrolyte.