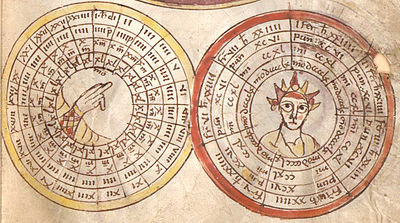 Two circular diagrams showing the division of the day and of the week, from a Carolingian ms. (Clm 14456 fol. 71r) of St. Emmeram Abbey. The day is divided into 24 hours, and each hour into 4 puncta, 10 minuta and 40 momenta. Similarly, the week is divided into seven days, and each day into 96 puncta, 240 minuta and 960 momenta.

A moment (momentum) was a medieval unit of time. The movement of a shadow on a sundial covered 40 moments in a solar hour. An hour in this case means one twelfth of the period between sunrise and sunset. The length of a solar hour depended on the length of the day, which in turn varied with the season,[1] so the length of a moment in modern seconds was not fixed, but on average, a moment corresponds to 90 seconds: A day was divided into 24 hours (of unequal lengths, twelve hours of the day and the night each), and an hour was divided into four puncta (quarter-hours), ten minuta and 40 momenta.

The unit was used by medieval computists before the introduction of the mechanical clock and the base 60 system in the late 13th century. The unit would not have been used in everyday life. For our medieval counterparts the main marker of the passage of time was the call to prayer at intervals throughout the day.

The earliest reference we have to the moment is from the 8th century writings of the Venerable Bede.[2] Bede describes the system as 1 hour = 4 points = 10 minutes = 15 parts = 40 moments. Bede was referenced four centuries later by Bartholomeus Anglicus in his early encyclopedia De Proprietatibus Rerum (On the Properties of Things).[3] Centuries after Bede's description, the moment was further divided into 60 ostents, although no such divisions could ever have been used in observation with equipment in use at the time.[2]