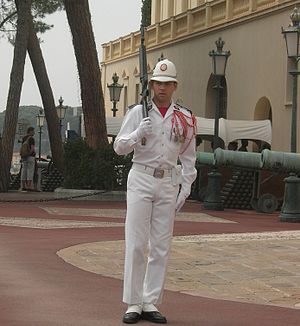 A member of the armed forces of Monaco on guard duty at the Prince's Palace.

The Principality of Monaco, which is the world's second smallest state (after the Vatican City State), has a very limited military capability, and would depend entirely upon its larger neighbour, France, for defence in the face of an aggressive world power.[1][2] All together there are 255 soldiers serving in Monaco's military (not including civilian employees who currently number 35 total), making its military the third smallest in the world (after Antigua and Barbuda and Iceland).[3][4]

Department of the Interior

The Minister of the Department of the Interior is appointed by the Prince for one five-year term, and is mainly responsible for both policing and military activity within Monaco.[5]

Some military roles are assigned to the civil police, such as border patrol and border defence, which are the responsibility of a special police unit officially named the "Maritime and Heliport Police Division," and which operates on land and sea using patrol boats and high-speed surveillance boats.[6] Patrol boats, which currently number four (see below), are also operated by both the Corps des Sapeurs-Pompiers (firefighters) and the Compagnie des Carabiniers du Prince (police).

Two full-time militarized armed forces exist under the control of the Department of the Interior. One is the Corps des Sapeurs-Pompiers de Monaco, and the other is the Compagnie des Carabiniers du Prince. Both units are key to the "ORMOS Red Plan" which makes provision for the evacuation of Monaco in case of natural disaster or civil emergency.

Describing itself as a military force,[7] the Corps consists of 10 officers, 26 non-commissioned officers and 99 other ranks, for a total force of 135 military personnel (there are also 25 civilian employees) providing fire, hazardous materials, rescue, and emergency medical services.[8] The officers' ranks (in descending order of seniority) are: colonel, lieutenant colonel, commandant, captain, lieutenant, and sub-lieutenant. There are a further nine ranks of non-commissioned officers and enlisted personnel. Officers generally have served in the French military's fire service. Based at two barracks (one in La Condamine and one in Fontvieille), the Corps is equipped with fire engines, rescue vehicles and a range of specialist vehicles, including a fire boat and sealed tracked vehicles for entering Monaco's railway tunnels during an emergency. 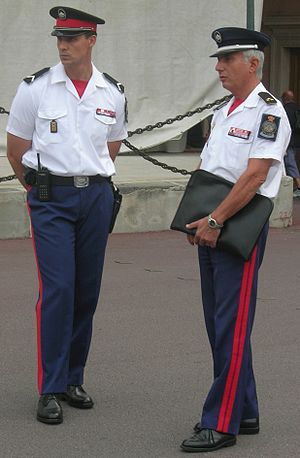 An enlisted soldier (left) and a commissioned officer (right) of the Prince's Carabiniers.

Of a similar size to the Corps des Sapeurs-Pompiers, the Compagnie des Carabiniers du Prince has a total force of 116, consisting of three officers, 15 non-commissioned officers and 98 enlisted men (there are also 14 civilian employees). The officers have usually trained and served with the French military. Its primary duty is the defence of the Prince and the Prince's Palace in the Monaco-Ville (old town) quartier of Monaco. By extension, it also has a role in guarding members of the judiciary, who administer justice in the name of the Prince.

There are a number of specialist units within the Compagnie des Carabiniers du Prince, which include a motorcycle section (for rapid-response and motorcycle outriding); a bodyguard and protection unit; a diving unit with military, rescue and scientific capabilities; a military first-aid unit that provides first-aid and ambulance cover at public and sporting events; and a military band, which includes state trumpeters, a brass ensemble and a small orchestra, as well as serving as a marching band for ceremonial purposes.[9]

The ceremonial "changing of the guard" at 11.55 AM each day attracts large numbers of tourists. The ceremony is more than just tourist spectacle, as this small military force is the front line of defence of the Monegasque royal family.

Enlisted soldiers and non-commissioned officers rise through a series of nine ranks, namely (in English translation): Private 2nd class, Private 1st class, Corporal, Chief Corporal, Sergeant, Chief Sergeant, Adjutant, Chief Adjutant, Major. For those used to the British/Commonwealth/American system of ranks, it is important to realise that "Major" is the senior non-commissioned rank in the French/Monegasque system, equivalent to "Sergeant-Major".

Commissioned officers rise through a series of six ranks, namely (in English translation): Sub-Lieutenant, Lieutenant, Captain, Commandant, Lieutenant Colonel, Colonel. As can be seen, in the French/Monegasque system the title 'Commandant' replaces the title 'Major' as used in the British/Commonwealth/American system. Also, there is no rank higher than 'Colonel' in either branch of the Monegasque military.