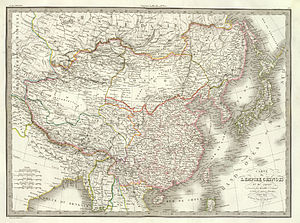 The Sino-Russian border within the regions of Mongolia, as it ran throughout the 19th century, largely corresponded to today's Mongolia–Russia border; the main difference is the absorption of Tuva into Russia

The Russian state expanded into the regions north of today's Mongolia in the 17th century. Much of the line of the today's Mongolia–Russia border line was set by the Treaty of Kyakhta (1727) between the Russian and Qing Empires (the Mongolia at the time being part of the Qing state); however, the treaty left Tuva on the Chinese (Qing) side of the border.

Mongolia's northern border assumed its nearly modern shape in 1911, as Tuva was separated from Mongolia in the breakup of the Qing Empire (see Mongolian Revolution of 1911), and soon became a Russian protectorate. Although an independent Tuvan People's Republic was declared in 1921, this small country became fully annexed into the Soviet Union in 1944, whereupon the former Mongolia–Tuva border became a section of the Mongolia–USSR border. The latter stayed stable for the rest of the USSR's existence, and continued as the Mongolia–Russia border after the dissolution of the USSR in 1991.

The eastern and western end points of the Mongolia–Russia border are "tripoints", i.e. junctions with the China–Russia border and the China–Mongolia border. A special trilateral agreement, signed on January 27, 1994 in Ulaan Baator, determines the location of these two "tripoints". The agreement is based on earlier bilateral treaties between the parties involved.[1]

The trilateral agreement states that no marker will be erected at the western tripoint,[1] which was defined as the peak of the mountain Tavan-Bogdo-Ula (Kuitunshan 奎屯山, Tavan Bogd Uul; elevation approx. 4081–4104 m, location, Lua error in Module:Coordinates at line 668: callParserFunction: function "#coordinates" was not found.[3]), due to its remote and hard to access location, on a mountain covered with eternal snows.[3]

At the border there are over 20 official crossing points, such as Altan - Agantsyn Gol, Tayrisin - Arshan, Bayan - Dzurh. Only one of them is a railway crossing (Naushki), the rest are highway crossings.[4] Some of the highway border crossing points are designated as "bilateral", rather than "multilateral", meaning that they are only open to the citizens of the two bordering countries, and not to third-country nationals.[4]

According to an article 2005, the main problems at the Russian-Mongolian border, specifically in its Republic of Tuva section, were cross-border livestock theft (in both directions) and smuggling of meat.[5] 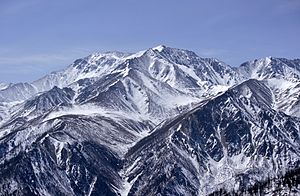 Provinces of Mongolia bordered by Russia

There are currently 8 provinces of Mongolia which border Russia:[6]