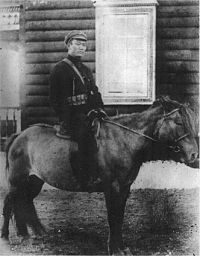 Creation of the army

One of the first actions of the new Mongolian People's Revolutionary Party authorities was the creation of a native communist army in 1920 under the leadership of adept cavalry commander Damdin Sükhbaatar in order to fight against Russian troops from the White movement and Chinese forces. The MPRP was aided by the Russian SFSR Red Army, which helped to secure the Mongolian People's Republic and remained in its territory until at least 1925.

Initially during the native revolts of the early 1930s and the Japanese border probes beginning in the mid-1930s, Soviet Red Army troops in Mongolia amounted to little more than instructors for the native army and as guards for diplomatic and trading installations. 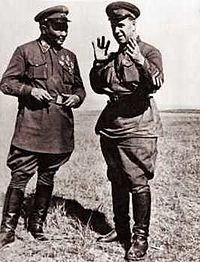 During the Pei-ta-shan Incident, elite Qinghai Chinese Muslim cavalry were sent by the Chinese Kuomintang to destroy the Mongols and the Russians in 1947.[1]

The military of Mongolia's purpose was national defense, protection of local communist establishments, and collaboration with Soviet forces in future military actions against exterior enemies, up until the 1990 Democratic Revolution in Mongolia.

The central Political Administration Unit was established in the army in 1921 to supervise the work of political commissars (Politruk) and party cells in all army units and to provide a political link with the Central Committee of the MPRP in the army. The unit served to raise morale and to prevent enemy political propaganda. Up to one third of army units were members of the party and others were in the Mongolian Revolutionary Youth League.

The Red Mongol Army received sixty percent of the government budget in early years and it to expanded from 2,560 men in 1923 to 4,000 in 1924 and to 7,000 in 1927. The native armed forces stayed linked to Soviet Red Army intelligence groups and NKVD, Mongolian secret police, and Buryat Mongol Comintern agents acted as administrators and represented the real power in the country albeit under direct Soviet guidance.

By 1926 the government planned to train 10,000 conscripts annually and to increase the training period to six months. Chinese intelligence reports in 1927 indicated that between 40,000 and 50,000 reservists could be mustered at short notice. In 1929 a general mobilization was called to test the training and reserve system. The expected turnout was to have been 30,000 troops but only 2,000 men presented. This failure initiated serious reforms in recruiting and training systems.

In 1921-1927 the land forces, almost exclusively horsemen, numbered about 17,000 mounted troops and boasted more than 200 heavy machine guns, 50 mountain howitzers, 30 field guns, seven armored cars, and a maximum of up to 20 light tanks.

The basic unit was the 2,000-man cavalry regiment consisting of three squadrons. Each 600-plus-man squadron was divided into five companies, a machine gun company, and an engineer unit. Cavalry regiments were organized into larger units--brigades or divisions—which included artillery and service support units. The chief advantage of this force was mobility over the great distances in Mongolia: small units were able to cover more than 160 km in 24 hours. 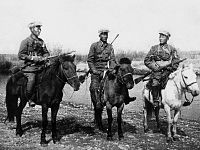 Mongolian cavalry in the Khalkhin Gol (1939)

Because establishment of the Armed Forces was based on a Soviet military system in 1920s, the Mongolian People's Army used similar uniforms with the Red Army, only with Mongolian distinctions. Until 1924, People's Army personnel wore traditional deel, which had their respective shoulder insignias. In the mid-1930s, the army adopted Soviet Gymnasterka and developed its true rank and distinction system. All personnel were distinct by their sleeve and collar insignias from the general population when the gymnastyorka was rather popular. After the Battle of Khalkhin Gol, slight modifications were made. In 1944 all uniforms and insignia were significantly changed to include shoulder insignia and camouflage cloaks, similar to Soviet uniform modifications but on olive green.

The Soviet-Russian and Mongolian tiled mural at the World War II en:Zaisan Memorial, Ulan-Bator, from the People's Republic of Mongolia era.

A Horsemen with by Soviet similar uniform performs during the opening ceremony for exercise Khaan Quest 2013 at the Five Hills Training Area in Mongolia Aug. 3, 2013

Units of Mongolian People's Army were supported and allied with the Soviet Red Army in the Battle of Khalkhin Gol in 1939 and on the western flank of the Soviet invasion of Manchuria in 1945. Domestically, it took part in the suppression of the 1932 armed uprising. It also involved in many border conflicts against Manchukuo and the Kwantung Army (one of the largest parts of the Imperial Japanese Army) and the Chinese National Revolutionary Army. The Imperial Japanese Army recorded 152 minor incidents on the border of Manchuria between 1932 and 1934. The number of incidents increased to over 150 per year in 1935 and 1936, and the scale of incidents became larger.

In January 1935, the first armed battle, Halhamiao incident (哈爾哈廟事件, Haruhabyō jiken?) occurred on the border between Mongolia and Manchukuo.[2] Scores of Mongolian cavalry units engaged with a Manchukuo army patrol unit near the Buddhist temple of Halhamiao. The Manchukuo Army incurred slight casualties, including a Japanese military advisor.

Between December 1935 and March 1936, the Orahodoga incident (オラホドガ事件, Orahodoga jiken?)(ja) and the Tauran incident (タウラン事件, Tauran jiken?) (ja) occurred. In these battles, both the Japanese and Mongolian Armies use a small number of armoured fighting vehicles and military aircraft. 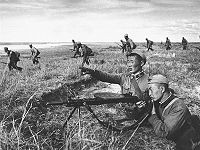 Mongolian troops fight against it took part Japanese counterattack on the western beach of river the Khalkhin Gol, 1939

Although little attention was paid to anti-aircraft weaponry in the Mongolian People's Army, a few dozen units of Soviet origin were known to be distributed to light armored outfits.

Under Soviet support campaign for mechanization, the army formed its first mechanized unit in 1922. Also it was by structure in the ground force half-mechanization cavalry in the other units distributed to light armored vehicles until 1943. It began to process to motorised since 1943. This is a list of Mongolian People's Army tanks and armour during the 1922s-World War II period.

The Mongolian People's Army Aviation drastically improved with Soviet training and vastly ameliorated within a time span of several years. In May 1925, a Junkers F.13 entered service as the first aircraft in Mongolian civil and military-related aviation. In March 1931, the Soviet Union donated three Polikarpov R-1s to the Mongolian People's Army, with Mongolia further purchasing three R-1s.[3] In 1932, an uprising broke out against Collectivization, which saw both Soviet and Mongolian-operated R-1s taking part in actions against the rebellion. The aircraft carried out reconnaissance, leaflet dropping, and bombing missions[4] Chinese intelligence reports that in 1945 the Mongolian People's Air Force had been with a three-fighter and three-bomber aviation-regiment, and one flight training school and greater air squadrons. It was reported that headquartered in the Mukden Manchukuo spy-section in October 1944 air force whole units had been 180 aircraft and 1231 flight and technical personnel. The Mongolian People's Army Aviation demonstrated its full potential during the Battle of Khalkhin Gol, which was its largest engagement. Apart from intercepting intruding aircraft, People's Aviation was used heavily to repress domestic rebel movements.

The Mongolian People's Air Force has operated a variety of aircraft types.

Group of Soviet Forces in Mongolia