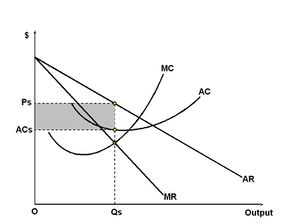 Short-run equilibrium of the firm under monopolistic competition. The firm maximizes its profits and produces a quantity where the firm's marginal revenue (MR) is equal to its marginal cost (MC). The firm is able to collect a price based on the average revenue (AR) curve. The difference between the firm's average revenue and average cost, multiplied by the quantity sold (Qs), gives the total profit. 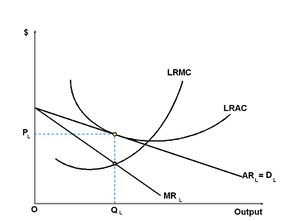 The long-run characteristics of a monopolistically competitive market are almost the same as a perfectly competitive market. Two differences between the two are that monopolistic competition produces heterogeneous products and that monopolistic competition involves a great deal of non-price competition, which is based on subtle product differentiation. A firm making profits in the short run will nonetheless only break even in the long run because demand will decrease and average total cost will increase. This means in the long run, a monopolistically competitive firm will make zero economic profit. This illustrates the amount of influence the firm has over the market; because of brand loyalty, it can raise its prices without losing all of its customers. This means that an individual firm's demand curve is downward sloping, in contrast to perfect competition, which has a perfectly elastic demand schedule.

There are six characteristics of monopolistic competition (MC):

MC firms sell products that have real or perceived non-price differences. However, the differences are not so great as to eliminate other goods as substitutes. Technically, the cross price elasticity of demand between goods in such a market is positive. In fact, the XED would be high.[7] MC goods are best described as close but imperfect substitutes.[7] The goods perform the same basic functions but have differences in qualities such as type, style, quality, reputation, appearance, and location that tend to distinguish them from each other. For example, the basic function of motor vehicles is the same—to move people and objects from point to point in reasonable comfort and safety. Yet there are many different types of motor vehicles such as motor scooters, motor cycles, trucks and cars, and many variations even within these categories.

There are many firms in each MC product group and many firms on the side lines prepared to enter the market. A product group is a "collection of similar products".[8] The fact that there are "many firms" gives each MC firm the freedom to set prices without engaging in strategic decision making regarding the prices of other firms and each firm's actions have a negligible impact on the market. For example, a firm could cut prices and increase sales without fear that its actions will prompt retaliatory responses from competitors.

How many firms will an MC market structure support at market equilibrium? The answer depends on factors such as fixed costs, economies of scale and the degree of product differentiation. For example, the higher the fixed costs, the fewer firms the market will support.[9] Also the greater the degree of product differentiation—the more the firm can separate itself from the pack—the fewer firms there will be at market equilibrium.

No entry and exit costs

In the long run there are no entry and exit costs. There are numerous firms waiting to enter the market, each with their own "unique" product or in pursuit of positive profits. Any firm unable to cover its costs can leave the market without incurring liquidation costs. This assumption implies that there are low start up costs, no sunk costs and no exit costs.

Each MC firm independently sets the terms of exchange for its product.[10] The firm gives no consideration to what effect its decision may have on competitors.[10] The theory is that any action will have such a negligible effect on the overall market demand that an MC firm can act without fear of prompting heightened competition. In other words, each firm feels free to set prices as if it were a monopoly rather than an oligopoly.

MC firms have some degree of market power. Market power means that the firm has control over the terms and conditions of exchange. An MC firm can raise its prices without losing all its customers. The firm can also lower prices without triggering a potentially ruinous price war with competitors. The source of an MC firm's market power is not barriers to entry since they are low. Rather, an MC firm has market power because it has relatively few competitors, those competitors do not engage in strategic decision making and the firms sells differentiated product.[11] Market power also means that an MC firm faces a downward sloping demand curve. The demand curve is highly elastic although not "flat".

No sellers or buyers have complete market information, like market demand or market supply.[12]

There are two sources of inefficiency in the MC market structure. First, at its optimum output the firm charges a price that exceeds marginal costs, The MC firm maximizes profits where marginal revenue = marginal cost. Since the MC firm's demand curve is downward sloping this means that the firm will be charging a price that exceeds marginal costs. The monopoly power possessed by a MC firm means that at its profit maximizing level of production there will be a net loss of consumer (and producer) surplus. The second source of inefficiency is the fact that MC firms operate with excess capacity. That is, the MC firm's profit maximizing output is less than the output associated with minimum average cost. Both a PC and MC firm will operate at a point where demand or price equals average cost. For a PC firm this equilibrium condition occurs where the perfectly elastic demand curve equals minimum average cost. A MC firm’s demand curve is not flat but is downward sloping. Thus in the long run the demand curve will be tangential to the long run average cost curve at a point to the left of its minimum. The result is excess capacity.[19]

Another concern is that monopolistic competition fosters advertising and the creation of brand names. Advertising induces customers into spending more on products because of the name associated with them rather than because of rational factors. Defenders of advertising dispute this, arguing that brand names can represent a guarantee of quality and that advertising helps reduce the cost to consumers of weighing the tradeoffs of numerous competing brands. There are unique information and information processing costs associated with selecting a brand in a monopolistically competitive environment. In a monopoly market, the consumer is faced with a single brand, making information gathering relatively inexpensive. In a perfectly competitive industry, the consumer is faced with many brands, but because the brands are virtually identical information gathering is also relatively inexpensive. In a monopolistically competitive market, the consumer must collect and process information on a large number of different brands to be able to select the best of them. In many cases, the cost of gathering information necessary to selecting the best brand can exceed the benefit of consuming the best brand instead of a randomly selected brand. The result is that the consumer is confused. Some brands gain prestige value and can extract an additional price for that.

Evidence suggests that consumers use information obtained from advertising not only to assess the single brand advertised, but also to infer the possible existence of brands that the consumer has, heretofore, not observed, as well as to infer consumer satisfaction with brands similar to the advertised brand.[20]

In many markets, such as toothpastes, Smart Phones and toilet paper, producers practice product differentiation by altering the physical composition of products, using special packaging, or simply claiming to have superior products based on brand images or advertising.