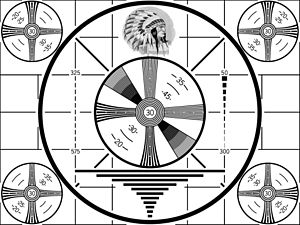 The widely used Indian Head test pattern was generated by a monoscope. 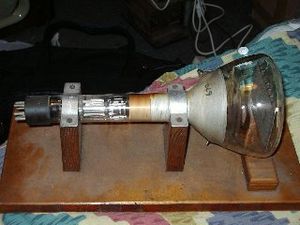 A monoscope was a special form of video camera tube which displayed a single still video image. The image was built into the tube, hence the name. The tube resembled a small cathode ray tube (CRT). Monoscopes were used beginning in the 1950s to generate TV test patterns and station logos. This type of test card generation system was technologically obsolete by the 1980s.

The monoscope was similar in construction to a CRT, with an electron gun at one end, but in place of a phosphor-coated screen which displayed an image, it had a metal target with an image formed on it. As the electron beam scanned the target, varying amounts of electrons were reflected from the different areas of the image. The reflected electrons were picked up by an internal electrode ring, producing a varying electrical signal which was amplified to become the video output of the tube.

This signal reproduced an accurate still image of the target, so the monoscope was used to produce still images such as test patterns and station logo cards. For example, the classic Indian Head test card used by NBC, shown on the right was often produced using a monoscope.

Monoscopes were available with a wide variety of standard patterns and messages, and could be ordered with a custom image such as a station logo. Monoscope "cameras" were widely used to produce test cards, station logos, special signals for test purposes and standard announcements like "Please stand by" and "normal service will be resumed....". They had many advantages over using a live camera pointed at a card; an expensive camera was not tied up, they were always ready, and were never misframed or out of focus. Indeed, monoscopes were often used to calibrate the live cameras, by comparing the monoscope image and the live camera image of the same test pattern.

Pointing an electronic camera at the same stationary monochrome caption for a long period of time could result in the image becoming burnt onto the camera tube's target — and even onto the phosphor of a monitor displaying it in extreme cases. 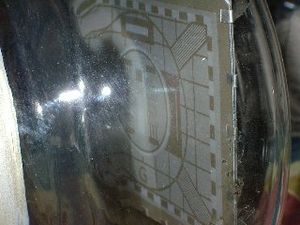 The target is Test Card G in this example

The monoscope declined in popularity during the 1960s due to its inability to generate a colour test card, and the development of solid state TV test pattern signal generators.