Montclair was first formed as a township on April 15, 1868, from portions of Bloomfield Township,[21] so that a railroad could be built to Montclair. After a referendum held on February 21, 1894, Montclair was reincorporated as a town, effective February 24, 1894.[22] It derives its name from the French mont clair, meaning "clear mountain" or "bright mountain."[23][24]

In 1980, after multiple protests filed by Montclair officials regarding the inequities built into the system,[25] Montclair passed a referendum changing its name to the "Township of Montclair" (as West Orange did similarly), becoming the third and fourth of more than a dozen Essex County municipalities to reclassify themselves as townships in order take advantage of federal revenue sharing policies that allocated townships a greater share of government aid to municipalities on a per capita basis.[26][27][28] 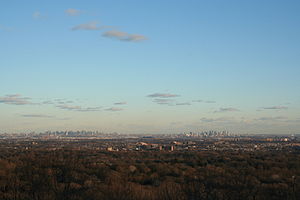 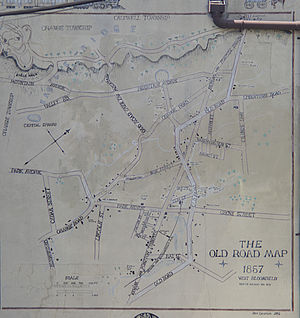 A mural of the road map of Montclair from 1857, when it was known as West Bloomfield.

Montclair is located on the First Mountain of the Watchung Mountains. Most of the township stands on the east side of this ridge. Thus, many locations provide excellent views of the surrounding area and of the New York City skyline about 12 miles (19 km) away. Since the formation of Montclair, the western border on that mountain with Verona, West Orange, and Cedar Grove has moved slightly eastward, making the township slightly smaller.

Montclair citizens use two main ZIP codes. The central and southern parts of the township are designated 07042. Upper Montclair lies north of Watchung Avenue and has a separate ZIP code, 07043. Because the ZIP codes do not exactly match municipal boundaries, a few homes near the borders with neighboring towns fall into the ZIP codes for those communities. A few homes in some adjoining municipalities use one of the two ZIP codes assigned to Montclair, as does HackensackUMC Mountainside (07042, formerly known as Mountainside Hospital), whose campus straddles the border with Glen Ridge.[30][31] Small areas in the southeast of the township fall into the Glen Ridge ZIP code 07028.

Several streams flow eastward through Montclair: Toney's Brook in the center, Nishuane Brook in the southeast, the Wigwam Brook in the southwest, the Pearl Brook in the northwest, and the Yantacaw Brook in the northeast - all in the Passaic River watershed. The Yantacaw and Toney's brooks are dammed in parks to create ponds. The Wigwam, Nishuane, and Toney's brook flow into the Second River, and the others flow into the Third River. Formerly, north of Bloomfield Avenue between Grove Street and Pine Street there was another dam and another pond, powering a factory. Montclair lies just north of the northernmost extent of the Rahway River watershed.

Montclair has a temperate climate, with warm-to-hot, humid summers and cool to cold winters, as is characteristic of the Köppen climate classification humid subtropical climate. January tends to be the coldest month, with average high temperatures in the upper 30s Fahrenheit and lows averaging 21. July, the warmest month, features high temperatures in the mid-80s and lows in the 70s, with an average high of 86 degrees. From April to June and from September to early November, Montclair experiences temperatures from the lower 60s to the lower 70s.

Montclair gets on average 44 inches (1,100 mm) of rain per year, above the United States average of 37 inches (940 mm). Snowfall is common from December to early March, and totals about 30 inches (760 mm) annually. The number of days each year in Montclair with any measurable precipitation is 90; the area has an average of 202 sunny days.

Montclair is one or two degrees warmer than the neighboring towns of Verona and Cedar Grove because of the mountain between them, which sometimes blocks winds and clouds, including warmer air from the ocean to the east.

Montclair has long highlighted its diversity, a feature that has attracted many to the community.[43]

As of 2012, 32.61% of the population were Catholic, 8.35% in Montclair were Jewish and 2.43% affiliate with Islam, with a small percentage of other denominations.[44] Proportionally, there are more Muslims, Jews, and Catholics than the country's average.

Montclair has attracted many who work for major media organizations in New York City, including The New York Times and Newsweek. A March 11, 2007, posting in the blog Gawker.com listed some of those who work in the media and live in Montclair.[45] In it also live many commuters to New York City and the Metro Area.

Montclair hosts many art institutions and theaters, and despite its relatively small size, has many art venues. It has its own art museum, the Montclair Art Museum, and several small galleries.

Montclair also hosts two theaters that showcase movies and films, both originally live theaters, having been later converted. Clearview Cinemas has two locations in Montclair, the Bellevue Theater located in Upper Montclair and the Clairidge Cinema, located on Bloomfield Avenue. While the Bellevue Cinema mostly shows main-stream Hollywood films, the Clairidge Cinema shows different types of movies from documentaries to small scale indie films. The township hosted its first annual film festival in 2012 to provide a platform for filmmakers from New Jersey, US and the world.[48]

Live theaters include The Montclair Operetta Company, the Wellmont Theatre, Montclair State University's Kasser Theater, Montclair State University's theater in Life Hall, and the Studio Playhouse. On Bloomfield Avenue there is a public stage used for concerts and other events. Dotted around Montclair there are also many art galleries, though most are centered in the Bloomfield Avenue Downtown Area.[49] Concerts are held at the Wellmont Theatre and at several churches and auditoriums sponsored by Outpost in the Burbs, a community-based organization.

Montclair was the setting for some of the stories in the HBO television series The Sopranos, and many Montclair streets, locations and businesses were featured in the show, such as Bloomfield Avenue.[50] 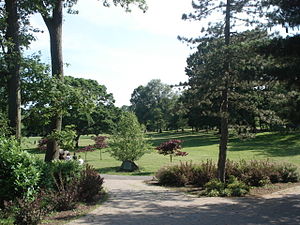 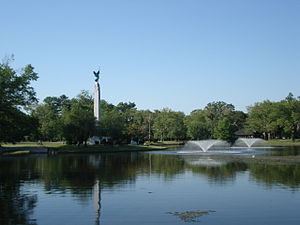 Montclair is home to many parks and nature reserves.

There are 18 public tennis courts, four skating rinks (two of which are indoor) and three public swimming pools, which are the Mountainside pool, the Nishuane pool, and the Essex pool.[54]

In 2007, township residents advocated for the building of a public skatepark.[55] Community members revitalized the effort in 2010 and lobbied the Parks and Recreation Committee for support, then the township council passed a resolution expressing approval of the project, but allocated no funds for it.[56][57][58] 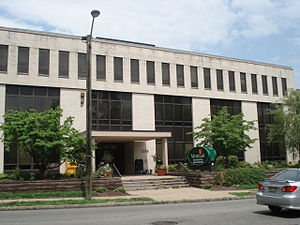 Montclair is governed under the Council-Manager plan 13 form of municipal government under the Faulkner Act, whose originator was a former mayor of Montclair, as implemented on July 1, 1988, by council-implemented action.[59] The government consists of a mayor and a six-member Township Council. The mayor and council are all elected to four-year terms in nonpartisan elections on a concurrent basis. The mayor and two council seats are elected at-large, with four council seats elected from each of four wards.[6] A deputy mayor is selected from the six council members, and this position is largely ceremonial.

Though the Mayor has no executive powers, the Mayor presides over council meetings and has both a voice and vote in its proceedings. The Mayor appoints members to many local governing groups, most notably the board of education.[60]

All of these routes except #97, #191, and #705 were trolley lines originally, operated by the Public Service Railway. A trolley garage existed on Bloomfield Avenue. In the 1930s and 1950s the trolleys were destroyed and replaced with buses.

Montclair State University has shuttle buses going around its campus.

The township of Montclair operates a jitney in the evening from the Bay Street train station to the southern end of Montclair.[109] 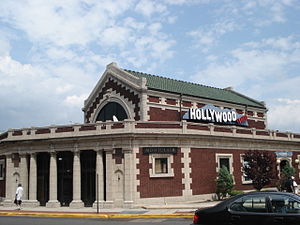 The former Lackawanna Railroad terminal, photographed when it housed a Hollywood Video

Montclair has a long history of railroads. The first railroad to Montclair was built in 1856 by the Newark and Bloomfield Railroad. It terminated at a station in Downtown Montclair. First the Morris and Essex Railroad, then the Delaware, Lackawanna and Western Railroad leased the line.

In 1868, the Montclair Railway built another line through Montclair, which caused disputes leading to Montclair's separation from Bloomfield. Shortly afterward it was taken over by the New York and Greenwood Lake Railway, a subsidiary of the Erie Railroad. A third railroad to Morristown was planned in 1860 and construction began, but the Panic of 1873 ended the project. In 1912 the Lackawanna Railroad built a large terminal at the end of their line. The Erie and Lackawanna Railroads later merged, forming the Erie-Lackawanna Railroad, which operated both lines for many decades. They were next operated by Conrail for approximately one year, after which NJ Transit took over passenger operations and Conrail continued freight operations. Meanwhile, the 1912 terminal was closed in 1981 and converted into shops. This station was replaced by the Bay Street station. In 2002, the two railway lines were connected with the construction of the Montclair Connection.[110]

There is a taxi stand off of Bloomfield Avenue in eastern Montclair, in front of Lackawanna Plaza, formerly the Montclair train station.

Montclair is noted for its historic architecture. It is home to six historic districts listed on the Register of Historic Places of both the state and country as a whole, 92 individually listed landmarks, and two locally designated commercial districts. Works by significant architects include designs by Van Vleck and Goldsmith, Charles Follen McKim, McKim, Mead, and White, Henry Hudson Holly, Charles A. Platt, Alexander Jackson Davis, Dudley Van Antwerp, Effingham R. North, Montrose Morris, and Frances Nelson, among others.[citation needed]

Montclair has also housed many hotels, such as the defunct Hotel Montclair. In 2013, plans were announced to bring a new hotel to Montclair, featuring 100 rooms and a liquor license.[111] 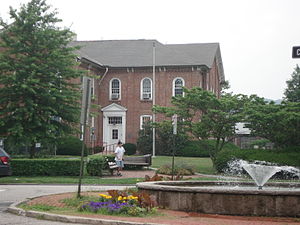 Board of Education Building

Montclair is home to Montclair State University, which was originally founded in 1908 as the New Jersey State Normal School at Montclair.[127] 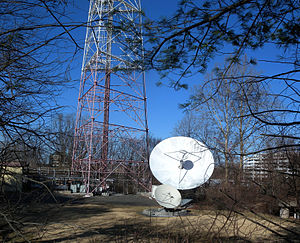 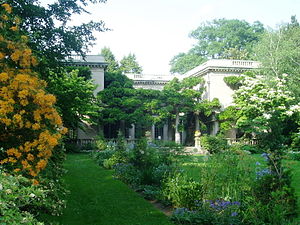 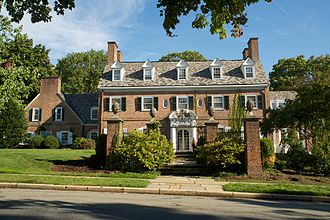 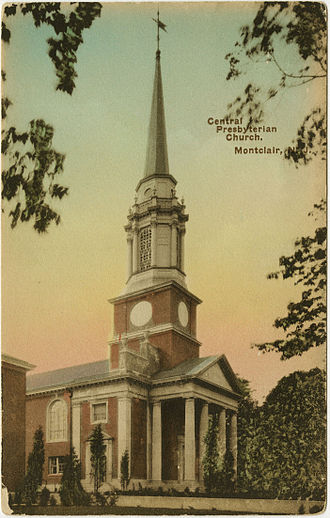 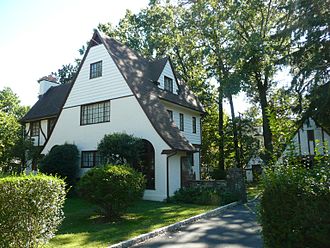 The House that Lives 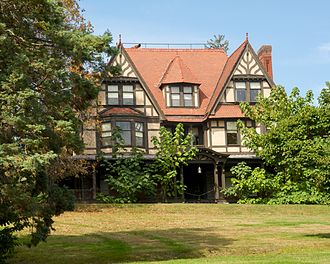 Montclair is home to the following locations on the National Register of Historic Places: