The Kingdom of Montenegro entered the era of flight with the opening of its first airport in the capital city of Cetinje. Its military followed suite with the use of aircraft in the Balkan Wars and in World War I and II. The country's first air units to be formed were the 111.lovacki Aviation Regiment in 1944 and the 172.lovacko bomber aviation regiment in 1949.[2]

Following the dissolution of the state union of Serbia and Montenegro, the newly formed Republic of Montenegro was left with a considerable number of aircraft at the Golubovci airbase, more than required for its own needs.[1] After the break-up, speculation arose regarding the division of the aircraft, but the Serbian Ministry of Defense issued a statement declaring that the eventual division of the fleet was not in either country's interest. However, a total of 11 G-4 Super Galebs, of which 8 are airworthy, were still located at the base in 2008. An official decision regarding their fate has not been made, but most likely they will not be operated by Montenegro due to expensive operating costs.[1] The four Utva 75 trainer aircraft have a better chance to become operational, although no decision about them has been made yet.[1] 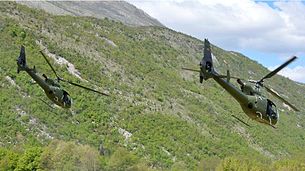 A pair of SA342 helicopters on lift off