Monthon (Thai: มณฑล) were administrative subdivisions of Thailand at the beginning of the 20th century. The Thai word monthon is a translation of the word mandala (maṇḍala, literally "circle"), in its sense of a type of political formation. The monthon were created as a part of the thesaphiban (เทศาภิบาล, literally "local government") bureaucratic administrative system, introduced by Prince Damrong Rajanubhab. Together with the monthon, today's present provinces (changwat), districts (amphoe), and communes (tambon) were established step-by-step throughout Thailand. Each monthon was led by a royal commissioner called thesaphiban (เทศาภิบาล), later renamed to samuhathesaphiban (สมุหเทศาภิบาล). The system was officially adopted by the 1897 Local Administration Act, after some monthon had been established and administrative details were sorted out.

Before the thesaphiban reforms, the country consisted of partially independent cities called mueang, some directly subordinate to the capital, some subordinate to larger mueang, or to one or more of the tributary kingdoms. Before the reforms, governors inherited their posts from their family lineage, and lived on taxes they collected in their area, a practice formally called tax farming. These were converted from hereditary governors to appointed governmental posts, as had been done by Chinese Yuan, Ming, and Qing-era rulers in first recognizing Tusi (tribal leaders) as imperial officials, then replacing them with imperial appointees. The arrangement resulted in governors being appointed and paid by the central government, and mueang developed into provinces. An essential step in the ending of tax farming was the creation on 3 September 1885 of the Royal Survey Department. Though its first fruits were not obtained until 1901, the department's cadastral surveys, i.e., surveys of specific land parcels, made possible the defining of ownership for land registration and equitable taxation. The term changwat (จังหวัด) for the provinces was first used in 1907 for the provinces in Monthon Pattani, and by 1916 had come into general use.

It took till around 1910 to implement the system throughout the country. The main reason for the slow implementation was the lack of suitably educated officials,[1] but also the resistance of the traditional local leaders, which recalled the 1768–1770 resistance of the monk Chao Phra Faang to Thonburi reestablishment of Siamese authority. In 1902 along both banks of the Mekong, local revolts (Prakottakan Phi Bun ปรากฏการณ์ผีบุญ) led by charismatic religious leaders called holy man or phi bun (ผีบุญ) broke out. The most serious of these was led by east-bank rebel Ong Keo against French authority in the former Thai tributary kingdom of Champasak. On the west bank in the area of Ubon Ratchathani, a less-well known former monk and phi bun headed a millenarian sect inspired by his apocalyptic prophecies, which spread fear, uncertainty and doubt among almost all the peoples along both banks of the river. The Bangkok government put down west bank resistance with little use of force, and cooperated with French Indochina officials insofar as limiting Thai authority to the west bank, later called Isan. East bank resistance however had no definitive end and became subsumed into the Second Indochina War.[2][3] Far from the Mekong, resistance to reform continued into the 21st century in the Southern Thailand insurgency.

In 1915 there were 19 monthon containing 72 provinces. Due to economic problems, several monthon were merged in 1925. Monthon Phetchabun had been dissolved in 1915. Only 14 monthon remained: Ayutthaya, Bangkok (Krung Thep), Chanthaburi, Nakhon Chaisi, Nakhon Ratchasima, Nakhon Sawan, Nakhon Si Thammarat, Pattani, Phayap, Phitsanulok, Phuket, Prachinburi, Ratchaburi, and Udon Thani. In 1932 another four were abolished: Chanthaburi, Nakhon Chaisi, Nakhon Sawan, and Pattani. Finally in 1933 the whole monthon system was abolished by the Provincial Administration Act 2476 B.E./A.D. 1933, part of the changes made after the coup d'état, which changed from an absolute to a constitutional monarchy, and the 70 provinces to second-level administrative divisions. 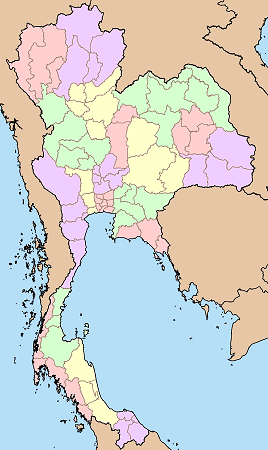