The Montreal Gazette, formerly titled The Gazette, is the only English-language daily newspaper published in Montreal, Quebec, Canada, after three other daily English newspapers shut down at various times during the second half of the 20th century. It is one of the French-speaking province's two last surviving English-language dailies; the other is the Sherbrooke Record, which serves the anglophone minority in the Eastern Townships southeast of Montreal.

Founded in 1778 by Fleury Mesplet, The Gazette is Quebec's oldest daily newspaper.[3] The oldest newspaper overall is the Quebec Chronicle-Telegraph (coincidentally, also the only English-language newspaper in its city), which was established in 1764 and is published weekly. 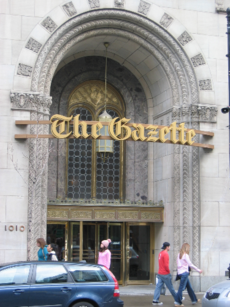 Offices of The Gazette in the Dominion Square Building on Saint Catherine Street in Montreal.

Fleury Mesplet founded a French-language weekly newspaper called La Gazette du commerce et littéraire, pour la ville et district de Montréal on June 3, 1778.[4] It was the first entirely French-language newspaper in Canada.[4] The paper did not accept advertising aside for the various books Mesplet also published. The articles were meant to promote discussion, and focused on literature and philosophy, as well as various anecdotal articles, poems and letters.[4] This paper, which was considered an organ for pro-American Revolutionary propaganda; Mesplet, an immigrant from France, had previously lived in Philadelphia, and sided with the Americans when they occupied Montreal during the American Revolutionary War. The newspaper was shut down in 1779 when Mesplet and the editor, Valentin Jautard were arrested for sedition and imprisoned for three years.

Mesplet began a second weekly, The Montreal Gazette / La Gazette de Montréal, on August 25, 1785, which had a dual French-English bilingual format similar to that used by the Quebec Gazette.[4] Its offices were located in the house of Joseph Lemoyne de Longueuil on rue de la Capitale.[5] French columns were in the left-hand column and English columns in the right-hand column. The columns were originally written in French and translated to English by Valentin Jautard, who served as editor until his death in 1787.[4] The columns were mostly on education, religion and literature, and after 1788 on politics.[4] Foreign and local news made up the rest of the paper. The paper took a Voltairian and anti-clerical stance, wanted Quebec to have its own legislative assembly, and sought to import the principles of the French revolution to Quebec.[4] The newspaper also introduced advertising and announcements, taking up half of four pages. It is the direct ancestor of the current newspaper. The newspaper did well, and Mesplet's operation moved to Notre-Dame Street in 1787. Mesplet continued to operate the newspaper until his death in 1794.[4]

Following Mesplet's death, his widow published the newspaper for several issues, but the paper ceased publication soon after. Two rivals, Louis Roy and Edward Edwards fought over the right to publish the newspaper over the course of two years.[5] Edwards eventually won the printing press and newspaper, and continued operations until his assets were seized in 1808.[5] The newspaper was then the property of James Brown for fourteen years. In 1822, it was sold to businessman Thomas Andrew Turner who converted into an English-only paper in 1822.[3][5] Under Turner, The Gazette identified with the interests of anglophone business leaders in their fight with the Patriote movement.[5]

On April 25, 1849, The Gazette published a special edition in which its editor-in-chief, James Moir Ferres, called the "Anglo-Saxon" residents to arms after Royal Assent of a compensation law for Lower Canada.[6] This was among the main events leading to the burning of the Parliament Buildings. Ferres was subsequently arrested.

In 1968, The Gazette was acquired by the Southam newspaper chain, which owned major dailies across Canada.[3]

For many years, The Gazette was caught in a three-way fight for the English newspaper audience in Montreal with the tabloid Montreal Herald and the broadsheet Montreal Star.[7] The Gazette was second in circulation to the Montreal Star, which sold more newspapers in the city and had a significant national reputation in the first half of the 20th century. The Montreal Herald closed in 1957, after publishing for 146 years. The Montreal Star, part of the FP Publications chain (which owned the Winnipeg Free Press and, at the time, The Globe and Mail), endured a long strike and ceased publication in 1979, less than a year after the strike was settled. 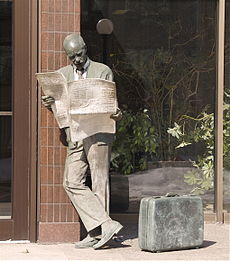 A statue in Westmount of man reading The Gazette.

In 1996, the Southam papers were bought by Conrad Black's Hollinger Inc. Then in August 2000, Hollinger sold the Southam newspapers, including The Gazette, to Canwest Global Communications Corp., controlled by the Winnipeg-based Asper family. In 2010, a new media group, Postmedia, bought the Gazette and other papers from the financially troubled Canwest.[7]

To celebrate its 150th anniversary, The Gazette published a facsimile of one of its earliest issues. Much effort was made to use a type of paper that imitated 18th century paper, with fake chainlines and laidlines to make the paper look old.[8]

Today, The Gazette's audience is primarily Quebec's English-speaking community. The Gazette is one of the four dailies published in Montreal, the other three being French-language newspapers (La Presse, Le Journal de Montréal, and Le Devoir).

In recent years, The Gazette has stepped up efforts to reach bilingual francophone professionals and adjusted its coverage accordingly. The current executive editor is Lucinda Chodan, the deputy editor is Katherine Sedgwick, and the managing editor is Catherine Wallace.[1]

Final version of the paper's logotype under the title The Gazette.

On April 30, 2013, Postmedia Network announced that it would be eliminating the role of publisher at each of its newspapers, including The Gazette. Instead, the company's 10 newspapers will be overseen by regional publishers--one each for the Pacific, the Prairies and eastern Canada. Alan Allnutt, who was the publisher of The Gazette at the time, became the regional publisher of Postmedia's Alberta and Saskatchewan papers. Gerry Nott, publisher of the Ottawa Citizen, now also oversees The Gazette, the Windsor Star and Postmedia's flagship title, the National Post.[9] On May 5, 2014, it was announced that printing of The Gazette would be contracted out to Transcontinental Media in August 2014 and that the existing Notre-Dame-de-Grâce facility would be closed, resulting in a loss of 54 full-time and 61 part-time positions at the paper. The August 16, 2014 issue was the final issue printed by the Postmedia-owned facility.[10][11]

On October 21, 2014, the Gazette was relaunched as part of the Postmedia Reimagined project, adopting a similar look, and similar suite of digital platforms, to its sister paper, the Ottawa Citizen, which had relaunched earlier in the year. As part of the relaunch, the paper was officially renamed the Montreal Gazette, reflecting its longstanding common name outside its city of publication (as well as its Web domain, montrealgazette.com). The paper had not included Montreal in its masthead in several years.[12] The new typeface and style introduced with the rename has been criticized as being "sub-par".[13]