The Montreal Public Libraries Network (Bibliothèques de Montréal in French, previously Réseau des bibliothèques publiques de Montréal in French) is the public library system on the Island of Montreal in Quebec, Canada. It is the largest French language public library system in North America. It also has items in English and other languages. Its central branch closed in March 2005 and the branch's collections were incorporated into the collections of the Grande Bibliothèque.

The municipally-run Montreal Public Libraries Network (as distinct from the provincial Bibliothèque et Archives nationales du Québec, which is also located in Montreal and requires its own library card) includes 67 libraries, including 44 libraries in the city of Montreal and 12 branches in other municipalities on the Island of Montreal. There are several additional branches which are privately funded public libraries within the system and which require a nominal membership fee. 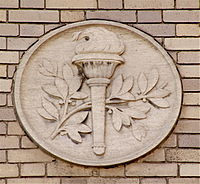