From Infogalactic: the planetary knowledge core
Jump to: navigation, search
This article is about geological phenomena. For other uses, see Moraine (disambiguation). 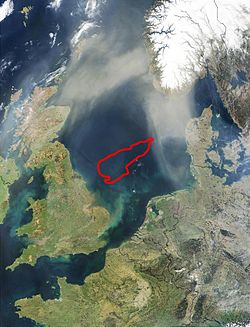 The red line marks Dogger Bank, which is most likely a moraine formed in the Pleistocene[1]

A moraine is any glacially formed accumulation of unconsolidated glacial debris (soil and rock) that occurs in currently glaciated and formerly glaciated regions on Earth (i.e. a past glacial maximum), through geomorphological processes.

Moraines may be composed of debris ranging in size from silt-sized glacial flour to large boulders. The debris is typically sub-angular to rounded in shape. Moraines may be on the glacier’s surface or deposited as piles or sheets of debris where the glacier has melted. Moraines may also occur when glacier- or iceberg-transported rocks fall into a body of water as the ice melts.

Debris could have been scraped off a valley floor as a glacier advanced or may have fallen off the valley walls as a result of frost wedging or landslide, when melting. 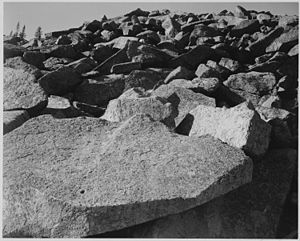 Moraines can be classified either by origin, location with respect to a glacier or former glacier, or by shape. The first approach is suitable for moraines associated with contemporary glaciers—but more difficult to apply to old moraines, which are defined by their particular morphology, since their origin is debated. Some moraine types are known only from ancient glaciers, while medial moraines of valley glaciers are poorly preserved and difficult to distinguish after the retreat or melting of the glacier. 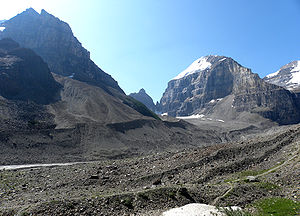 File:Glacier.zermatt.arp.750pix.jpg
Moraines clearly seen on a side glacier of the Gorner Glacier, Zermatt, Switzerland. The lateral moraine is the high snow-free bank of debris in the top left hand quarter of the picture. The medial moraine is the double line of debris running down the centre-line of the glacier.

Lateral moraines stand high because they protect the ice under them from the elements, causing it to melt or sublime less than the uncovered parts of the glacier. Multiple lateral moraines may develop as the glacier advances and retreats.

Ground moraines are till-covered areas with irregular topography and no ridges, often forming gently rolling hills or plains. They are accumulated at the base of the ice as lodgment till, but may also be deposited as the glacier retreats. In alpine glaciers, ground moraines are often found between the two lateral moraines. Ground moraines may be modified into drumlins by the overriding ice.

Rogen moraines or ribbed moraines are a type of basal moraines that form a series of ribs perpendicular to the ice flow in an ice sheet. The depressions between the ribs are sometimes filled with water, making the Rogen moraines look like tigerstripes on aerial photographs. Rogen moraines are named after Lake Rogen[2] in Härjedalen, Sweden, the landform’s type locality.

Main article: Terminal moraine
File:Erratics-Cascades-PB110028.JPG
Multiple erratics on the terminal moraine of the Okanogan Lobe. Cascade mountains in the background.

Recessional moraines are often observed as a series of transverse ridges running across a valley behind a terminal moraine. They form perpendicular to the lateral moraines that they reside between and are composed of unconsolidated debris deposited by the glacier. They are created during temporary halts in a glacier's retreat.[3][4]

A medial moraine is a ridge of moraine that runs down the center of a valley floor. It forms when two glaciers meet and the debris on the edges of the adjacent valley sides join and are carried on top of the enlarged glacier. As the glacier melts or retreats, the debris is deposited and a ridge down the middle of the valley floor is created. The Kaskawulsh glacier in the Kluane National Park, Yukon, has a ridge of medial moraine 1 km wide.

The prominent dark streak at the left quarter is forming a medial moraine.
This is seen as a mudflat at the water's surface. (Brüggen Glacier, Patagonia)

Supraglacial moraines are created by debris accumulated on top of glacial ice. This debris can accumulate due to ice flow toward the surface in the ablation zone, melting of surface ice or from debris that falls onto the glacier from valley sidewalls.

A Veiki moraine is a kind of hummocky moraine that forms irregular landscapes of ponds and plateaus surrounded by banks. It forms from the irregular melting of ice covered with a thick layer of debris. Veiki moraine is common in northern Sweden and parts of Canada.

A detailed geomorphological study of New York's Long Island provides evidence of glacial history of the kame and terminal moraines of the island which were formed by the advance and retreat of two ice sheets.[5] 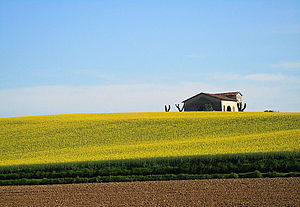