The M.S.406 was a French French Air Force fighter aircraft built by Morane-Saulnier starting in 1938. Numerically, it was France's most important fighter during the opening stages of World War II.

Although sturdy and highly maneuverable,[1] it was underpowered and weakly armed when compared to its contemporaries. Most critically, it was outperformed by the Messerschmitt Bf 109E during the Battle of France. The M.S.406 held its own in the early stages of the war (the so-called Phoney War), but when the war restarted in earnest in 1940, losses to all causes amounted to approximately 400 aircraft. Out of this total some 150 were lost to enemy fighters and ground fire, another 100 were destroyed on the ground in enemy air raids and the remainder was deliberately destroyed by French military personnel to prevent the fighters from falling into enemy hands intact. In return M.S.406 squadrons achieved 191 confirmed victories and another 83 probable victories.[2] The type was more successful in the hands of Finnish and Swiss air forces who developed indigenous models.

In 1934, the Service Technique Aéronautique (Aeronautical Technical Service) of the French Air Force issued the "C1 design" requirement for a new and completely modern single-seat fighter with a monoplane layout and retracting landing gear.

Morane-Saulnier's response was the M.S.405 developed by Engineer in Chief Paul-René Gauthier. The MS.405 was a low-wing monoplane of mixed construction, with fabric-covered wooden tail, but a bonded metal/wood material (Plymax) skin fixed to duralumin tubing. Plymax consisted of a thin sheet of duralumin bonded to a thicker sheet of plywood. Morane-Saulnier had a long history of producing warplanes dating back to pre-World War I years, but in the inter-war period, they had concentrated on civil designs. The aircraft was a departure for them, being their first low-wing monoplane, first with an enclosed cockpit, and first design with retracting landing gear. Prior to this, their most modern designs were fixed-gear parasol monoplanes. 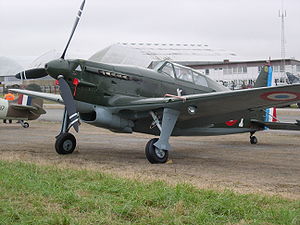 While the 406s were entering service in 1939, an upgrade series was started to improve the design. The result was the M.S.410, which included a stronger wing, simpler fixed radiator in place of the earlier retractable design, four belt-fed MAC guns in place of the earlier two drum-fed weapons, and exhaust ejectors for additional thrust. The added thrust boosted the top speed to 509 km/h (316 mph), an improvement of about 16 km/h (10 mph) over the 406.

Production had just started when France fell, and only five examples had been completed. Production was allowed to continue under German supervision, converting earlier 406s to the 410 standard, but many of these received only the new wings. Altogether 74 planes were modified.[5]

In 1939, Hispano started prototype deliveries of the new Hispano-Suiza 12Z engine of 969.4 kW (1,300 hp). One was fitted to a modified 410 to create the M.S.450, giving dramatic improvements in performance, especially at altitude. However the engine did not enter production before France fell, and the similarly modified Dewoitine D.520 (the D.523/D.551) was considered a better design for the engine anyway. 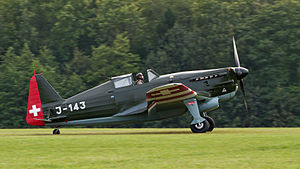 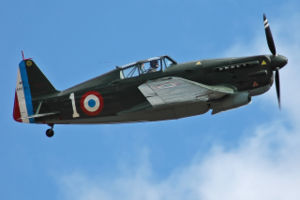 Pre-production started with a run of eight aircraft from EKW with engines built by Adolph Saurer AG driving a new Escher-Wyss EW-V3 fully adjustable propeller. Instruments were replaced with Swiss versions and the drum-fed MAC machine guns with locally designed and built belt-fed guns, so eliminating the wing-bulges of the French version, and avoiding the freezing problems encountered by French guns. The first of these aircraft was completed in November 1939. The pre-production models were then followed with an order for a further 74 examples, which were all delivered by 29 August 1940. In 1942, a further two were assembled with spares originally set aside for the original production run.[8][9][10]

During 1944, surviving aircraft were modified with new cooling and hydraulic installations, and were fitted with ejector exhausts. These modifications were the same standard as the D-3801 series, making them identical with the exception of the engine installation. At the end of the war the remaining aircraft were used as trainers, until the last one was scrapped in 1954.[11]

The Swiss continued development of the MS.412 when French involvement stopped following the June 1940 Armistice. The Dornier-Altenrhein factory completed a prototype powered with a licensed-produced HS-51 12Y engine, generating 790.4 kW (1,060 hp) together with the fixed radiator and revised exhausts as tested on the MS.411, in October 1940. The new type retained the armament changes and other improvements introduced on the D.3800.[12][13] This series was put into production in 1941 as the D-3801 with continued deliveries until 1945 with 207 completed. Another 17 were built from spares between 1947 and 1948.[12] Reliability of the new engine was at first extremely poor, with problems with crankshaft bearings causing several accidents. The engine problems slowed deliveries, with only 16 aircraft produced in 1942 and a single aircraft delivered in 1943. The engine problems were eventually resolved in 1944.[13] With 790.4 kW (1,060 hp) from the Hispano-Suiza 12Y-51, the speed was boosted to 534 km/h (332 mph), roughly equivalent to the D.520 or the Hurricane. Weights were between 2,124–2,725 kg (4,683–6,008 lb). After being retired from operational use as a fighter when the North American P-51 Mustang was acquired in 1948, the type remained in service as a trainer and target tug until 1959.[12][14] 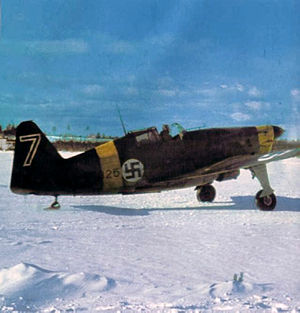 France sent 30 Morane-Saulnier to Finland, between 4 and 29 February 1940.[16] By 1943 the Finns had received an additional 46 M.S.406s and 11 M.S.410s purchased from the Germans. By this point, the fighters were hopelessly outdated, but the Finns were so desperate for serviceable aircraft that they decided to start a modification program to bring all of their examples to a new standard.

The aircraft designer Aarne Lakomaa turned the obsolete "M-S" into a first rate fighter, the Mörkö-Morane (Finnish for Bogey or Ogre Morane), sometimes referred to as the "LaGG-Morane". Powered by captured Klimov M-105P engines (a licensed version of the HS 12Y) of 820.3 kW (1,100 hp) with a fully adjustable propeller, the airframe required some local strengthening and also gained a new and more aerodynamic engine cowling. These changes boosted the speed to 525 kilometres per hour (326 mph). Other changes included a new oil cooler taken from the Bf 109, the use of four belt-fed guns like the M.S.410, and the excellent 20 mm (0.787 in) MG 151/20 cannon in the engine mounting. However, supplies of the MG 151 were limited, and several received captured 12.7 mm (0.500 in) Berezin UBS guns instead.

Originally, it was planned to convert all the 41 remaining M.S.406s and M.S.410s with the Soviet engine, but it took time, and the first front-line aircraft of this type did not reach LeLv 28 until July/August 1944.[17] By the end of the Continuation War in 1944, only three examples had been converted (including the original prototype).[18] Lieutenant Lars Hattinen (an ace with six victories) scored three kills with the Mörkö-Morane, one with each Mörkö-Morane in the squadron. More fighters arrived from the factory, though, and the Mörkö-Moranes took part in the Lapland War as reconnaissance and ground attack aircraft. Not all the Mörkö-Morane conversions were completed before March 1945, when the entire re-engining programme was halted.[17] After the end of the war, the total was brought to 41, which served as advanced trainers with TLeLv 14 until September 1948. In 1952 all remaining Finnish Moranes were scrapped.[19]

In the late 1930s, a war with Germany was clearly looming, and the French Air Force placed an order for 1,000 airframes in March 1938. Morane-Saulnier was unable to produce anywhere near this number at their own factory, so a second line was set up at the nationalized factories of SNCAO at St. Nazaire converted to produce the type. Production began in late 1938, and the first production example flew on 29 January 1939. Deliveries were hampered more by the slow deliveries of the engines than by lack of airframes.

By April 1939, the production lines were delivering six aircraft a day, and when the war opened on 3 September 1939, production was at 11 a day with 535 in service. Production of the M.S.406 ended in March 1940, after the original order for 1,000 had been delivered to the French Air Force, and a further 77 for foreign users (30 for Finland and 45 for Turkey). Additional orders for Lithuania and Poland were canceled with the outbreak of the war.

The MS 406 equipped 16 Groupes de Chasse and three Escadrilles in France and overseas, and 12 of the Groupes saw action against the Luftwaffe. The aircraft was very manoeuvrable and could withstand heavy battle damage, but was outclassed by the Bf 109 and losses were heavy (150 aircraft lost in action and 250–300 lost through other causes).[20] After the armistice, only one Vichy unit, GC. 1/7, was equipped with the MS. 406.[20]

Germany took possession of a large number of M.S.406s and the later M.S.410s. The Luftwaffe used a number for training, and sold off others. Finland purchased additional M.S.406s (as well as a few 406/410 hybrids) from the Germans, while others were passed off to Italy and some 48 to the Air Force of the Independent State of Croatia in 1943.[21] Those still in French hands saw action in Syria against the RAF, and on Madagascar against the Fleet Air Arm. Both Switzerland and Turkey also operated the type; the Swiss actually downed a number of both German and Allied aircraft, 1944–45.[22]

Before the Pacific campaign proper, Vichy authorities in French Indochina were engaged in a frontier war against Thailand, during 1940–41. A number of M.S.406s stationed in Indochina downed Thai fighters before the French Air Force abandoned the theatre. Some examples of the M.S.406 were captured by the Thai Air Force.

The M.S.406 had a parallel career in Finland. In February 1940, the first 30 French fighters were allocated to LeLv 28, commanded by Major Jusu. These aircraft received the Finnish designations MS-301 to MS-330. They were used in combat during the Winter War, against the USSR and carried out 259 operational sorties and shot down 16 Soviet aircraft.[16] In modified form, the M.S.406 were later involved in the Continuation War. Between November 1939 and 4 September 1944, Lv28 scored 118 aerial victories flying the Morane M.S.406 (the unit flew Bf 109Gs for a time, as well). The unit lost 15 aircraft.[21] Total Finnish kills were 121[citation needed]. The top Morane ace in all theatres was W/O Urho Lehtovaara, with 15 of his 44.5 total kills achieved in Moranes.[23] The Finnish nicknames were Murjaani ("moor" or "Negro"), a twist on its name, and Mätimaha (roe-belly) and Riippuvatsa (hanging belly) because of its bulged ventral fuselage. 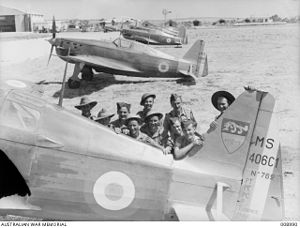 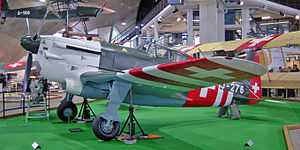 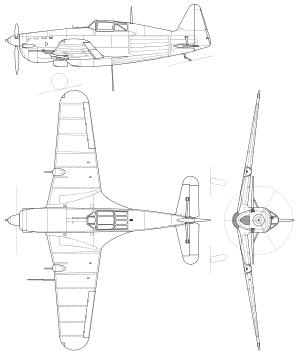 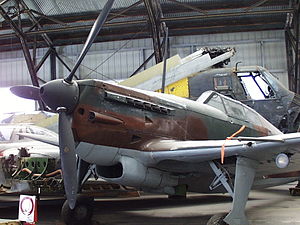 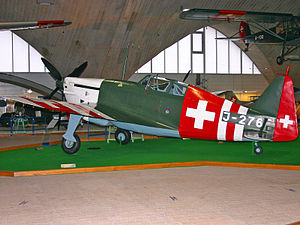 Data from The Great Book of Fighters[26]