From Infogalactic: the planetary knowledge core
Jump to: navigation, search
This article is about the Morena Municipal Corporation in Madhya Pradesh, India. For its namesake district, see Morena District. For other uses, see Morena (disambiguation).

Morena is a town in the Morena district, in the Indian state of Madhya Pradesh. It is governed by a municipality corporation. Located there are the administrative headquarters of the Morena district and of the Chambal division. It is 39 km from Gwalior, Madhya Pradesh. Morena is often mentioned in the popular Indian television series Miley Jab Hum Tum, as the place from where hail the two female protagonists. Paan Singh Tomar was born and lived in Bhidausa, Morena, as noted in the Hindi movie Paan Singh Tomar.

Morena is located at Lua error in Module:Coordinates at line 668: callParserFunction: function "#coordinates" was not found..[2] It has an average elevation of 177 metres (580 feet).

It is connected by rail and national highway with Gwalior and Agra. Oilseed milling and cotton weaving are the chief industries. The city has three colleges affiliated with Jiwaji University and two colleges affiliated with RGPV University. The surrounding region was formerly occupied by the princely states of Sheopur and Tonwarghar. The lower Chambal River basin consists of an alluvial tract in the north, cut by numerous ravines, and a forested area toward the south. Wheat and oilseeds are the main crops, and building stone is quarried. Morena is known for its peacocks[by whom?] (150,959 in 2001).

Gajak is a well-known sweet originating at Morena. It is made of sesame and jaggery specially manufactured in the winter season. Other local sweets include bedaai, gujia, and pede.

National Chambal Sanctuary, also called the National Chambal Gharial Wildlife Sanctuary, is a 5,400 km2 (2,100 sq mi) tri-state protected area in northern India for the critically endangered gharial (small crocodiles), the red-crowned roof turtle, and the endangered Ganges River dolphin. Located on the Chambal River near the tripoint of Rajasthan, Madhya Pradesh and Uttar Pradesh, the sanctuary was first declared in Madhya Pradesh in 1978 and now constitutes a long narrow eco-reserve co-administered by the three states. Within the sanctuary the pristine Chambal River cuts through mazes of ravines and hills with many sandy beaches.

The Pahargarh Cave Paintings are more than 30,000 years old on rocks of the Ashan River. They are 15 km from Fort Pahargarh.The Pahargarh State Ruled By Sikarwar Rajput Clan

Kakan Math Temple: Sas-Bahu Abhilekh reflects that Suhoniya, known as Sihoniya today, was the capital of the Kushwahas. The Kachwaha kingdom was established in the 11th century between 1015 to 1035 A.D. The Kachwaha king Kirtiraj had a Shiv temple erected at Sihoniya. This temple is known as the "Kakan Math" and was built without using any adhesive materials. It stand on a spot 2 miles (3 km) away from Sihoniya in the northwest part of the Morena district. It is said that Kakan Math was built by King Kirtiraj to fulfill the will of Queen Kakanwati. It is 115 feet (35 m) high and is built in the Kajurho style.

Jain Temples: Sihoniya is a holy place of the Jains. In the east of the village, there are the ruins of the Jain temples of the 11th century A.D. In these temples there are statues of the Tirthankars such as Shantinath, Kunthnath, Arahanath, Adinath, Parshvnath and others. The main temple has three statues: Shantinath, Kunthnath, and Arhanath, each 10 to 15 feet (3.0 to 4.6 m) in height. They are of the 11th century A.D.

Kuntalpur, known as Kutwar, is the largest ancient village of the Chambal valley. It is just like Hastinapur, Rajgraha and Chadi of the Mahabharat period. The ancient Amba or Harrisiddhi Devi temple and a crescent-shaped dam erected on the river Asan are the beautiful visiting spots of Kutwar. 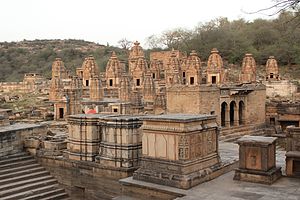 Padawali (Gupta Period): After the Naga period, the Gupta Empire was established in this area. The gotra (clan) of the emperors of the Gupta dynasty was Charan. 'Gharon' village was inhabited near modern Padawali. Around Gharon there are the ruins of several temples, houses and colonies. This new area of population is known as Padawali because it is surrounded by several hills. Here was a magnificent ancient Vishnu temple which was later converted into a big 'Garhi'. The terrace, the courtyard and the assembly hall of this temple are the epitome of ancient culture. The standing statue of a lion on the ruined gate seems to say that there was a time when he used to watch the temple with his companion at its gate. More than fifty monuments of different kinds can be seen at Padawali up to the valley of Bhuteshwar. 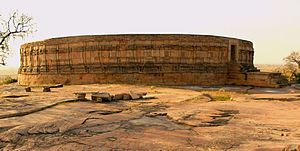 Mitawali: In the north of Naresar, there is a 64-yogini temple situated on the hundred foot high mountain. It is a wonderful circular construction of 170 feet (52 m) radius in the style of Delhi's Parliament House. Attached to the circular verandah are 64 rooms and a big courtyard in the temple. In the centre of the temple there is the circular temple of Lord Shiva and Lord Anuranjan.

Sabalgarh Fort: Amongst the monuments of the medieval age the fort of Sabalgarh is worth visiting. The beautiful 'Bandh' built behind the fort in the Scindia period has made the whole scene most fascinating. The foundation of Sabalgarh was laid by a 'Gujar' named Sabla in the past. Construction of the fort on a somewhat high cliff was made by Gopal Singh, the Raja of Karoli. Sikandar Lodhi sent a big army to hold control over this strongly built fort. The Marathas in their campaign of northern India again won it and gave it back to the king of Karoli. But in the year 1795 A.D. it was again taken from him by Khande Rao, whose big house still stands there. Lord Vallejali Daulat Rao Scindia (1764-1837) lived in the Fort of Gwalior during his regime. It was seized by the English in the year 1804-5. In 1809 the area around this fort was added to the kingdom of Scindia.

The Sersaini Fort is 35 km (22 mi) west of the district headquarters of Morena. Near the bank of the Chambal River is the well-established Sati Mata Mandir of the Sikarwar Suryavansi Rajput clan. Rao Dalpat Singh Urf Rao Dalkoo Sikarwar (also known as Dalkoo Baba) ruled over the Sersaini state in 1404 sambad (1347 AD). He defeated the Meena-Rawat king in the Battle of Sersaini on Holi Parwa day in 1404 Vikram sambad. The fort, built before 1000 CE, is in ruins. No people are living there at present. Bersaini is the only village near Sersaini Fort. The Sikarwar Rajput clan and Mallah are living in Bersaini at present. It is not served by any bus route. It is reached by foot or motorcycles/cycles only. A raas leela is organised every year on Dev Uthani Gyaras in the month of October by the Sikarwar Rajput clan.

Schools in the district include:

Morena is situated on National Highway 3. The roadway connects all the parts of the state and nearby states such as Rajasthan and Uttar Pradesh. The city is situated at the heart of India and can be reached from anywhere in the country through National Highway No. 3. The city has Mofussil (city-to-city) bus services with connections to nearby towns and villages. Buses from Morena connect to cities such as Agra, New Delhi, Gwalior, and Indore.

Distances from other major cities by road

Morena is well connected by train services to all parts of the country including Delhi, Mumbai, Chennai, Pune, Hyderabad, Jaipur, Indore and other major cities. Direct connections by train are available to these cities. Express trains such as the Bhopal Express, Taj Express and Bhopal Shatabdi and many more stop at Morena. Morena is located in between the Delhi-Bhopal Railway route; by train from Morena it takes four hours to reach Delhi and six hours to reach Bhopal. Morena Railway Station is classified under 80 A class stations across India. This railway station is famous for cold drinking water in summer by National Scouts and Guide.