Amsterdam was born Moritz Amsterdam in Chicago, Illinois, the youngest of the three sons of Max and Jennie (Finder) Amsterdam, Jewish immigrants from Austria-Hungary.[2]

He began working in vaudeville in 1922 as the straight man for his older brother's jokes. He was a cellist, a skill he used throughout his career. By 1924, he was working in a speakeasy operated by Al Capone.[1]

After being caught in the middle of a gunfight, Amsterdam moved to California and worked writing jokes[citation needed]. His enormous repertoire and ability to come up with a joke on any subject earned him the nickname The Human Joke Machine. He sometimes performed with a mock machine on his chest, hanging by a strap. He turned a hand crank and paper rolled out; he would then pretend to read the machine's joke, although actually the paper was blank[citation needed].

Amsterdam's reputation for humor preceded him. Hal Block tells of Amsterdam walking up Sixth Avenue in New York City and meeting an old friend. "Where have you been?" the friend asked. "Sick," Amsterdam replied, "I've been in bed with a cold." His friend looked at him and asked, "What's so funny about that?"[3]

During the 1930s, Amsterdam was a regular on The Al Pearce Show radio program, and by 1937 was the master of ceremonies on The Night Club of the Air.

Amsterdam also had a notable career as a songwriter, with his first popular success being "Why Oh Why Did I Ever Leave Wyoming." Amsterdam's most famous achievement as a songwriter was as the credited lyricist on the 1945 Andrews Sisters hit "Rum and Coca-Cola". However, the original version of the song was written and performed by a Trinidadian calypso singer named Lord Invader, and Amsterdam was subsequently involved in a copyright suit over the song, which dragged on until 1948. In the end, Lord Invader was given a substantial royalty payment for having written the original lyric to the piece, while Amsterdam retained the credit (and the publishing rights) for his revised version of the lyric.

In the early 1940s, he was a screenwriter, contributing dialogue for two East Side Kids films. He is listed as screenwriter for the 1943 film, The Ghost and the Guest.

By 1947, he was performing on three daily radio shows. Beginning in 1948, he appeared on the radio show Stop Me If You've Heard This One. The Morey Amsterdam Show aired on CBS radio from July 10, 1948 to February 15, 1949. For three months, it was on both radio and television with different scripts for the same premise and cast. He also did a radio show called the Laugh and Swing Club, broadcasting from the Filmart Theater on Vine street in Hollywood, in the late 1940s and early 1950s.

The Morey Amsterdam Show ran on CBS TV from December 1948 to March 1949 and on DuMont from April 1949 to October 1950. Among Morey's regular guests was song-and-dance man Art Carney[citation needed]. The cigarette girl was future author Jacqueline Susann, wife of the producer of the show, Irving Mansfield[citation needed]. Jazz musician Johnny Guarneri led the band[citation needed].

In 1950, he briefly hosted the comedy-variety show Broadway Open House, TV's first late-night entertainment show, on NBC.[1] One of the pioneering TV creations of NBC president Pat Weaver, it demonstrated the potential for late-night programming and led to the later development of The Tonight Show.[4] The show was originally to be hosted by comic Don "Creesh" Hornsby (so named because he yelled "Creesh" often), but he died of polio two weeks before the premiere broadcast. Hornsby's replacements, hosting different nights each week, were Amsterdam (Monday and Wednesday) and the raucous Jerry Lester (Tuesdays, Thursdays and Fridays), the brother of character actor Buddy Lester. Amsterdam soon exited the show, leaving Lester the sole host.

In February 1952, Amsterdam made his dramatic TV debut on an episode of the DuMont Television Network series Not for Publication.[5] In 1957, he appeared as Jack Connors in the third episode ("The Three Pretenders") of the syndicated television sitcom How to Marry a Millionaire, with Barbara Eden and Merry Anders.[6] 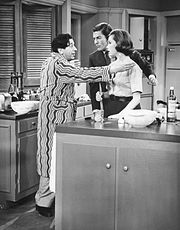 Amsterdam as Buddy, in this episode the house guest of Rob and Laura Petrie on The Dick Van Dyke Show, 1962.

In 1958, he appeared as saloon manager Lucien Bellingham in an episode of the CBS western series Have Gun, Will Travel entitled "The Moor's Revenge". He later guest-starred on the CBS sitcom Pete and Gladys, with Harry Morgan and Cara Williams.

His best-known role was as comedy writer Buddy Sorrell on The Dick Van Dyke Show, a role suggested for him by his friend Rose Marie, who also appeared on the show.[7] Amsterdam wrote lyrics for the show's theme song, which were never heard on the air, but have been performed by Dick Van Dyke in concert.[8] Van Dyke sang those lyrics on the October 23, 2010 edition of the NPR show Wait Wait... Don't Tell Me!.[9]

Amsterdam was an occasional panelist on Match Game and the short-lived Can You Top This? during the 1970s. He appeared as a small-time criminal in several episodes of the soap opera The Young and the Restless in the 1990s. Amsterdam and Rose Marie later appeared as panelists on The Hollywood Squares and guest-starred together in a February 1996 episode of the NBC sitcom Caroline in the City (his final TV appearance).

In 1958, Morey appeared in the low-budget film Machine-Gun Kelly with Charles Bronson, and he did a notable dramatic turn in the 1960 noir classic Murder, Inc. as Catskill nightclub owner Walter Sage, the first victim (according to the film) of the newly minted Murder, Incorporated.

Amsterdam played Cappy, owner of the local nightclub, in the Beach Party movies of the 1960s, which were produced by American International Pictures, of which he was a part-owner.[citation needed] He and Rose Marie also co-starred in the 1966 film, Don't Worry, We'll Think of a Title, a comedy co-written and co-produced by Amsterdam. The film features Richard Deacon, their co-star on The Dick Van Dyke Show, with cameos by the show's co-producer Danny Thomas and co-star Carl Reiner. His later roles included appearances in The Horse in the Gray Flannel Suit (1968) and Won Ton Ton, the Dog Who Saved Hollywood (1976).

Amsterdam died of a heart attack at Cedars Sinai Hospital in Los Angeles, California on October 28, 1996, at the age of 87.[1][10] He was survived by his wife Kay Patrick and their children, Gregory and Cathy. He was entombed at Forest Lawn - Hollywood Hills Cemetery in Los Angeles.