The Morris Commercial C8 FAT (Field Artillery Tractor), commonly known as a Quad, is an artillery tractor used by the British and Commonwealth (including Canadian Army) forces during the Second World War.[1] It was used to tow field artillery pieces, such as the 25-pounder gun-howitzer, and anti-tank guns, such as the 17-pounder.

Although its sloped sides suggest otherwise, the Quad was not armoured.

In 1937 the War Department identified a need for a new FAT to supplement, and then replace, the Light Dragon and Morris CDSWs then in service. A specification was issued for a four-wheeled, four-wheel drive vehicle, with winch, on a short chassis. Guy Motors produced their design quite quickly using existing components, and Morris followed with theirs. It was a totally new, but conventional, design evolved from the CS8.

It included a new four-cylinder engine mounted on a subframe and not directly onto the chassis. Like the Guy, the body had a very characteristic slope sided, "beetle back" shape. It was all-metal and designed to facilitate chemical weapon decontamination, as well as to enable a gun traversing platform to be carried on the rear roof section. In addition to 6 men, it was capable of carrying 24 complete boxed rounds of 25-pounder ammunition and at least 8 boxed antitank shells, together with vehicle and gun detachment equipment.

The first Morris C8 Quad was delivered in October 1939 and it then stayed in production until 1945. There were two major changes to the mechanical side of the vehicle, and two independent ones to the body. The engine/chassis design was used on other Morris types, such as the C8 Morris 15 cwt truck. A long-wheelbase version was used to produce the C9B self-propelled Bofors Light Anti-Aircraft Tractor.

As a FAT the Quad served with Field Artillery Regiments. Each regiment had 36 Quads; 24 towed a limber and gun, and 12 towed two limbers.

It was first issued in late 1939 and first used in action in France in 1940, towing 18-pounder, 18/25-pounder and 4.5-inch howitzers. Many were lost in the evacuation of the British Expeditionary Force (BEF) from France and as a result some of these were taken into service by the Wehrmacht.

From June 1940 it was also used to tow 75 mm guns provided by the USA; these were towed both with and without limbers. It was subsequently used wherever the FA Regts went, from Iceland to Malaya, primarily as a tractor for the, then new, 25-pounder gun. It was also used by most of the Commonwealth and Allied units equipped with the 25-pounder. 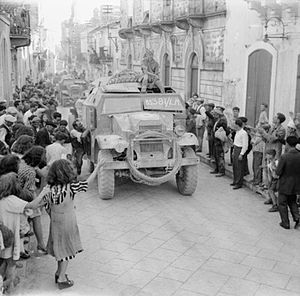 British troops of the 51st Highland Division in Morris Commercial C8 FATs towing 25-pounders, are cheered by crowds as they enter Militello, 15 July 1943

It was a popular vehicle although really too small for all the equipment that was carried. It was also underpowered when towing and loaded. Moving 9 tons with a 70 bhp engine was not ideal, and its speed uphill was unspectacular. Considerable use had to be made of the winch on hills and in mud. Later in the war, when the anti-tank regiments were equipped with 6-pounder and 17-pounder guns, Quads were issued as tractors. Normally these guns were towed without a limber but some 17-pounders were towed with limbers. This can only have been for the aid of the limber's brake, and a smoother tow, as the ammunition would not fit in a limber.

At the end of the War the Quad stayed in British service in the same roles. It saw extensive action in the Korean War and Malaya.

Many of the Commonwealth and Allied forces took their Quads to their home countries, and were provided with more ex-British ones to fully re-equip. The Royal Netherlands Army subsequently made extensive use of theirs in the East Indies.

The British rebuilt many of their Quads in the early 1950s, extending their useful life until 1959 when the last was sold off. They were replaced by three-ton tractors, derived from the Bedford RL and Fordson Thames E4. 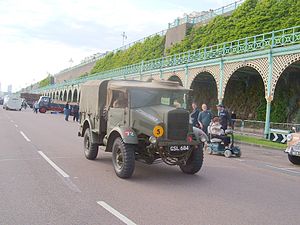 Only 200 made in 1939 and very early 1940. Front axle had provision for a locking differential, and the axle itself was mounted above the springs. The vehicle had permanent four-wheel drive and 10.50 × 20 inch tyres. The accelerator pedal was mounted centrally rather than in the conventional position as the right-most pedal.

Approximately 4000 made in 1940 and early 1941. It was almost identical to the Mk I, save for a change in front axle design, which removed the provision for the locking differential.

Approximately 6000 made from 1941 to 1945. The front axle was mounted below the springs, and four-wheel drive could be switched on or off as required. Tyres were 10.50 × 16 inch size, and the accelerator was mounted conventionally as the right pedal.

Three types of body were used:

Once the 18-pounder and 18/25-pounder had left service there was no requirement to carry the gun's traversing platform on the roof. The brackets for this were duly removed, and usually substituted by a framework to provide an additional area for the storage of kit.