The Saint Petersburg to Moscow Railway runs for 649.7-kilometre (403.7 mi) through four oblasts: Leningrad, Novgorod, Tver and Moscow. It is a major traffic artery in the north-west region of Russia, operated by the October Railway subdivision of Russian Railways. 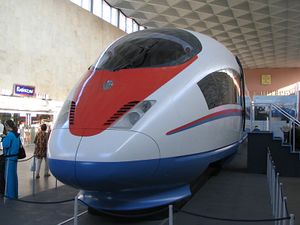 The maximum speed is 250 km/h (155 mph), the fastest train taking 3 hours and 30 minutes. The Siemens Velaro RUS train, also known as Sapsan, has operated on this line since 2009, running below their maximum speed of (300 km/h (186 mph)) because of difficulties upgrading all the track. Russian Railways spent nearly $1 billion on eight trains.

Since 1931 the famous Krasnaya Strela ("Red Arrow") train has left Moscow at 23:55 daily, arriving in St Petersburg at 07:55 the next morning, and vice versa.

The railway is relatively congested, which means that only a few high speed trains can run each day. There are plans to build a parallel high-speed railway allowing up to 400 km/h, at an estimated cost of 696 bn roubles with an estimated completion in 2018.[1] 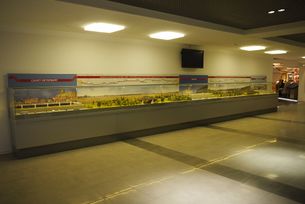 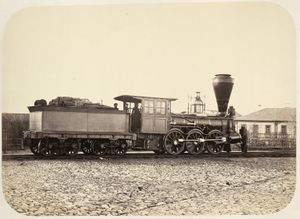 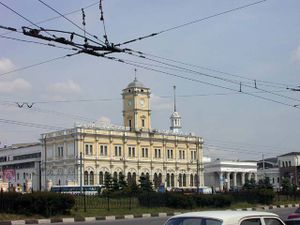 Leningradsky railway station (1851) in Moscow, the southern terminus of the line

The railway is the second oldest in the country, behind a short line connecting St Petersburg and Tsarskoye Selo. It was a pet project of Pavel Melnikov (1804–1880), an engineer and administrator who superintended its construction and whose statue may be seen near the southern terminus, the Leningradsky railway station in Moscow.

The idea of a railway connecting the two capitals gave rise to a prolonged controversy, with some reactionary officials predicting social upheaval if the masses were allowed to travel. It was decided that only the affluent would be allowed to use the line; every passenger was to be subjected to strict passport and police control.

Nicholas I of Russia, after whom the railway and the termini were named between 1855 and 1923, on 1 February 1842 issued an ukase ordering its construction. It was built by serfs with heavy loss of life, a fact bemoaned by Nikolay Nekrasov in his well-known poem The Railway.

The line was finally opened on 1 November 1851 after almost 10 years of construction and a great deal of financial machinations. The first passenger train left St Petersburg at 11:15 and arrived in Moscow at 21:00 the next day. When completed, the line was the longest double-track railway in the world.

Tsar Nicholas figures in an urban legend about the railroad. When it was planned in 1842, he supposedly demanded the shortest path be used despite major obstacles in the way. The story says he used a ruler to draw the straight line itself. However the false story became popular in Russia and Britain as an explanation of how badly the country was governed. By the 1870s, however, Russians were telling a different version, claiming the tsar was wise to overcome local interests that wanted the railway diverted this way and that. Actually what happened was that the road was laid out by engineers and he endorsed their advice to build in a straight line.[2]

The curve, also called the Verebinsky bypass, was actually built in 1877, 26 years after the line came into being, to circumvent a steep gradient that lasted for 10 miles. Heading for St Petersburg, trains would pick up so much speed that they steamed straight past the next station, while those heading for Moscow needed four locomotives to get up the hill.[3]

In 2001 a high-speed rail line (the first in Russia) was planned to be constructed along the same route, but the project was eventually shelved amid ecological protests and concerns about the fragile environment of the Valdai Hills. 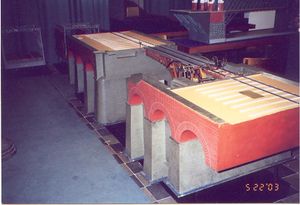 A bridge model of similar design to the Canton Viaduct at the October Railroad Museum in St. Petersburg

In 1842 Tsar Nicholas I summoned George Washington Whistler to work as a consulting engineer on the railway. Whistler designed a unique Canton Viaduct for the Boston and Providence Railroad in 1834 and is said to have designed two similar bridges on this railway, but this has never been confirmed. There is a bridge model of similar design to the Canton Viaduct on display at the Oktyabrsky Railroad Museum in St Petersburg.

On 13 August 2007 an intercity passenger train to St Petersburg from Moscow derailed shortly before reaching Malaya Vishera after a bomb explosion. There were 30 injuries and no deaths, and railway traffic was blocked in both directions for a few days.[4][5][6] Two men from the Ingushetia region of North Caucasus, Salambek Dzakhkiyev and Maksharip Khidriyev, were charged in relation to this incident.[6] They were acquitted in January 2010 on the terrorism charge, but sentenced to prison terms on related charges. The court decided they delivered the explosives to the person who actually planted them, the leader of the terrorist cell, Pavel Kosolapov, at large at time of the trial, but were not aware how it was going to get used.[7] Dzakhkiyev and his defense lawyer, Magomed Razakov, were also convicted of trying to bribe the investigator. Dzakhkiyev was sentenced to ten years' imprisonment, Khidriyev four years, Razakov two years two months.[8] The acquittal was upheld by the Supreme Court in March 2010.[9]

On 27 November 2009 four cars from train No. 166 derailed while travelling between Moscow and St. Petersburg.[10][11] The derailment was a terrorist act caused by the detonation of 7 kilograms (15 lb) of TNT equivalent.[12] At least 27 people were killed and 96 injured.[13][14] In a secondary explosion on 28 November, directed at investigators, Alexander Bastrykin, head of the Investigative Committee, was injured and hospitalised.[13]

The incident was reported to have similarities with the 2007 explosion.[6]

There are 32 direct express trains daily from Moscow to St Petersburg, from which the following are a selection.[15]

There are many more sleeper trains. International trains to nearby countries such as Finland and Estonia use this line.

The line runs only an absolutely unavoidable minimum of freight trains. However, with only one track in each direction (with the exception Moscow to Zelenograd, which has three tracks), expresses are often delayed by slower local commuter trains. Introduction of Sapsan service saw massive changes in suburban train timetables with some trains now having long stops at passing loops to allow overtaking and others cancelled, causing resentment in towns and settlements along the line.

A fourth track between Moscow and Zelenograd is under construction, and there are plans to extend the third track beyond Zelenograd to Tver.