The Moscow Canal (Russian: Кана́л и́мени Москвы́), named the Moskva-Volga Canal until the year 1947, is a canal that connects the Moskva River with the Volga River. It is located in Moscow itself and in the Moscow Oblast. The canal connects to the Moskva River in Tushino (an area in the north-west of Moscow), from which it runs approximately north to meet the Volga River in the town of Dubna, just upstream of the dam of the Ivankovo Reservoir. The length of the canal is 128 km.

It was constructed from the year 1932 to the year 1937[1] by Gulag prisoners during the early to mid Stalin era, under the direction of Matvei Berman. During the process, about 22,000 prisoners died.[2]

Thanks to the Moscow Canal, Moscow has access to five seas: the White Sea, Baltic Sea, Caspian Sea, Sea of Azov, and the Black Sea. This is why Moscow is sometimes called the "port of the five seas" (порт пяти морей). Apart from transportation, the canal also provides for about half of Moscow's water consumption, and the shores of its numerous reservoirs are used as recreation zones.

One of the world's tallest statues of Vladimir Lenin, 25-meter (82 ft) high, built in 1937, is located at Dubna at the confluence of the Volga River and the Moscow Canal. The accompanying statue of Joseph Stalin of similar size was demolished in 1961 during the period of de-stalinization.[3] 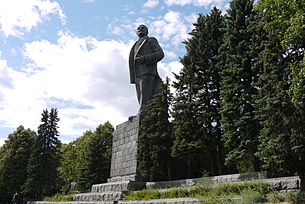