In the beginning of the second half of the 19th century Russian officials realized the need for re-organization of the Imperial Russian Army to meet new circumstances.[1] During May 1862, the War Ministry, headed by Army General Dmitry Milyutin, introduced to Tsar Alexander II of Russia proposals for the reorganization of the army, which included the formation of fifteen military districts. A tsarist edict of 6 August 1864, announced in a Defence Minister’s order on 10 August of the same year, established ten military districts, including Moscow. The District’s territory then comprised 12 provinces: Vladimir, Vologda, Kaluga, Kostroma, Moscow, Nizhniy Novgorod, Ryazan, Smolensk, Tambov, Tver, Tula, and Yaroslavl. The District was intended as a reinforcement source for troops and equipment, being some distance from the frontier, rather than an operational area.

The District dispatched five infantry and a cavalry division south to the Russo-Turkish War of 1877–8, as well as sending another division to the Caucasus area. This force totaled around 30,000 men and 20,000 horses. Over 80,000 men were also called into reserve units. The District also housed 21,000 Turkish prisoners of war. During the First World War over a million men were stationed in the district. Much of the garrison was involved in the October Revolution of 1917, and consequent establishment of a Soviet regime in the cities of Bryansk, Vladimir, Voronezh, Kaluga, Nizhniy Novgorod, Orel, Tver, Yaroslavl. By a resolution of the Moscow military revolutionary committee on 17 November [O.S. 4 November]  1917, Corps Commander N.I. Muralyov was assigned as the new commander of the district.

In the period of the Russian Civil War and military intervention in Russia 1917 - 22 the District prepared military personnel for all the fronts and supplied the Red Army with different forms of armament and allowances. From June to the middle of September 1919 the District conducted 33 callups totalling more than 500,000 people. In Moscow the 1 Moscow Rifle Division, Warsaw revolutionary infantry regiment, and 2nd revolutionary infantry regiment were formed, and Latvian forces were brought to the Latvian Rifles Division. In Voronezh two cavalry divisions were formed, two rifle divisions and two rifle regiments in Nizhniy Novgorod, and the 16th Rifle Division in Tambov. Artillery units too were also being raised in the capital area.

After the end of Civil War in the troops of region were demobilized, as a result of which their number was reduced from 580,000 (at the end of 1920) to 85,000 in January 1923, and the District was reorganised on a peacetime basis. In the 1920s the District had 10 rifle divisions: the 1st Moscow Proletariat Red Banner Rifle Division (first formed either in December 1924 or at the beginning of 1927), the 6th Оrlovskaya; the 14th Vladimirskaya; the 17th Nikhegorodskaya; the 18th Yaroslavskaya; the 19th Voronekhskaya; the 48th Tverskaya; the 55th Kurskaya; the 81st Kalukhskaya; and the 84th Tulskaya Rifles.[2] Autumn maneuvers began to be conducted yearly here in the district. The 2nd Rifle Corps was stationed in the district from 1922 to 1936. In the beginning of the 1930 tanks started to be introduced, including the MS or T-18, T-26, T-27, BT, T-28, and the heavy T-35. In 1930 the first mechanized infantry brigade in the Soviet Army was formed in the district. 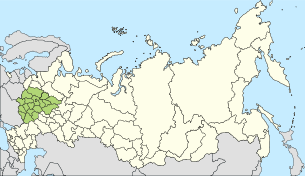 Moscow Military District Map as of 2009

The Russian Ground Forces' official site notes that the first tactical parachute landing took place in the District on 2 August 1930.

In World War II the District formed three fronts, 23 armies, 128 divisions of all arms, and 197 brigades of all arms, an approximate total of 4.5 million men. In 1944–5 alone the District sent to the front 1,200,000 soldiers. From summer 1945 to summer 1946, in order to supervise the demobilisation process, the District was subdivided into four: the Moscow, Voronezh (1949–60), Gorki (1945—1947, 1949—1953) (where the 324th Rifle Division was probably demobilised), and Smolensk Military Districts (33rd Army, home from Germany, formed Smolensk MD headquarters in late 1945). General Kirill Moskalenko took command of the District in 1953 and would later be a Marshal of the Soviet Union after leaving his post.

The Voronezh Military District was reactivated in 1949 and was active until 1960.

On 22 February 1968, for the large contribution to the cause of strengthening the defense of the state, for its successes in combat and political training, and in view of the 50th anniversary of the Soviet Army plus its important role in the 2nd World War, the District was awarded with the Order of Lenin.

The District's dispositions at the end of the 1980s were:[4] 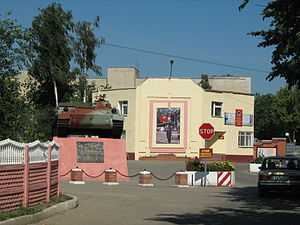 With the collapse of the USSR the District became for the first time in its history a boundary district and thus a new priority was put on building up combat forces within it, rather than the training and capital garrison focus of the Soviet period.

In the early 1990s the District received the headquarters of the First Guards Tank Army from the Group of Soviet Forces in Germany. It was relocated to Smolensk, and consisted of the 4th Guards Tank Division and 144th Guards Motor Rifle Division (at Yelnya). However the Army's headquarters disbanded later in the 1990s, along with the 144th Guards MRD. In addition, the 6th Guards Motor Rifle Brigade (ru:6-я гвардейская отдельная мотострелковая бригада) was withdrawn from Germany and restationed at Kursk.

The 22nd Army Headquarters was reformed from 13th Army Corps in the early 1990s, to control the new 3rd Motor Rifle Division among other formations. The 22nd Army had previously been inactive for a long period; it was last operational immediately after the war (when it participated in the Second Rzhev-Sychevka Offensive in late 1942) when its HQ along with the 109th Rifle Division arrived in the South Ukraine in May 1945. In the Northern summer of 1945, together with the headquarters of the Separate Coastal Army, located in the Crimea, it was reorganised as the new but short-lived Tavria Military District.

After several years as a direct reporting formation, the Operational Group of Russian Forces in Moldova was realigned under the command of the Moscow Military District in 1998.[7] Previously the 14th Guards Army (it was renamed in April 1995[8]), forces and individuals from this command played a major part in the early 1990s in establishing and maintaining the trans-Dnestr separatists of the Transnistria as a viable de facto state.

The District had around 75,000 troops assigned and consisted of the following formations. The entire Ground Forces began to go through a major reorganisation (the 2008 Russian military reform), which apparently began in March 2009, in which armies are becoming operational commands and divisions are being redesignated brigades.

In addition to normal units, the district was home at least until 2001 to the 11th Separate Cavalry Regiment (ru:11-й отдельный кавалерийский полк), a unit used for producing war films.[10] The unit was based at Kobyakovo. 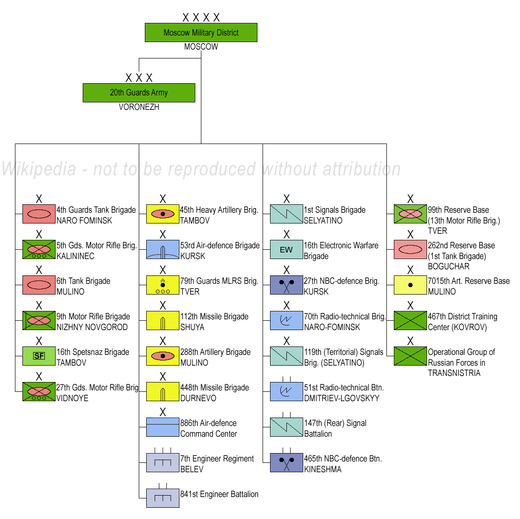 Structure and units of the Moscow Military District 2010

Army General Vladimir Bakin was the former chief of staff – first deputy commander-in-chief of forces of the Volga-Ural Military District.