From Infogalactic: the planetary knowledge core
Jump to: navigation, search
For the treaty ending the Continuation War in 1944, see Moscow Armistice.
For Moscow Peace Treaty, which was signed in 1920, see Soviet–Lithuanian Peace Treaty. 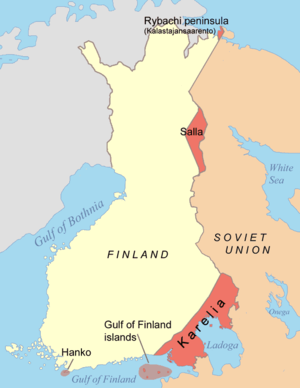 Areas ceded by Finland to the Soviet Union

The Moscow Peace Treaty was signed by Finland and the Soviet Union on 12 March 1940, and the ratifications were exchanged on 21 March.[1] It marked the end of the 105-day Winter War. The treaty ceded parts of Finland to the Soviet Union. However, it preserved Finland's independence, ending the Soviet attempt to annex the country. The treaty was signed by Vyacheslav Molotov, Andrey Zhdanov and Aleksandr Vasilevsky for Soviet Union, and Risto Ryti, Juho Kusti Paasikivi, Rudolf Walden and Väinö Voionmaa for Finland.

The Finnish government received the first tentative peace conditions from the Soviet Union (through Stockholm) on 31 January. Until then, the Red Army had fought to occupy all of Finland. By this point, the regime was prepared to temper its claims. The demands were that Finland cede the Karelian Isthmus, including the city of Viipuri, and Finland's shore of Lake Ladoga. The Hanko Peninsula was to be leased to the Soviet Union for 30 years.

Finland rejected these demands and intensified its pleas to Sweden, France and the United Kingdom for military support by regular troops. Although Finland in the long run had no chance against a country fifty times its size,[citation needed] the reports from the front still held out hope for Finland, anticipating a League of Nations intervention. Positive signals, however inconstant, from France and Britain, and more realistic expectations of troops from Sweden, for which plans and preparations had been made all through the 1930s, were further reasons for Finland not to rush into peace negotiations. (See Winter War#Foreign support for a detailed account.)

In February 1940, Finland's Commander-in-Chief marshal Mannerheim expressed his pessimism about the military situation, prompting the government to start peace negotiations on 29 February, the same day the Red Army commenced an attack against Viipuri (now Vyborg).

On 6 March, a Finnish delegation led by Prime Minister Risto Ryti travelled to Moscow.[2] During the negotiations, the Red Army broke through the Finnish defence lines around Tali and were close to surrounding Viipuri.

The Peace Agreement was signed on the evening of 12 March, Moscow time, i.e. 1 hour on March 13, Finnish time. The protocol appended to the treaty stipulated that the fighting should be ended at noon, Leningrad time (11:00 Finnish time),[3] and the fighting continued until that time.[4]

Finnish concessions and territorial losses exceeded those demanded by the Soviets pre-war. Finland was forced to cede nearly all of Finnish Karelia (with Finland's industrial center, including Vyborg/Viipuri, Finland's second largest city, Käkisalmi, Sortavala, and Suojärvi and the whole of Viipuri bay with its islands; in total, nearly 10% of the territory), even though large parts were still held by Finland's army. Military troops and remaining civilians were hastily evacuated to inside the new border. 422,000 Karelians, 12% of Finland's population, lost their homes.

There was also an area that the Russians captured during the war, which remained in Finnish hands according to the Peace Treaty: Petsamo. However, the peace treaty also stipulated that Finland would grant free passage for Soviet civilians through Petsamo to Norway.

Finland also had to cede a part of the Salla area, the Finnish part of the Kalastajansaarento (Rybachi) peninsula in the Barents Sea, and in the Gulf of Finland the islands of Suursaari, Tytärsaari, Lavansaari (now Moshchny Island о. Мощный), Peninsaari (now Maly Island, о. Малый) and Seiskari. Finally, the Hanko Peninsula was leased to the Soviet Union as a naval base for 30 years at an annual rent of 8 million marks.

Contrary to common belief, the Soviet troop transfer rights by railway to the Hanko base were not granted in the peace treaty, but they were demanded first on 9 July, after Sweden had acknowledged railway transit of Wehrmacht troops to occupied Norway.

Additional demands were that any equipment and installation on the ceded territories were to be handed over. Thus Finland had to hand over 75 locomotives, 2,000 railroad cars, a number of cars, trucks and ships. The Enso industrial area, which was clearly on the Finnish side of the border, as it was drawn in the peace treaty, was also soon added to the Finnish losses of territory and equipment.

The new border was not arbitrary from the Soviet viewpoint.

The Finns were shocked by the harsh peace terms. It seemed as if more territory was lost in the peace than in the war, and the loss was in many ways some of the highest valued parts of Finland:

Sympathy from world opinion seemed to have been of little worth. A certain bitter disappointment became a common feature of the Finns' view of other nations, not the least of Swedes, who had offered plenty of sympathy but did not fulfill their obligations of military support for Finland.

The harsh terms imposed on the Finns led them to seek support from the Third Reich. The Winter War and subsequent Moscow Peace Treaty were core factors in leading to what would become the Continuation War. In the end, this might have been a necessary condition for Finland's survival in the World War.

Only a year later, in June 1941, hostilities resumed in the Continuation War.