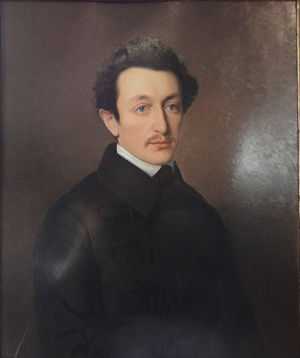 Portrait of Moses Hess in 1846

Moses (Moshe) Hess (21 January 1812 – 6 April 1875) was a German-Jewish philosopher, early communist and Zionist thinker.[1] His socialist theories, led to disagreements with Karl Marx and Friedrich Engels.[2] He is considered a founder of Labor Zionism.

Moses (Moshe) Hess was born in Bonn, which was under French rule at the time. In his French-language birth certificate, his name is given as "Moïse"; he was named after his maternal grandfather.[3][verification needed] His father was an ordained rabbi, but never practiced this profession.[4] Hess received a Jewish religious education from his grandfather, and later studied philosophy at the University of Bonn, but never graduated.[5]

He married a poor Catholic seamstress, Sibylle Pesch, "in order to redress the injustice perpetrated by society". Although they remained happily married until Hess' death,[6] Sibylle may have had an affair with Friedrich Engels while he was smuggling her from Belgium to France to be reunited with her husband. The incident may have precipitated Hess' split from the Communist movement.[7]

Hess was an early proponent of socialism, and a precursor to what would later be called Zionism. As correspondent for the Rheinische Zeitung, a radical newspaper founded by liberal Rhenish businessmen, he lived in Paris. He was a friend and important collaborator of Karl Marx, who was the editor of the Rheinische Zeitung, following his advice, and befriended also with Friedrich Engels.[8] Hess initially introduced Engels to communism, through his theoretical approach.[8]

Marx, Engels and Hess took refuge in Brussels, Belgium, in 1845, and used to live in the same street. By the end of the decade, Marx and Engels had fallen out with Hess.[8] The work of Hess was also criticized in part of The German Ideology by Marx and Engels.[9]

Hess fled to Switzerland temporarily following the suppression of the 1848 commune. He would also go abroad during the Franco-Prussian War of 1870–71. During the 1850s Hess immersed himself into studying the natural sciences and gaining, in an autodidactic fashion, a scientific foundation for his thoughts.[10]

Hess died in Paris in 1875. As he requested, he was buried in the Jewish cemetery of Cologne. In 1961, he was re-interred in the Kinneret Cemetery in Israel along with other Socialist-Zionists such as Nachman Syrkin, Ber Borochov, and Berl Katznelson.

Moshav Kfar Hess was named in his honour. 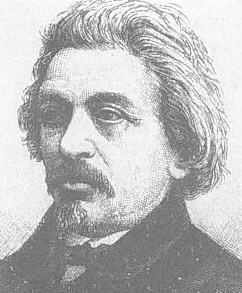 Hess became reluctant to base all history on economic causes and class struggle (as Marx and Engels did), and he came to see the struggle of races, or nationalities, as the prime factor of history.

According to George Litcheim, Hess, who differed from Marx on a number of issues, still testified in a letter to Alexander Herzen that what he and Herzen were writing about "resembles a neat sketch drawn on paper, whereas Marx's judgment upon these events [European upheavals] is as it were engraved with iron force in the rock of time" (Paraphrased by George Lichtheim, A Short History of Socialism, 1971 p. 80).

From 1861 to 1863, he lived in Germany, where he became acquainted with the rising tide of German antisemitism. It was then that he reverted to his Jewish name Moses (after apparently going by Moritz Hess)[11] in protest against Jewish assimilation. He published Rome and Jerusalem in 1862. Hess interprets history as a circle of race and national struggles. He contemplated the rise of Italian nationalism and the German reaction to it, and from this he arrived at the idea of Jewish national revival, and at his prescient understanding that the Germans would not be tolerant of the national aspirations of others and would be particularly intolerant of the Jews. His book calls for the establishment of a Jewish socialist commonwealth in Palestine, in line with the emerging national movements in Europe and as the only way to respond to antisemitism and assert Jewish identity in the modern world. 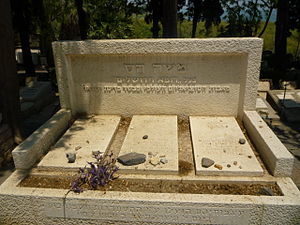 Hess's Rome and Jerusalem: The Last National Question went unnoticed in his time, as most German Jews preferred cultural assimilation. His work did not stimulate political activity or discussion. When Theodor Herzl first read Rome and Jerusalem he wrote that "since Spinoza Jewry had no bigger thinker than this forgotten Moses Hess." He said he might not have written Der Judenstaat (The Jewish State) if he had known Rome and Jerusalem beforehand. Vladimir Ze'ev Jabotinsky honored Hess in The Jewish Legion in the World War as one of the people that made the Balfour declaration possible, along with Herzl, Walter Rothschild and Leon Pinsker.