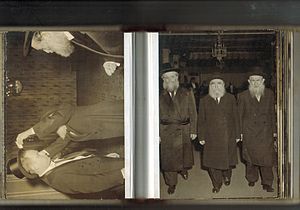 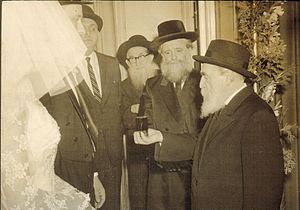 Rav Moses Feinstein (Hebrew: משה פיינשטיין‎; March 3, 1895 – March 23, 1986) was a Lithuanian Orthodox rabbi, scholar, and posek (an authoritative adjudicator of questions related to Jewish law), who was world-renowned for his expertise in Halakha and was regarded by many as the de facto supreme halakhic authority for Orthodox Jewry of North America. In the Orthodox world, he is widely referred to simply as "Reb Moshe", and his halakhic rulings are often referenced in contemporary rabbinic literature.

R' Moshe Feinstein was born, according to the Hebrew calendar, on the 7th day of Adar, 5655 (traditionally the date of birth and death of the Biblical Moshe) in Uzda, near Minsk, Belarus, then part of the Russian Empire. His father, Rabbi David Feinstein, was the rabbi of Uzdan. His father was a descendant of Rabbi Yom Tov Lipman, Rabbi of Kapolye, whose glosses on the Talmud have been published in the back of the Gemarah; and also the author of other Talmudic works.

He studied with his father and also in yeshivas located in Slutsk, Shklov and Amstislav, before being appointed rabbi of Lubań, where he served for sixteen years. He married Shima Kustanovich in 1920 and had 4 children (Pesach Chaim, Fay Gittel, Shifra, and David) before leaving Europe.[1] Under increasing pressure from the Soviet regime, he moved with his family to New York City in 1936, where he lived for the rest of his life.

Settling on the Lower East Side, he became the rosh yeshiva of Mesivtha Tifereth Jerusalem. He later established a branch of the yeshiva in Staten Island, New York, now headed by his son Rabbi Reuven Feinstein. His son Rabbi Dovid Feinstein heads the Manhattan branch.

He was president of the Union of Orthodox Rabbis of the United States and Canada and chaired the Moetzes Gedolei HaTorah of Agudath Israel of America from the 1960s until his death. Rabbi Feinstein also took an active leadership role in Israel’s Chinuch Atzmai.

Rabbi Feinstein was revered by many as the Gadol Hador (greatest Torah sage of the generation), including by Rabbis Yaakov Yisrael Kanievsky, Yonasan Steif, Elyah Lopian, Aharon Kotler, Yaakov Kamenetsky, and Yosef Shalom Elyashiv, even though several of them were far older than he. Feinstein was also recognized by many as the preeminent Torah sage and Posek of his generation, and people from around the world called upon him to answer their most complicated Halachic questions.

Owing to his prominence as an adjudicator of Jewish law,Rabbi Feinstein was asked the most difficult questions, in which he issued a number of innovative and controversial decisions. Soon after arriving in the United States, he established a reputation for handling business and labor disputes. For instance, he wrote about strikes, seniority, and fair competition. Later, he served as the chief Halakhic authority for the Association of Orthodox Jewish Scientists, which suited his growing involvement with Jewish medical ethics cases. In the medical arena, he fiercely opposed the early, unsuccessful heart transplants and, over time, it is unclear whether he shifted toward acceptance of brain death criteria; the last responsa, printed after he had died, suggests as much. On such matters, he often consulted with various scientific experts, including his son-in-law Rabbi Dr. Moshe Dovid Tendler, who is a professor of biology and serves as a rosh yeshiva at Yeshiva University.

As a leader of American Orthodoxy, moreover, Rabbi Feinstein issued opinions that clearly distanced his community from Conservative and Reform Judaism.[2] Nevertheless, he faced intense opposition within Orthodoxy on several controversial decisions, such as rulings on artificial insemination and eruv. In the case of his position not to prohibit cigarette smoking, other Orthodox rabbinic authorities disagreed. It should be noted that all his detractors, while disagreeing with specific rulings, still considered him to be a leading and venerated sage. The first volume of his Igrot Moshe, a voluminous collection of his halachic decisions, was published in 1959.[3] He made noteworthy decisions on the following topics:

Note: Responsa in Igrot Moshe are cited in parentheses 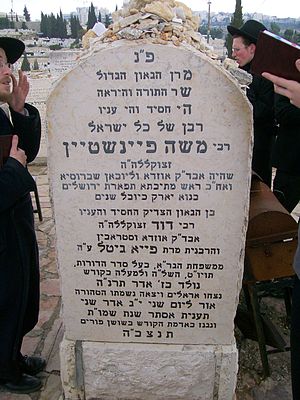 At the time, he was regarded as Orthodoxy's foremost halkhic authority and Posek. His funeral in Israel was delayed by a day due to mechanical problems to the plane carrying his coffin, which had to return to New York. His funeral in Israel was said to be the largest among Jews since the Mishnaic era, with an estimated attendance of 300,000 people. Among the eulogizers in America were Rabbis Yaakov Yitzchak Ruderman, Dovid Lifshitz, Shraga Moshe Kalmanowitz, Nisson Alpert, Moshe David Tendler, Michel Barenbaum and Mordechai Tendler and the Satmar Rebbe. The son of the deceased, Rabbi Reuven, also spoke.

Rabbi Feinstein was held in such great esteem that Rabbi Shlomo Zalman Auerbach, who was himself regarded as a Torah giant, Talmid Chacham and posek, refused to eulogize him, saying "Who am I to eulogize him? I studied his sefarim; I was his talmid (student)."

R' Moshe was buried on Har HaMenuchot in proximity to his teacher, Rabbi Isser Zalman Meltzer; his friend, Rabbi Aharon Kotler; his son-in-law Rabbi Moshe Shisgal, and next to the Belzer Rebbe.

Rabbi Feinstein invested much time molding some of his select students to become leaders in Rabbinics and Halacha. Those students, over the years, spent countless hours a day serving as apprentices to their great Rabbi. Most are considered authorities in many areas of practical Halacha and Rabbinic and Talmudic academics. Some of those students are:

Rabbi Feinstein's greatest renown came from a lifetime of responding to halachic queries posed by Jews in America and worldwide. He authored approximately 2,000 responsa on a wide range of issues affecting Jewish practice in the modern era. Some responsa can also be found in his Talmudic commentary (Dibros Moshe), some circulate informally, and 1,883 responsa were published in Igrot Moshe. Among Rabbi Feinstein's works:

Some of Rabbi Feinstein's early works, including a commentary on the Talmud Yerushalmi, were destroyed by the Soviet authorities.