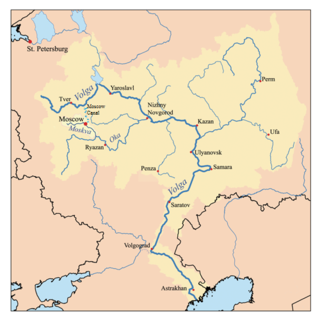 Map of the Volga watershed with the Moskva highlighted; the two rivers are directly connected by the Moscow Canal

The Moskva River (Russian: река Москва, Москва-река, Moskva-reka), also known as the Moscow River, is a river of western Russia. It rises about 140 km (90 mi) west of Moscow, and flows roughly east through the Smolensk and Moscow Oblasts, passing through central Moscow. About 110 km (70 mi) south east of Moscow, at the city of Kolomna, it flows into the Oka River, itself a tributary of the Volga, which ultimately flows into the Caspian Sea.

Moskva and Moscow are two different renderings of the same Russian word Москва. The city is named after the river. The origin of the name is unknown, ru. 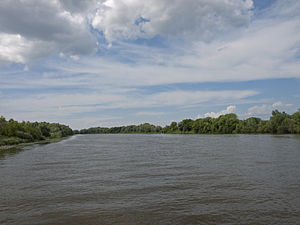 Moskva River in Kolomna, just upstream from its confluence with the Oka River 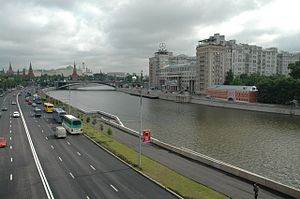 Moskva River in central Moscow, view towards the Kremlin

The river is 503 km (313 mi) long, with a vertical drop of 155 m (509 ft) (long-term average). The area of its drainage basin is 17,600 km2 (6,800 sq mi). The maximum depth is 3 metres above Moscow city limits, and up to 6 metres below it.[1] Normally, it freezes in November–December and begins to thaw around late March. In Moscow, the river freezes occasionally;[contradictory] during an unusually warm winter in 2006–2007, ice began melting on January 25. The absolute water level in downtown Moscow is 120.0 metres above sea level (long-term average of summer lows after World War II); a historical maximum of 127.25 metres above sea level was set by the 1908 flood.[2]

The main tributaries are the Ruza, Istra, Yauza, Pakhra, and Severka rivers. Sources of water are estimated as 61% thaw, 12% rain and 27% subterranean. Since completion of the Moscow Canal (1932–1937), the Moskva River has also collected a share of Upper Volga water. This has enabled reliable commercial shipping, which was previously interrupted by summer droughts (older dams built in 1785, 1836 and 1878 were not effective). The average discharge, including Volga waters, varies from 38 m³/s near Zvenigorod to 250 m³/s at the Oka inlet. The speed of the current, depending on the season, varies from 0.1 m/s (winter, dams closed) to 1.5–2.0 m/s (May, dams open). 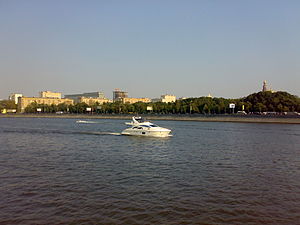 Boats on the Moskva River near the Luzhniki area of Moscow, with Novodevichy Convent at right

Moscow (Москва́), the capital of Russia, is situated on its banks. The river also flows through the towns of Mozhaysk, Zvenigorod, Zhukovsky, Bronnitsy, Voskresensk, and — at the confluence of the Moskva and Oka — Kolomna. As of 2007, there are 49 bridges across the Moskva River and its canals within Moscow city limits; the first stone bridge, Bolshoi Kamennyi Bridge, was erected in 1692. Within the city, the river is 120–200 metres wide, the narrowest point being under the Kremlin walls. Drinking water for the city of Moscow is collected from five stations on the Moskva River and from the Upper Volga reservoirs (north and north-west of the city).

Canals, built within Moscow city limits, have created a number of islands. Some of them have names in Russian, some have none. Major, permanent islands (west to east) are: 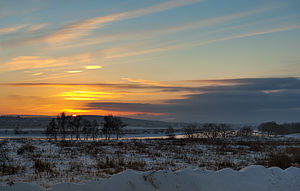 January 2012 Sunset near the Moskva River

There are five walking river ice breakers which ply on a route from a mooring Hotel Ukraine to the Novospassky Monastery and back. Duration of walk will make about 2 hours.[3]

The BrahMos missile, developed jointly by India and Russia, is named after the Brahmaputra river in India and the Moskva river in Russia