For other uses see: Moskvitch (disambiguation)

Moskvitch (Russian: Москвич) (sometimes also written as Moskvich, Moskvič or Moskwitsch) was an automobile brand from Russia produced by AZLK from 1946 to 1991 and by OAO Moskvitch from 1991 to 2002. The current article incorporates information about both the brand and the joint-stock successor of AZLK for the sake of simplicity.

OAO Moskvitch was a privatized venture name given to the former factory in order to avoid legal issues after the fall of the Soviet Union in 1991. Since the factory had no assembly branches outside Russia after 1991, its name is largely used today to refer to the building located in Lower Eastern part of Moscow and abandoned since 2006.

The word moskvitch (Russian: москвич) itself translates as "(a) Muscovite" into English. It was used to point out the original location of the cars manufactured outside of Russia's capital, Moscow.

In 1929 the construction of Moscow Automotive Plant began with initial production of 24,000 vehicles. In 1941 the plant was evacuated to Ural and the entire production converted for the manufacture of the military equipment at the dawn of World War II. After the war, the USSR acquired an entire Opel manufacturing line from Brandenburg in Germany.[1] A factory called MZMA (Moskovsky Zavod Malolitrazhnykh Avtomobiley, that is, Moscow Compact Car Factory) started in 1947 to manufacture an automobile called Moskvitch 400 based on the Opel Kadett. Further models were developed by Soviet engineers. In 1969, the factory changed name to AZLK (Avtomobilny Zavod imeni Leninskogo Komsomola, which means Car Factory in the name of the Leninist Communist Youth Union).

Moskvitch cars were never meant to be a fashion statement[citation needed]. They were sturdy, reliable on substandard roads and were offered at an affordable price. The 1960s and early 1970s were the glory days, when the cars were exported to many countries throughout the world. Demand always exceeded production, so people had to wait a long time for a new car. Until the 1980s all Moskvitch cars were compact rear-wheel drive saloons and estates with solid rear axles suspended by leaf springs.

Introduction of the Aleko

1986 saw the unveiling of a radically new (by Soviet standards) model, known as the Aleko-2141. It was powered by the 1.5L UZAM used in 412 model and VAZ-2106 1.6L in-line four-cylinder engines, which had by then amassed an acceptable track record powering a number of LADA models. Aleko was a front-wheel drive hatchback different from any model the factory had made previously. It was larger and more luxurious, made with comfort, safety and aerodynamics in mind. The body was built on the basis of Simca 1307, while longitudinal engine placement and torsion-crank rear suspension and MacPherson strut front suspension was inspired by Audi 80/100 family, while taking into account the larger size of the Moskvitch and Lada engines . The 1.8 liter gasoline engine for the new car was planned, but never materialized, as was also the case with a diesel version. The car was a major improvement over previous generations, but the fall of the centralised economy, below-par quality and inadequate management ultimately brought the factory to bankruptcy[citation needed].

The factory, which had been renamed to OAO Moskvitch (Moskvitch Joint Stock Company) in the early 1990s, filed for bankruptcy in 2002 and ceased production. The factory remains idle and abandoned, everything left as it was in 2002. Unfinished bodyshells remain on the production line in various stages of completion, while furniture, computers, office supplies, and documents remain in the plant's administration building. Several attempts to restart production have been made over the next 3 years, but none were successful.

Recently, a portion of the abandoned plant was acquired by OAO Avtoframos, a 38%-62% joint venture between the City of Moscow and French automaker Renault SA. In 2005, Avtoframos commenced assembly of Renault Logan sedans from imported complete knock-down kits (CKDs). The presence of Avtoframos brought new life to a small part of the facility, but the majority of the sprawling plant remains abandoned, apparently still owned by the dormant Moskvitch company.

The bankruptcy of OAO Moskvitch was officially announced in 2006 and the company was liquidated the following year.

Since 2009, the owner of the brand Moskvitch is the German automotive company Volkswagen. In 2011, the company extended its brand ownership rights until 2021, a 10-year period. 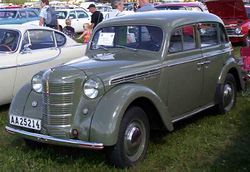