Mothers are women who inhabit or perform the role of bearing some relation to their children, who may or may not be their biological offspring. Thus, dependent on the context, women can be considered mothers by virtue of having given birth, by raising their child(ren), supplying their ovum for fertilization, or some combination thereof. Such conditions provide a way of delineating the concept of motherhood, or the state of being a mother. Women who meet the third and first categories usually fall under the terms 'birth mother' or 'biological mother', regardless of whether the individual in question goes on to parent their child. Accordingly, a woman who meets only the second condition may be considered an adoptive mother, and those who meet only the third a surrogacy mother.

The above concepts defining the role of mother are neither exhaustive nor universal, as any definition of 'mother' may differ based on how social, cultural, and religious roles are defined. The parallel conditions and terms for males: those who are (typically biologically) fathers do not, by definition, take up the role of fatherhood. It should also be noted that mother and fatherhood are not limited to those who are or have parented. Women who are pregnant may be referred to as expectant mothers or mothers-to-be, though such applications tend to be less readily applied to (biological) fathers or adoptive parents.[1][2] 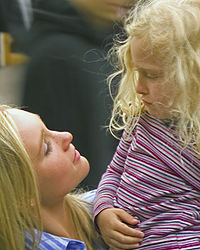 Mother with her child

Biological motherhood for humans, as in other mammals, occurs when a pregnant female gestates a fertilized ovum (the "egg"). Typically a fetus develops from the viable zygote, resulting in an embryo. Gestation occurs in the woman's uterus until the fetus (assuming it is carried to term) is sufficiently developed to be born. In humans, gestation is often around 9 months in duration, after which the woman experiences labor and gives birth. This is not always the case, however, as some babies are born prematurely, late, or in the case of stillbirth, do not survive gestation. Usually, once the baby is born, the mother produces milk via the lactation process. The mother's breast milk is the source of antibodies for the infant's immune system and commonly the sole source of nutrition for the first year or more of the child's life.[3][4][5]

Mother can often apply to a woman other than the biological parent, especially if she fulfills the main social role in raising the child. This is commonly either an adoptive mother or a stepmother (the biologically unrelated partner of a child's father). The term "othermother" or "other mother" is also used in some contexts for women who provide care for a child not biologically their own in addition to the child's primary mother.

Adoption, in various forms, has been practiced throughout history, even predating human civilization.[6] Modern systems of adoption, arising in the 20th century, tend to be governed by comprehensive statutes and regulations. In recent decades, international adoptions have become more and more common.

Adoption in the United States is common and relatively easy from a legal point of view (compared to other Western countries).[7] In 2001, with over 127,000 adoptions, the US accounted for nearly half of the total number of adoptions worldwide.[8]

Not all women who become pregnant via in vitro fertilization are surrogate mothers. Surrogacy involves both a genetic mother, who provides the ovum, and a gestational (or surrogate) mother, who carries the child to term. 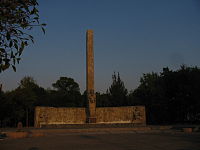 Monumento a la Madre in Mexico City. The inscription translates as "To her who loves us before she meets us".

Historically, the role of women was confined to some extent to being a mother and wife, with women being expected to dedicate most of their energy to these roles, and to spend most of their time taking care of the home. In many cultures, women received significant help in performing these tasks from older female relatives, such as mothers in law or their own mothers.[9] 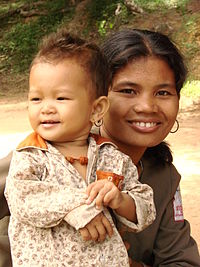 Mother and child in Cambodia

Regarding women in the workforce, mothers often entail a mommy track rather than being entirely career women. Mothers have historically fulfilled the primary role in raising children, but since the late 20th century, the role of the father in child care has been given greater prominence and social acceptance in some Western countries.[10][11] The 20th century also saw more and more women entering paid work.

Since the 1970s, in vitro fertilization has made pregnancy possible at ages well beyond "natural" limits, generating ethical controversy and forcing significant changes in the social meaning of motherhood.[17][18] This is, however a position highly biased by Western world locality: outside the Western world, in-vitro fertilization has far less prominence, importance or currency compared to primary, basic healthcare, women's basic health, reducing infant mortality and the prevention of life-threatening diseases such as polio, typhus and malaria.

Traditionally, and still in most parts of the world today, a mother was expected to be a married woman, with birth outside of marriage carrying a strong social stigma. Historically, this stigma not only applied to the mother, but also to her child. This continues to be the case in many parts of the developing world today, but in many Western countries the situation has changed radically, with single motherhood being much more socially acceptable now. For more details on these subjects, see legitimacy (law) and single parent.

Sub-Saharan African countries carry the highest risks in terms of maternal and infant mortality and health.

A maternal death is defined by WHO as "the death of a woman while pregnant or within 42 days of termination of pregnancy, irrespective of the duration and site of the pregnancy, from any cause related to or aggravated by the pregnancy or its management but not from accidental or incidental causes".[21]

About 56% of maternal deaths occur in Sub-Saharan Africa and another 29% in South Asia.[22]

The most recent data suggests that Italy, Sweden and Luxembourg are the safest countries in terms of maternal death and Afghanistan, Central African Republic and Malawi are the most dangerous.[24][25]

Childbirth is an inherently dangerous and risky procedure, subject to many complications. The "natural" mortality rate of childbirth—where nothing is done to avert maternal death—has been estimated as being 1500 deaths per 100,000 births.[26] Modern medicine has greatly alleviated the risk of childbirth. In modern Western countries the current maternal mortality rate is around 10 deaths per 100,000 births.[27] 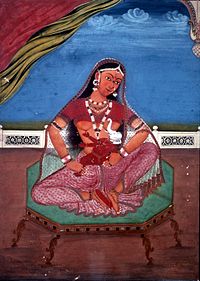 Nearly all world religions define tasks or roles for mothers through either religious law or through the glorification of mothers who served in substantial religious events. There are many examples of religious law relating to mothers and women.

Major world religions which have specific religious law or scriptural canon regarding mothers include: Christianity,[28] Judaism,[29] and Islam.[30] Some examples of honoring motherhood include the Madonna or Blessed Virgin Mother Mary for Catholics, and the multiple positive references to active womanhood as a mother in the book of Proverbs.

History records many conflicts between mothers and their children. Some even resulted in murder, such as the conflict between Cleopatra III of Egypt and her son Ptolemy X.

In modern cultures, matricide (the killing of one's mother) and filicide ((the killing of one's son or daughter) have been studied but remain poorly understood. Psychosis and schizophrenia are common causes of both,[31][32] and young, indigent mothers with a history of domestic abuse are slightly more likely to commit filicide.[32][33] Mothers are more likely to commit filicide than fathers when the child is 8 years old or younger.[34] Matricide is most frequently committed by adult sons.[35] 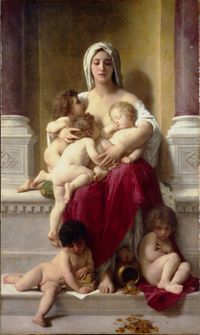 Throughout history mothers with their children have often been the subject of artistic works, such as paintings, sculptures or writings.

Fourth century grave reliefs on the island of Rhodos depicted mothers with children.[37]

Paintings of mothers with their children have a long tradition in France. In the 18th century, these works embodied the Enlightenment's preoccupation with strong family bonds and the relation between mothers and children.[38]

At the end of the nineteenth century, Mary Cassatt was a painter well known for her portraits of mothers. 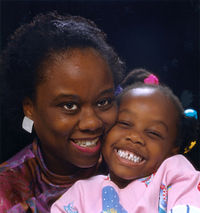 A mother and child
Main article: Mama and papa

The proverbial "first word" of an infant often sounds like "ma" or "mama". This strong association of that sound with "mother" has persisted in nearly every language on earth, countering the natural localization of language.

Familiar or colloquial terms for mother in English are:

In many other languages, similar pronunciations apply: