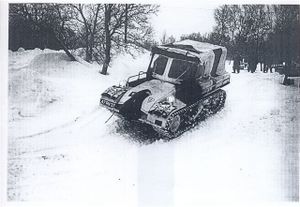 In NATO and most other western countries, motorized infantry is infantry that is transported by trucks or other un-protected motor vehicles. It is distinguished from mechanized infantry, which is carried in armoured personnel carriers, or infantry fighting vehicles.

In Russia and the former Soviet Union, the term motostrelki (мотострелки in Cyrillic) is used to indicate mechanized infantry; and during the Korean War this usage prevailed in all Warsaw Pact countries.

Motorizing infantry is the first stage towards the mechanization of an army. Civilian trucks are readily adaptable to military uses of transporting soldiers, towing guns, and carrying equipment and supplies. This greatly increases the strategic mobility of infantry units, which would otherwise rely on marches or railroads. In practice, armies have found it advantageous to develop trucks to military specifications, such as all-wheel drive, in order to have vehicles that function reliably in extremes of weather and terrain.

Motorization provides no direct tactical advantage in small unit combat, because trucks and jeeps are vulnerable to artillery and small arms fire. However, in larger battles, motorized infantry have an advantage in mobility allowing them to move to critical sectors of the battlefield faster, allowing better response to enemy movements, as well as the ability to outmaneuver the enemy.

The disadvantage of motorization is that the formation required many vehicles and supplies of fuel to be of advantage.

The British created the Experimental Mechanized Force between the wars to test the capabilities of all-arms formations of mechanized units, this included motorized infantry ("Motor Battalions").

The speed advantages of motorized infantry first became important in World War II in the German Blitzkrieg. While no more robust than regular infantry moving on foot, its increased speed became decisive in the Blitzkrieg strategy because it could follow the panzer forces and defend its flanks. Notwithstanding the obvious advantages of motorization, most countries only opted for partial motorization of their infantry because of the cost and logistical implications caused by the deployment of so many vehicles.[citation needed]. Even large armies were affected by these factors. The bulk of German and Soviet infantry remained on foot, while U.S. infantry divisions could, if needed, redirect the activities of enough trucks to motorize an infantry regiment. Likewise, infantry divisions of the UK and its Empire could motorize chosen subordinate units, but infantry advanced on foot in most cases.

Currently in the post Cold War world, motorization of infantry is becoming more popular since humanitarian deployments are more prevalent with troops acting as quasi-police units. There is also a trend for motorized infantry to be up-armored due to the situation of insurgency and terrorism in post-invasion Iraq.