This species is distributed from Fennoscandia to eastern Siberia; in addition there are isolated mountain populations in the Alps, Ireland, Scotland, the Baltics, northeastern Poland and Hokkaidō. The mountain hare has also been introduced to New Zealand, Iceland, Shetland, Orkney, the Isle of Man, the Peak District, Svalbard, Kerguelen Islands, Crozet Islands, and the Faroe Islands.[3][4][5] In the Alps, the mountain hare lives at elevations from 700 to 3800 m, depending on biographic region and season.[6] 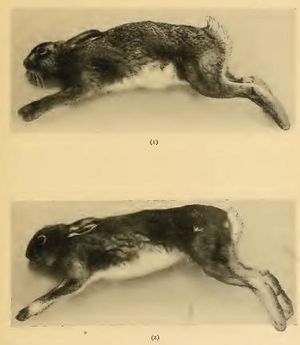 European hare (above) compared with a mountain hare 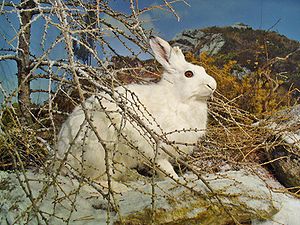 The mountain hare is a large species, though it is slightly smaller than the European hare. It grows to a length of 45–65 cm (18–26 in), with a tail of 4–8 cm (1.6–3.1 in), and a mass of 2–5.3 kg (4.4–11.7 lb), females being slightly heavier than males.[7][8] In summer, for all populations of mountain hares, the coat is various shades of brown. In preparation for winter most populations moult into a white (or largely white) pelage. The tail remains completely white all year round, distinguishing the mountain hare from the European hare (Lepus europaeus), which has a black upper side to the tail.[7] The subspecies Lepus timidus hibernicus (the Irish mountain hare) stays brown all year and individuals rarely develop a white coat. The Irish variety may also have a dark/grey upper surface to the tail, which in other populations always remains white. This tail colour combined with its large size (in comparison to most other populations of mountain hare) and the various shades of brown that the Irish hare may display, could lead an unexperienced observer to misidentify an Irish mountain hare as a European hare. 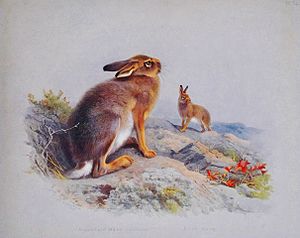 "Mountain, Irish Hare" illustration from "British Mammals" by A. Thorburn, 1920 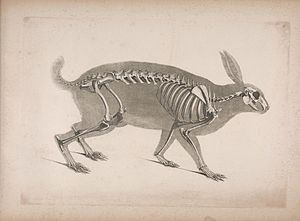 Studies have shown that the diet of the mountain hare varies from region to region. It seems to be somewhat dependent on the particular habitat that the population under study lives in. For example, in northern Scandinavia where snow may blanket the ground for many months, the hares may graze on twigs and bark. In areas where snowfall is rare, such as Ireland, grass may form the bulk of the diet. Given a choice, mountain hares in Scotland and Ireland seem to prefer feeding on grasses. One study looking at mountain hares on a coastal grassland environment in Ireland found that grasses constituted over 90% of the diet. This was higher than the percentage of grass in the diet of the European rabbit (Oryctolagus cuniculus) that inhabited the same environment. The mountain hare is regionally the favorite prey of the golden eagle and may additionally be predated by Eurasian eagle-owls and red foxes. Stoats may prey on young hares.[8]

Winter tourism in the European Alps has developed rapidly over the past few decades, leading to the expansion of ski resorts, growing numbers of visitors and a massive increase in snow sport activities such as free-ride skiing and snowboarding, backcountry skiing and snowshoeing. A study about such stress events and reactions of mountain hares indicated that mountain hares living in areas with frequent human winter recreational activities show changes in physiology and behaviour that demand additional energy in winter, when access to food resources is limited by snow. In the Alps the mountain hare lives at elevations from 700 to 3800 m above sea level depending on biographic region and season.[9]