Mulian Rescues His Mother (Chinese: 目連救母; pinyin: Mùlián jiù mǔ), or Mulian Saves His Mother From Hell is a popular Chinese Buddhist tale originating in the 3rd century CE, inspired by tales from India of Maudgalyayana, who becomes Mulian in the Chinese stories. Mulian, a virtuous monk, seeks the help of the Buddha to rescue his mother, who has been condemned to the lowest and most painful purgatory in karmic retribution for her transgressions. Mulian cannot rescue her by his individual effort, however, but is instructed by the Buddha to offer food and gifts to monks and monasteries on the 15th day of the 7th lunar month, which established the Ghost Festival (Chinese: 鬼 節; pinyin: guijie). The monk's devotion to his mother reassured Chinese that Buddhism did not undermine Confucian filial piety and helped to make Buddhism into a Chinese religion.

The story developed many variations and appeared in many forms. Tang dynasty texts discovered early in the 20th century at Dunhuang in Gansu revealed rich stories in the form of chuanqi (transmissions of the strange) or bianwen (transformation tales). Mulian and his mother appeared onstage in operas, especially folk-opera, and have been the subject of films and television series. The story became a standard part of Buddhist funeral services, especially in the countryside, until the end of the 20th century. The legend spread quickly to other parts of East Asia, and was one of the earliest to be written down in the literature of Korea, Vietnam, and Japan. [2]

The stages of the story

The Indian ancient classic, the Mahabarata, includes the story of an ascetic who sees his ancestors hanging upside down in purgatory because he has not married and provided them with heirs, and a Buddhist story concerned Maudgalyayana, a close disciple of the Buddha who rescues his mother from hell.[3] 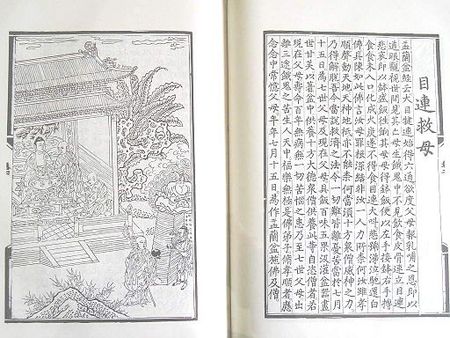 Mulian Intercedes With Buddha to Save His Mother

In the third century CE, the Yulanpen Sutra was translated from Sanskrit into Chinese.[4] Distinctively Chinese phrases describe how "Mulian," as the name was put into Chinese, used his "divine eyes" to see his mother's suffering, and pleaded with the Buddha. But the Buddha explained that "it is not within your power as a single individual to do anything about it," for her sins were deep and tenacious. Instead, on the 15th day of the 7th month he must gather the "sweetest, prettiest things of the world" and offer them to the monks, who at that time of year were emerging from their season of fasting. This Yulanpen Festival became associated with feeding and appeasing the spirits of deceased ancestors who would otherwise become "hungry ghosts," reconciling Buddhism with Chinese ideas of filial piety.[5]

In the Tang dynasty, Mulian was a popular topic of "sutra lectures" by monks. They often used pictures and songs to amuse their illiterate audiences, enriching the Mulian story with many variations and making it thoroughly Chinese. The story-tellers shaped their stories to meet the charge that Buddhism was "unfilial" because it took believers away from their families and prevented them from attending to their ancestors. The written versions of these stories were bianwen, or "transformation texts," of which a large number were preserved in the library cave at Dunhuang, an oasis in Central Asia, and not rediscovered until the 20th century.[6] 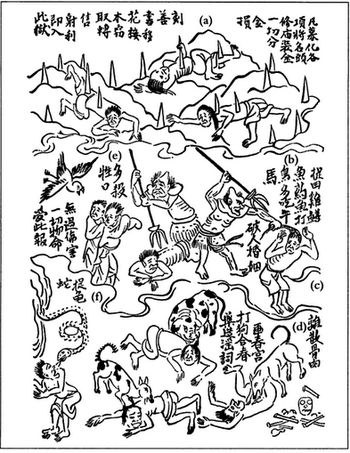 The fullest and most important of these Dunhuang texts is the "Maudgalyāyana: Transformation Text on Mahamaudgalyāyana Rescuing His Mother from the Underworld, With Pictures, One Scroll, With Preface." [8] In this text, Mulian's original name is "Radish," or "Turnip," a typical Chinese nickname, and his mother is Liu Qingti.[6]

Before Radish became a Buddhist, he went abroad on business and gave his mother money for feeding monks and beggars. She stingily hides it away, and soon after Radish returns, dies and the Jade Emperor judges that she should be turned over to Yama, ruler of the underworld, and dropped to the lowest order of hell for her selfish deception. Mulian becomes a Buddhist and uses his new powers to travel to heaven. There his father informs him that his mother is suffering extremely in the Avīci Hell, the cruelest of the purgatories. Mulian descends and meets ox-headed devils who force sinners to cross the river to hell and to embrace hot copper pillars that burn away their chests. But by the time Mulian locates his mother she has been nailed down with forty-nine iron spikes. He seeks Buddha's help and is given a rod to smash prison walls and release the prisoners of hell to a higher reincarnation, but his mother is not released. Mulian's mother is reborn as a hungry ghost who can never eat her fill because her neck has been made too thin. Mulian tries to send her food by placing it on the ancestral altar, but the food bursts into flame just as it reaches her mouth. To rescue her from this torture, the Buddha instructs Mulian and all filial sons to provide a grand feast of "yülan bowls" on the fifteenth day of the seventh month, the time when monks emerge from their summer retreat.[9] When his mother is reincarnated once gain, this time as a black dog, Mulian recites sutras for seven days and seven nights, and his mother becomes a human again. In the end she can attain the joys of heaven.[10]

Filial emotion is vivid in this version. Mulian's mother calls him "my filial and obedient son," while Mulian "chokes and sobs with his tears falling like rain." As in the Yulanpen Sutra, she only can be redeemed by group action of all the monks, not any one monk. Mulian, a good Chinese son, exclaims that the most important thing is "the affection of one's parents and their kindness most profound." As one scholar puts it, by the late Tang, "the Buddhist embrace of filial piety seems to have been taken for granted..." and the way was opened for further synthesis in later dynasties.[6]

The stories sometimes use earthy characterization. When Mulian's mother is reincarnated as a black dog, Mulian seeks her out and she concedes that she is better off than she had been as a hungry ghost. As a dog, she says:

I can go or stay, sit or lie as I choose. If I am hungry I can always eat human excrement in the privy; if I am thirsty, I can always quench my thirst in the gutter. In the morning I hear my master invoking the protection of the Tree Treasures (Buddha, the Religion, and the Community); in the evening I hear his wife reciting the noble scriptures. To be a dog and have to accept the whole realm of impurities is a small price to pay for never so much as hearing the word "Hell" said in my ear.[11]

In another version, "The Mulian Legend," Mulian's mother, Liu Qingti, had been pious but after her husband died took up sacrificing animals to eat meat, resorted to violence, and cursed. When she dies, the Jade Emperor judges that she should be sent to the underworld. Yama, ruler of the underworld, dispatches demons to take her, and she lies to them and to her son, saying that she has not eaten meat or done wrong things. The demons to take her away.[12]

Later variations use Mulian's story for different purposes. In the 13th century Blood Bowl Sutra, for instance, Mulian's mother must swim in a bloody pool and drink blood to punish her for letting her menstrual blood flow into public waters which the Buddha drank it when his followers used it to make him a cup of tea.[13]

The folk opera "Mulian Rescues his Mother" has been called "the greatest of all Chinese religious operas," often performed for the Ghost Festival on the 15th day of the seventh lunar month. The performance "presented the mysteries of death and rebirth in scenes whose impact on audiences must have been overwhelming" and which taught the audience religious and moral values, though not always in orthodox form.[12]

In the Ming dynasty, Zheng Zhizhen 鄭之珍 (1518-1595), a native of the Huizhou, Anhui, village of Qingxi wrote the opera 目蓮救母行孝戲文 Mulian jiu mu xing xiao xi wen (Mulian rescues his mother).[14] According to local legend, Zheng was blind when he wrote the opera and was restored to full sight by a grateful Guanyin (the legend also has it that when Zheng later wrote a love story he went blind again). Zheng's opera places emphasis on Confucian family values.[15]

Mulian in the 20th century

On the mainland, after declining in popularity after the 1920s, the Mulian opera revived when it was listed as a National Intangible Cultural Heritage in 2006. But even supporters in the People's Republic see the future as under threat from high-tech television and films. There are several further challenges. In the past, the opera was passed on orally through family troupes which kept their skills to themselves. They no longer exist. The opera is difficult to perform. The ghost roles involve acrobatic skills which require years of training. Since the audience is small, performers require government support. Some observers point to signs for hope, however. While traditional village audiences have dwindled, some film stars and celebrities have taken up the art. Local authorities in Huangshan City, Anhui province have also promoted performances as a tourist attraction.[16]

Anthropologists report that in Taiwan the Mulian story was used in funerals at least until the late decades of the 20th century.[17] One anthropologist interprets the legend as reflecting attitudes toward women in village Taiwan. Since "because of their polluting nature, women cannot approach the deities who could help them to overcome the ties of karmic retribution caused by their sexuality," but "need men to act on their behalf...." [18]