Though not its founder, he is considered the master of the Illuminationist (or, Ishraghi or Ishraqi) school of Philosophy, a seminal figure who synthesized the many tracts of the Islamic Golden Age philosophies into what he called the Transcendent Theosophy or al-hikmah al-muta’liyah.

Mulla Sadra brought "a new philosophical insight in dealing with the nature of reality" and created "a major transition from essentialism to existentialism" in Islamic philosophy,[3] although his existentialism should not be too readily compared to Western existentialism. His was a question of existentialist cosmology as it pertained to Allah, and thus differs considerably from the individual, moral, and/or social, questions at the heart of Russian, French, German, or American Existentialism. 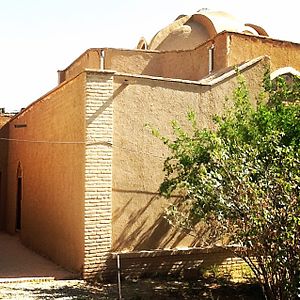 The house of Mulla Sadra in Kahak (a small village near the city of Qom, in Iran) where Mulla Sadra used to live in when he was exiled due to some of his ideas. 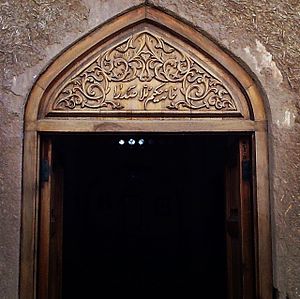 The entrance door of the house, where Mulla Sadra used to live during his exile in Kahak. There is a sentence above of the door written in Farsi which says "The house of the wise, Mulla Sadra". 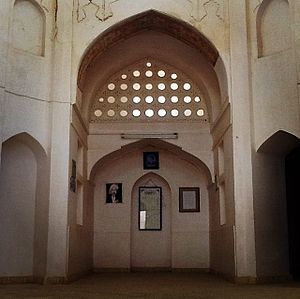 This is a view of the inside of the house of Mulla Sadra in Kahak. A copy of the painted portrait of him is hanged on the wall.

Born in Shiraz, in what is now Iran, to a notable family of court officials in 1571 or 1572,[5] in Mulla Sadra's time, the safavid dynasty governed on Iran. Safavid kings granted independence to Fars Province which was ruled by the king's brother. Mulla Sadara's father , khwajah Ibrahim Qavami, was a knowledgeable and extremely faithful politician. his father was a rich man and held a high position. but had no children. however after a lot of prayers and supplications to divine portal, God gave him a son whom they named Muhammad but called Sadra. later he was nicknamed as Mulla, that is, great scientist. he was the only child of the minister of the ruler of the vast region of Fars Province. in that time it was prevalent that aristocrats' children to be educated by private teachers in their own palace. sadra was a very intelligent, strict, energetic, studious and curious boy and mastered all the lessons related to Persian and Arabic literature as well as the art of calligraphy, during a very short Time. following to old traditions of his time, he had to learned horse riding, hunting and fighting techniques , Mathematics, astronomy, medicine to some extent, jurisprudence , Islamic law.the ypung Sadra, who had not reached the age of puberty, had acquired some of all those fields of knowledge however, he was mainly attracted on philosophy and particularly gnosis.[6]

Mulla Sadra moved first to Qazvin in 1591 and then to Isfahan 1597 to pursue a traditional and institutional education in philosophy, theology, Hadith, and hermeneutics. Each city was a successive capital of the Safavid dynasty and centers of Twelver Shi'ite seminaries at that time. His teachers included Mir Damad and Baha' ad-Din al-`Amili.[7]

Mulla Sadra was a master of all science of his Time. of course the most important of them was philosophy in sadra's resflection.in Qazvin Sadra studied under his two notable prominent teachers namely Baha' ad-Din al-`Amili and Mir Damad. when the capital transmitted from Qazvin ti Isfahan in 1006 A.H/1596, also Mulla Sadra accompanied them . Mulla sadra achieved most of his scholarly knowledge from Baha' ad-Din al-`Amili and Mir Damad.[8] Shaykh Baha was not only an expert in Islamic sciences but also a master of astronomy, theoretical mathematics, engineering, architecture, Medicine and some secret supernatural fields of knowledge; it seems that Ameli for his sophis Ideas, didn't deal with philosophy more. also Miradamad as genius of his time, although knew the all science of his time but limited his domain to jurisprudence, hadith and mainly philosophy. Mir Damad was a master of both Peripatetic and illuminationist schools of Islamic philosophy. also Mulla Sadra obtained most of his knowledge of philosophy and gnosis from Mir Damad and always introduced him as his true teacher and spiritual guide. [9]

After he had finished his studies Sadra began to explore unorthodox doctrines and as a result was both condemned and excommunicated by some Shi'i ʿulamāʾ. He then retired for a lengthy period of time to a village named Kahak near qom, where he engaged in contemplative exercises. While in Kahak, he wrote a number of minor works, including the Risāla fi 'l-ḥashr and the Risāla fī ḥudūth al-ʿālam .[10]

In 1612, Mulla Sadra was asked to abandon his retirement by the powerful governor of Fārs, Allāhwirdī Ḵhān[10] and invited back to Shiraz to teach and run a new madrasa devoted to the intellectual sciences.[5] He died in Basra after the Hajj and was buried in present-day Iraq. He is buried in the city of Najaf, Iraq.

During this time in Shīrāz, Ṣadrā began writing treatises that synthesized wide-ranging strands of existing Islamic systems of thought. The ideas of this school, which may be seen as a continuation of the School of Iṣfahān of Mīr Dāmād and Shaykh-i Bahāʾī, were promulgated after Sadrā's death by his pupils, several of whom would become sought-after thinkers in their own right, such as, Mullā Muḥsin, Fayḍ Kāshānī, and ʿAbd Razzāḳ Lāhidjī. Although Ṣadrā's influence remained limited in the generations after his death, it increased markedly during the 19th century, when his ideas helped inspire a renewed Akhbārī tendency within Twelver Shīʿism. In recent times, his works have been studied in Iran, Europe, and America.[10]

According to Mulla Sadra, "existence precedes the essence and is thus principal since something has to exist first and then have an essence." It is notable that for Mulla Sadra this was a question that specifically applied to God and God's position in the universe, especially in the context of reconciling God's position in the Qur'an verses cosmological philosophies of Islam's Golden Era.[11]

Mulla Sadra metaphysics gave priority "Ab initio" to existence, over quiddity. That is to say, essences are determined and variable according to existential "intensity", (to use Henry Corbin's definition), and as such essences are not immutable.[12] The advantage to this schema is that it is acceptable to the fundamental statements of the Qur'an, even as it does not necessarily debilitate any previous Islamic philosopher's Aristotelian or Platonic foundations.

Indeed, Mulla Sadra provides immutability only to God, while intrinsically linking essence and existence to each other, and God's power over existence. In so doing, Mulla Sadra simultaneously provided for God's authority over all things, while also solving the problem of God's knowledge of particulars, including those that are evil, without being inherently responsible for them — even as God's authority over the existence of existences that provide the framework for evil to exist. This clever solution provides for Freedom of Will, God's Supremacy, the Infiniteness of God's Knowledge, the existence of Evil, and a definition of existence and essence which leaves two inextricably linked insofar as Man is concerned, but fundamentally separate insofar as God is concerned.[13]

Perhaps most importantly, the Primacy of Existence solution provides the capacity for God's Judgement without God being directly, or indirectly, affected by the evil being judged. God does not need to possess Sin to know Sin: God is able to judge the intensity of Sin as God perceives Existence.[13]

One result of this Existentialism is "The unity of the intellect and the intelligible" (Arabic: Ittihad al-Aaqil wa l-Maqul. As Henry Corbin describes:

Another central concept of Mulla Sadra's philosophy is the theory of "substantial motion" (Arabic:al-harakat al-jawhariyyah), which is "based on the premise that everything in the order of nature, including celestial spheres, undergoes substantial change and transformation as a result of the self-flow (fayd) and penetration of being (sarayan al-wujud) which gives every concrete individual entity its share of being. In contrast to Aristotle and Avicenna who had accepted change only in four categories, i.e., quantity (kamm), quality (kayf), position (wad’) and place (‘ayn), Sadra defines change as an all-pervasive reality running through the entire cosmos including the category of substance (jawhar)."[15]

Mulla Sadra held the view that Reality is Existence. He believed that an essence was by itself a general notion, and therefore and does not, in reality, exist.[16]

Sadra argued that all contingent beings require a cause which puts their balance between existence and non-existence in favor of the former; nothing can come into existence without a cause. Since the world is therefore contingent upon this First Act, not only must God exist, but God must also be responsible for this First Act of creation.

Sadra also believed that a causal regress was impossible because the causal chain could only work in the matter that had a beginning, middle, and end:

The Causal Nexus of Mulla Sadra was a form of Existential Ontology within a Cosmological Framework that Islam supported. For Mulla Sadra the Causal "End" is as pure as its corresponding "Beginning", which instructively places God at both the beginning and the end of the creative act. God's capacity to measure the intensity of Existential Reality by measuring Causal Dynamics' and their Relationship to their Origin, as opposed to knowing their effects, provided the Islamically-acceptable framework for God's Judgement of Reality without being tainted by its Particulars. This was an ingenious solution to a question that had haunted Islamic philosophy for almost one thousand years: How is God able to judge sin without knowing sin?[13]

For Mulla Sadra a true statement is a statement that is true to the concrete facts in existence. He held a metaphysical and not a formal idea of truth, claiming that the world consists of mind-independent objects that are always true and truth is not what is rationally acceptable within a certain theory of description. In Mulla Sadra's view one cannot have access to the reality of being: only linguistic analysis is available. This theory of Truth has two levels: the claim that a proposition is true if it corresponds to things in reality; and that a proposition can be true if it conforms with the actual thing itself.[19]