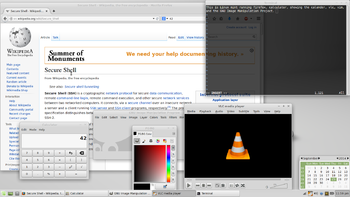 In computing, multitasking is a concept of performing multiple tasks (also known as processes) over a certain period of time by executing them concurrently. New tasks start and interrupt already started ones before they have reached completion, instead of executing the tasks sequentially so each started task needs to reach its end before a new one is started. As a result, a computer executes segments of multiple tasks in an interleaved manner, while the tasks share common processing resources such as central processing units (CPUs) and main memory.

In the case of a computer with a single CPU, only one task is said to be running at any point in time, meaning that the CPU is actively executing instructions for that task. Multitasking solves the problem by scheduling which task may be the one running at any given time, and when another waiting task gets a turn. The act of reassigning a CPU from one task to another one is called a context switch; the illusion of parallelism is achieved when context switches occur frequently enough. Operating systems may adopt one of many different scheduling strategies, which generally fall into the following categories:[citation needed]

The term "multitasking" has become an international term, as the same word is used in many other languages such as German, Italian, Dutch, Danish and Norwegian.

In the early days of computing, CPU time was expensive, and peripherals were very slow. When the computer ran a program that needed access to a peripheral, the central processing unit (CPU) would have to stop executing program instructions while the peripheral processed the data. This was deemed very inefficient.[citation needed]

The first computer using a multiprogramming system was the British Leo III owned by J. Lyons and Co. Several different programs in batch were loaded in the computer memory, and the first one began to run. When the first program reached an instruction waiting for a peripheral, the context of this program was stored away, and the second program in memory was given a chance to run. The process continued until all programs finished running.[citation needed]

The use of multiprogramming was enhanced by the arrival of virtual memory and virtual machine technology, which enabled individual programs to make use of memory and operating system resources as if other concurrently running programs were, for all practical purposes, non-existent and invisible to them.[citation needed]

Multiprogramming doesn't give any guarantee that a program will run in a timely manner. Indeed, the very first program may very well run for hours without needing access to a peripheral. As there were no users waiting at an interactive terminal, this was no problem: users handed in a deck of punched cards to an operator, and came back a few hours later for printed results. Multiprogramming greatly reduced wait times when multiple batches were being processed.[citation needed]

The expression "time sharing" usually designated computers shared by interactive users at terminals, such as IBM's TSO, and VM/CMS. The term "time-sharing" is no longer commonly used, having been replaced by "multitasking", following the advent of personal computers and workstations rather than shared interactive systems.

As a cooperatively multitasked system relies on each process regularly giving up time to other processes on the system, one poorly designed program can consume all of the CPU time for itself, either by performing extensive calculations or by busy waiting; both would cause the whole system to hang. In a server environment, this is a hazard that makes the entire environment unacceptably fragile.

Preemptive multitasking allows the computer system to guarantee more reliably each process a regular "slice" of operating time. It also allows the system to deal rapidly with important external events like incoming data, which might require the immediate attention of one or another process. Operating systems were developed to take advantage of these hardware capabilities and run multiple processes preemptively. Preemptive multitasking was supported on DEC's PDP-8 computers, and implemented in OS/360 MFT in 1967, in MULTICS (1964), and Unix (1969); it is a core feature of all Unix-like operating systems, such as Linux, Solaris and BSD with its derivatives.[2]

At any specific time, processes can be grouped into two categories: those that are waiting for input or output (called "I/O bound"), and those that are fully utilizing the CPU ("CPU bound"). In primitive systems, the software would often "poll", or "busywait" while waiting for requested input (such as disk, keyboard or network input). During this time, the system was not performing useful work. With the advent of interrupts and preemptive multitasking, I/O bound processes could be "blocked", or put on hold, pending the arrival of the necessary data, allowing other processes to utilize the CPU. As the arrival of the requested data would generate an interrupt, blocked processes could be guaranteed a timely return to execution.[citation needed]

Another reason for multitasking was in the design of real-time computing systems, where there are a number of possibly unrelated external activities needed to be controlled by a single processor system. In such systems a hierarchical interrupt system is coupled with process prioritization to ensure that key activities were given a greater share of available process time.[citation needed]

Threads were born from the idea that the most efficient way for cooperating processes to exchange data would be to share their entire memory space. Thus, threads are effectively processes that run in the same memory context and share other resources with their parent processes, such as open files. Threads are described as lightweight processes because switching between threads does not involve changing the memory context.[4][5][6]

While threads are scheduled preemptively, some operating systems provide a variant to threads, named fibers, that are scheduled cooperatively. On operating systems that do not provide fibers, an application may implement its own fibers using repeated calls to worker functions. Fibers are even more lightweight than threads, and somewhat easier to program with, although they tend to lose some or all of the benefits of threads on machines with multiple processors.[citation needed]

Essential to any multitasking system is to safely and effectively share access to system resources. Access to memory must be strictly managed to ensure that no process can inadvertently or deliberately read or write to memory locations outside of the process's address space. This is done for the purpose of general system stability and data integrity, as well as data security.

In general, memory access management is the operating system kernel's responsibility, in combination with hardware mechanisms (such as the memory management unit (MMU)) that provide supporting functionalities. If a process attempts to access a memory location outside of its memory space, the MMU denies the request and signals the kernel to take appropriate actions; this usually results in forcibly terminating the offending process. Depending on the software and kernel design and the specific error in question, the user may receive an access violation error message such as "segmentation fault".

In a well designed and correctly implemented multitasking system, a given process can never directly access memory that belongs to another process. An exception to this rule is in the case of shared memory; for example, in the System V inter-process communication mechanism the kernel allocates memory to be mutually shared by multiple processes. Such features are often used by database management software such as PostgreSQL.

Inadequate memory protection mechanisms, either due to flaws in their design or poor implementations, allow for security vulnerabilities that may be potentially exploited by malicious software.

Use of a swap file or swap partition is a way for the operating system to provide more memory than is physically available by keeping portions of the primary memory in secondary storage. While multitasking and memory swapping are two completely unrelated techniques, they are very often used together, as swapping memory allows more tasks to be loaded at the same time. Typically, a multitasking system allows another process to run when the running process hits a point where it has to wait for some portion of memory to be reloaded from secondary storage.[citation needed]

Processes that are entirely independent are not much trouble to program in a multitasking environment. Most of the complexity in multitasking systems comes from the need to share computer resources between tasks and to synchronize the operation of co-operating tasks.[citation needed]

Bigger systems were sometimes built with a central processor(s) and some number of I/O processors, a kind of asymmetric multiprocessing.[citation needed]

Over the years, multitasking systems have been refined. Modern operating systems generally include detailed mechanisms for prioritizing processes, while symmetric multiprocessing has introduced new complexities and capabilities.[citation needed]