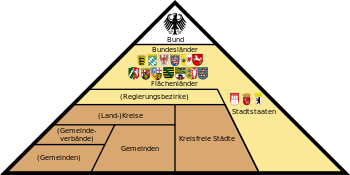 The "pyramid" of German administrative subdivisions

Municipalities (Gemeinden, more accurately translated as "communities") are the lowest level of official territorial division in Germany. This is most commonly the fourth level of territorial division, ranking after the Land (state), Kreis (district) and Samtgemeinde (collective municipality). The Gemeinde which is one level lower in those states also includes Regierungsbezirke (singular: Regierungsbezirk) as an intermediate territorial division. The Gemeinde is one level higher if it is not part of a Samtgemeinde. Only 10 municipalities in Germany have fifth level administrative subdivisions and all of them are in Bavaria. The highest degree of autonomy may be found in the Gemeinden which are not part of a Kreis. These Gemeinden are referred to as Kreisfreie Städte or Stadtkreise, sometimes translated as having "city status". This can be the case even for small municipalities. However, many smaller municipalities have lost this city status in various administrative reforms in the last 40 years when they were incorporated into a Kreis. In some states they retained a higher measure of autonomy than the other municipalities of the Kreis (e.g. Große Kreisstadt). Municipalities titled Stadt (town or city) are urban municipalities while those titled Gemeinde are classified as rural municipalities.

With more than 3,400,000 inhabitants, the most populated municipality of Germany is the city of Berlin; and the least populated is Wiedenborstel (8 inhabitants in 2010), in Schleswig-Holstein. The cities of Aachen and Saarbrücken have a special status, which is why the numbers in the respective states North Rhine-Westphalia and Saarland appear in brackets in the table.

Media related to Municipalities of Germany at Wikimedia Commons