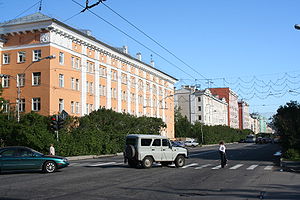 Murmansk (Russian: Му́рманск; IPA: [ˈmurmənsk]; Template:Lang-sjd; Northern Sami: Murmánska; Skolt Sami: Muurman; Finnish: Murmansk; Norwegian: Murmansk) is a port city and the administrative center of Murmansk Oblast, Russia, located in the extreme northwest part of Russia, on the Kola Bay, an inlet of the Barents Sea on the northern shore of the Kola Peninsula, close to the Russia's borders with Norway and Finland.

Despite its extreme northern location above the Arctic Circle, Murmansk tends to be nearly the same as any other Russian city of its size, featuring highway and railway access to the rest of Europe, a railway station, and the northernmost trolleybus system on Earth. 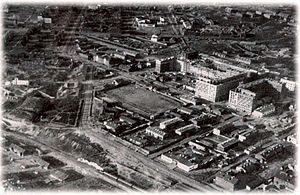 Murmansk was the last city founded in the Russian Empire.[11] In 1915, World War I needs led to the construction of the railroad from Petrozavodsk to an ice-free location on the Murman Coast in the Russian Arctic, to which Russia's allies shipped military supplies.[6] The terminus became known as the Murman station and soon boasted a port, a naval base, and an adjacent settlement with a population which quickly grew in size and soon surpassed the nearby towns of Alexandrovsk and Kola.[6]

On June 29 [O.S. July 12], 1916, Russian Transport Minister Alexander Trepov petitioned to grant urban status to the railway settlement.[6] On July 6 [O.S. July 19], 1916, the petition was approved and the town was named Romanov-on-Murman (Рома́нов-на-Му́рмане, Romanov-na-Murmane), after the royal Russian dynasty of Romanovs.[6] On September 21 [O.S. October 4], 1916, the official ceremony was performed,[6] and the date is now considered the official date of the city's foundation. After the February Revolution of 1917, on April 3 [O.S. April 16], 1917, the town was given its present name.[12] 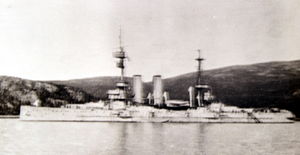 In the winter of 1917 the British North Russia Squadron under Rear Admiral Thomas Kemp was established at Murmansk.[13]

From 1918 to 1920, during the Russian Civil War, the town was occupied by the Western powers, who had been allied in World War I, and by the White Army forces.[14]

On February 13, 1926, local self-government was organized in Murmansk for the first time, during a plenary session of the Murmansk City Soviet, which elected a Presidium.[12] Prior to this, the city was governed by the authorities of Alexandrovsky Uyezd and later of Murmansk Governorate.[12] On August 1, 1927, the All-Russian Central Executive Committee (VTsIK) issued two Resolutions: "On the Establishment of Leningrad Oblast" and "On the Borders and Composition of the Okrugs of Leningrad Oblast", which transformed Murmansk Governorate into Murmansk Okrug within Leningrad Oblast and made Murmansk the administrative center of Murmansk Okrug.[12]

In 1934, the Murmansk Okrug Executive Committee developed a redistricting proposal, which included a plan to enlarge the city by merging the surrounding territories in the north, south, and west into Murmansk.[12] While this plan was not confirmed by the Leningrad Oblast Executive Committee, in 1935–1937 several rural localities of Kolsky and Polyarny Districts were merged into Murmansk anyway.[12]

During World War II, Murmansk was a link to the Western world for the Soviet Union with large quantities of goods important to the respective military efforts traded with the Allies: primarily manufactured goods and raw materials into the Soviet Union. The supplies were brought to the city in the Arctic convoys.

German forces in Finnish territory launched an offensive against the city in 1941 as part of Operation Silver Fox, and Murmansk suffered extensive destruction, the magnitude of which was rivaled only by the destruction of Leningrad and Stalingrad.[16][17] However, fierce Soviet resistance and harsh local weather conditions along with the bad terrain prevented the Germans from capturing the city and cutting off the vital Karelian railway line and the ice-free harbor.

For the rest of the war, Murmansk served as a transit point for weapons and other supplies entering the Soviet Union from other Allied nations. This unyielding, stoic resistance was commemorated at the 40th anniversary of the victory over the Germans in the formal designation of Murmansk as a Hero City on May 6, 1985.[18] During the Cold War Murmansk was a center of Soviet submarine and icebreaker activity. After the dissolution of the Soviet Union, the nearby city and naval base of Severomorsk remains the headquarters of the Russian Northern Fleet.

In 1974, a massive 35.5-meter (116 ft) tall statue Alyosha, depicting a Russian World War II soldier, was installed on a 7-meter (23 ft) high foundation. In 1984, the Hotel Arctic, now known as Azimut Hotel Murmansk, opened and became the tallest building above the Arctic Circle.

On January 1, 2015, the territory of Murmansk was expanded, when the urban-type settlement of Roslyakovo, previously in jurisdiction of the closed administrative-territorial formation of Severomorsk, was abolished and its territory merged into Murmansk.[19]

As of 2012, the city is divided into three administrative okrugs:[20]

In November 2010 direct mayoral election was abolished, and re-instituted in January 2014, with the most recent elections for mayor and city council taking place in September 2014.[21]

The port of Murmansk remains ice-free year round due to the warm North Atlantic Current and is an important fishing and shipping destination. It is home port to Atomflot, the world's only fleet of nuclear-powered icebreakers.[22]

The Port of Murmansk is the headquarters of Sevmorput (Northern Sea Route), and the administration of Russian Arctic maritime transport.

Murmansk is linked by the Kirov Railway to St. Petersburg and is also linked to the rest of Russia by the M18 Kola Motorway. Murmansk Airport provides air links to Moscow and St. Petersburg, as well as an international connection to Tromsø, Norway. 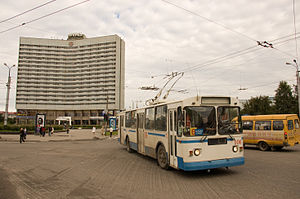 Trolley Ziu-682 with Azimut Hotel Murmansk in the background

Murmansk is set to be the Russian terminus of the Arctic Bridge (or Arctic Sea Bridge), a sea route linking it to the Canadian port of Churchill, Manitoba. The passage has not been fully tested for commercial shipping yet, but Russia has shown interest in it. It is believed that, once developed (along with the Northwest Passage), the bridge will serve as a major trade route between Europe and Asia.[23]

Murmansk features a subarctic climate, with long and cold winters and short but relatively mild summers. In the city, freezing temperatures are routinely experienced from October to May. Average temperatures exceed 0 degrees Celsius only from May through October. The average low during the coldest part of the year in Murmansk is approximately −14 °C (7 °F). However temperatures routinely plunge below −20 °C (−4 °F) during the winter. Murmansk's brief summer is mild, with average highs in July exceeding +17 °C (63 °F). The city is slightly wetter during the summer than the winter, seeing an average of just under 500 mm (20 in) of precipitation each year. The "midnight sun" is above the horizon from 22 May to 23 July, and the period with continuous daylight lasts a bit longer, polar night from 2 December to 10 January. 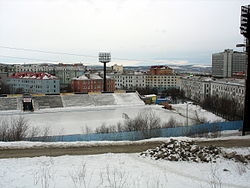 The city's association football team, FC Sever Murmansk, played in the Russian Second Division until 2014 when it folded due to financial difficulties.

Bandy club Murman[26] has played in the highest division of the Russian Bandy Super League, last in 2011–2012. Their home arena Stadium Stroitel has an audience capacity of 5 000.[27] The city is one of only three places with representation in the female league, through the team Arktika.[28]

To commemorate the 85th anniversary of the city's foundation, the snow-white church of the Savior-on-the-Waters was modeled after the White Monuments of Vladimir and Suzdal and built on the shore for the sailors of Murmansk (see photograph).

Murmansk is twinned or has sister city relationships with: