Murmansk Oblast (Russian: Му́рманская о́бласть, tr. Murmanskaya oblast; IPA: [ˈmurmənskəjə ˈobləsʲtʲ]) is a federal subject of Russia (an oblast), located in the northwestern part of Russia. Its administrative center is the city of Murmansk. As of the 2010 Census, its population was 795,409.[10]

Geographically, Murmansk Oblast is located mainly on the Kola Peninsula almost completely north of the Arctic Circle[15] and is a part of the larger Lapland region that spans over four countries.[16] The oblast borders with the Republic of Karelia in Russia in the south, Lapland Region[citation needed] in Finland in the west, Finnmark County[citation needed] in Norway in the northwest, and is washed by the Barents Sea in the north and the White Sea in the south and east.[15] Arkhangelsk Oblast of Russia lies across the White Sea.[15]

Much of the oblast's relief is hilly, with the Khibiny and Lovozero ranges rising as high as 1,200 meters (3,900 ft) above sea level and stretching from west to east.[15] The north of the oblast is mostly covered by tundra; forest tundra prevails further south, while the southern regions are in the taiga zone.[15] There are over 100,000 lakes and 18,000 rivers in the oblast.[15]

The climate is harsh and unstable, due to the proximity of the Gulf Stream on one side and Arctic cold fronts on the other.[15] Sharp temperature changes, high winds, and abundant precipitation are common throughout the year, with the heating season lasting for ten straight months.[15] However, the waters of the Murman Coast in the south remain warm enough to remain ice-free even in winter.[17]

The Saami, now a very small minority, are the indigenous people of the region. However, Russians started to explore the shores of the White Sea as early as the 12th century. Despite these early settlements, the area remained undeveloped for centuries, with the city of Murmansk being founded only in 1916.

The oblast was established on May 28, 1938 from Murmansk Okrug of Leningrad Oblast (comprising the city of Murmansk, Kirovsky, Kolsky, Lovozersky, Polyarny, Saamsky, Teribersky, and Tersky Districts) and Kandalakshsky District of the Karelian ASSR.[3]

The area of Pechengsky District (Petsamo in Finnish), which was ceded to Finland by the 1920 Treaty of Tartu, giving this country access to the Barents Sea, was recaptured by the Soviet Union in 1940. After the Paris Peace Treaties of 1947, the local Saami population was given the choice either of staying in Soviet Russia or resettling in Finland.[citation needed] Most of them chose the second option.[citation needed] 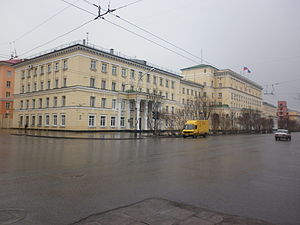 During the Soviet period, the high authority in the oblast was shared between three persons: The first secretary of the Murmansk CPSU Committee (who in reality had the biggest authority), the chairman of the oblast Soviet (legislative power), and the Chairman of the oblast Executive Committee (executive power). Since 1991, CPSU lost all the power, and the head of the Oblast administration, and eventually the governor was appointed/elected alongside elected regional parliament.

The Charter of Murmansk Oblast is the fundamental law of the region. The Legislative Assembly of Murmansk Oblast is the province's standing legislative (representative) body. The Legislative Assembly exercises its authority by passing laws, resolutions, and other legal acts and by supervising the implementation and observance of the laws and other legal acts passed by it. The highest executive body is the Oblast Government, which includes territorial executive bodies such as district administrations, committees, and commissions that facilitate development and run the day to day matters of the province. The Oblast administration supports the activities of the Governor who is the highest official and acts as guarantor of the observance of the oblast Charter in accordance with the Constitution of Russia.

Chairmen of the Murmansk Oblast Duma 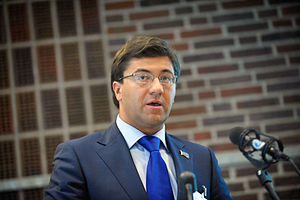 The indigenous people of the area, the Saami, are only a tiny minority today. As of the 2002 Census, 92.2% of the oblast's population live in urban areas.[21] The most populous city is the Oblast's administrative center, Murmansk, with 336,137 inhabitants.[21] Other large cities and towns include Severomorsk, Apatity, Kandalaksha, Monchegorsk, and Kirovsk. 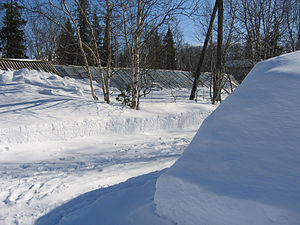 According to the 2010 Census, the ethnic composition of the oblast was as follows:[10]

According to a 2012 official survey[26] 41.7% of the population of Murmansk Oblast adheres to the Russian Orthodox Church, 3% are unaffiliated generic Christians, 1% are Orthodox Christian believers who do not belong to any church or are members of other (non-Russian) Orthodox churches, 1% are adherents of Islam, 0.4% are adherents of Rodnovery (Slavic native faith) and other indigenous folk religions, and 1% are members of the Catholic Church. In addition, 28% of the population declares to be "spiritual but not religious", 12% is atheist, and 12.5% follows other religions or did not give an answer to the question.[26]

The Murmansk Oblast is very rich in natural resources and has deposits of over 700 minerals.[28] The main industries of the region are in the sphere of raw material extraction and basic processing.[29] The largest industries are metallurgy (36,6%), electric power-production (22,9%) and food-industry, including fishing (13,7%).[30][31] The icefree port of Murmansk plays an important role in marine transportation in Russia, and the oblast has a 41% share of the total Russian marine transport market.[32][33] The fishing industry is among the most profitable in the region, supplying 16% of Russia's total fish production. Murmansk is a key base for three fishing fleets, including Russia's largest, the Murmansk Trawl Fleet.[29] 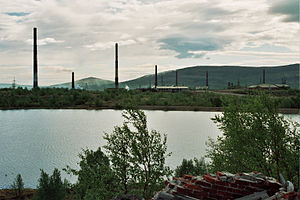 Large oil and gas resources have been discovered on the shelf of the Barents sea, including the massive Shtokman field - one of the world's largest gas fields with estimated reserves of 3.8 trillion cubic meters.[28][33][34] Prospective oil fields could potentially yield up to 40 million tons in the next 10–15 years.[28] However, the development of the oil and gas resources will require considerable investment.[28]

The Murmansk Oblast plays an important role for the Russian Navy, the Northern Fleet having its headquarters in Severomorsk, 25 km north of Murmansk. The Navy has several other bases and shipyards in the Murmansk Oblast. 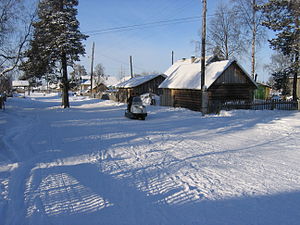