Pattern of intervals in the C-major scale

Often, especially in the context of the common practice period, most or all of the melody and harmony of a musical work is built using the notes of a single scale, which can be conveniently represented on a staff with a standard key signature.[1]

Due to the principle of octave equivalence, scales are generally considered to span a single octave, with higher or lower octaves simply repeating the pattern. A musical scale represents a division of the octave space into a certain number of scale steps, a scale step being the recognizable distance (or interval) between two successive notes of the scale. [2] However, there is no need for scale steps to be equal within any scale and, particularly as demonstrated by microtonal music, there is no limit to how many notes can be injected within any given musical interval.

A measure of the width of each scale step provides a method to classify scales. For instance, in a chromatic scale each scale step represents a semitone interval, while a major scale is defined by the interval pattern T–T–S–T–T–T–S, where T stands for whole tone (an interval spanning two semitones), and S stands for semitone. Based on their interval patterns, scales are put into categories including diatonic, chromatic, major, minor, and others. 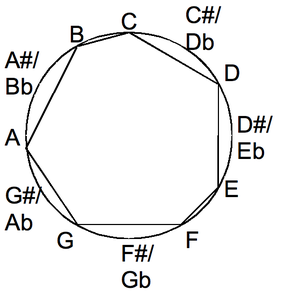 Diatonic scale in the chromatic circle

Scales are typically listed from low to high. Most scales are octave-repeating, meaning their pattern of notes is the same in every octave (the Bohlen–Pierce scale is one exception). An octave-repeating scale can be represented as a circular arrangement of pitch classes, ordered by increasing (or decreasing) pitch class. For instance, the increasing C major scale is C–D–E–F–G–A–B–[C], with the bracket indicating that the last note is an octave higher than the first note, and the decreasing C major scale is C–B–A–G–F–E–D–[C], with the bracket indicating an octave lower than the first note in the scale.

The distance between two successive notes in a scale is called a scale step.

The notes of a scale are numbered by their steps from the root of the scale. For example, in a C major scale the first note is C, the second D, the third E and so on. Two notes can also be numbered in relation to each other: C and E create an interval of a third (in this case a major third); D and F also create a third (in this case a minor third).

Scales may be described according to the intervals they contain:

or by the number of different pitch classes they contain:

"The number of the notes that make up a scale as well as the quality of the intervals between successive notes of the scale help to give the music of a culture area its peculiar sound quality."[3] "The pitch distances or intervals among the notes of a scale tell us more about the sound of the music than does the mere number of tones."[4]

The notes of a scale form intervals with each of the other notes of the chord in combination. A 5-note scale has 10 of these harmonic intervals, a 6-note scale has 15, a 7-note scale has 21, an 8-note scale has 28.[5] Though the scale is not a chord, and might never be heard more than one note at a time, still the absence, presence, and placement of certain key intervals plays a large part in the sound of the scale, the natural movement of melody within the scale, and the selection of chords taken naturally from the scale.[6] 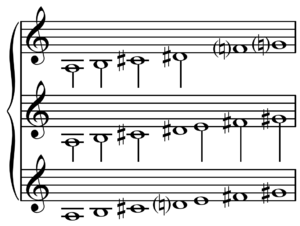 Play (help·info), middle, functions as an intermediary between the whole tone scale

Scales can be abstracted from performance or composition. They are also often used precompositionally to guide or limit a composition. Explicit instruction in scales has been part of compositional training for many centuries. One or more scales may be used in a composition, such as in Claude Debussy's L'Isle Joyeuse.[7] To the right, the first scale is a whole tone scale, while the second and third scales are diatonic scales. All three are used in the opening pages of Debussy's piece.

Scales in traditional Western music generally consist of seven notes and repeat at the octave. Notes in the commonly used scales (see just below) are separated by whole and half step intervals of tones and semitones. The harmonic minor scale includes a three-semitone step; the anhemitonic pentatonic includes two of those and no semitones.

Western music in the Medieval and Renaissance periods (1100–1600) tends to use the white-note diatonic scale C–D–E–F–G–A–B. Accidentals are rare, and somewhat unsystematically used, often to avoid the tritone.

These scales are used in all of their transpositions. The music of this period introduces modulation, which involves systematic changes from one scale to another. Modulation occurs in relatively conventionalized ways. For example, major-mode pieces typically begin in a "tonic" diatonic scale and modulate to the "dominant" scale a fifth above.

In the 19th century (to a certain extent), but more in the 20th century, additional types of scales were explored:

A large variety of other scales exists, some of the more common being:

Scales such as the pentatonic scale may be considered gapped relative to the diatonic scale. An auxiliary scale is a scale other than the primary or original scale. See: modulation (music) and Auxiliary diminished scale.

Naming the notes of a scale

In many musical circumstances, a specific note of the scale will be chosen as the tonic—the central and most stable note of the scale, also known as the root note. Relative to a choice of tonic, the notes of a scale are often labeled with numbers recording how many scale steps above the tonic they are. For example, the notes of the C major scale (C, D, E, F, G, A, B) can be labeled {1, 2, 3, 4, 5, 6, 7}, reflecting the choice of C as tonic. The expression scale degree refers to these numerical labels. Such labeling requires the choice of a "first" note; hence scale-degree labels are not intrinsic to the scale itself, but rather to its modes. For example, if we choose A as tonic, then we can label the notes of the C major scale using A = 1, B = 2, C = 3, and so on. When we do so, we create a new scale called the A minor scale. See the musical note article for how the notes are customarily named in different countries.

The scale degrees of a heptatonic (7-note) scale can also be named using the terms tonic, supertonic, mediant, subdominant, dominant, submediant, subtonic. If the subtonic is a semitone away from the tonic, then it is usually called the leading-tone (or leading-note); otherwise the leading-tone refers to the raised subtonic. Also commonly used is the (movable do) solfège naming convention in which each scale degree is denoted by a syllable. In the major scale, the solfege syllables are: Do, Re, Mi, Fa, So (or Sol), La, Ti (or Si), Do (or Ut).

In naming the notes of a scale, it is customary that each scale degree be assigned its own letter name: for example, the A major scale is written A–B–C♯–D–E–F♯–G♯ rather than A–B–D♭–D–E–E

–G♯. However, it is impossible to do this with scales containing more than seven notes.

Composers often transform musical patterns by moving every note in the pattern by a constant number of scale steps: thus, in the C major scale, the pattern C–D–E might be shifted up, or transposed, a single scale step to become D–E–F. This process is called "scalar transposition" and can often be found in musical sequences. Since the steps of a scale can have various sizes, this process introduces subtle melodic and harmonic variation into the music. This variation is what gives scalar music much of its complexity.

Through the introduction of blue notes, jazz and blues employ scale intervals smaller than a semitone. The blue note is an interval that is technically neither major nor minor but "in the middle", giving it a characteristic flavour. For instance, in the key of E, the blue note would be either a note between G and G♯ or a note moving between both. In blues a pentatonic scale is often used. In jazz many different modes and scales are used, often within the same piece of music. Chromatic scales are common, especially in modern jazz.

In Western music, scale notes are often separated by equally tempered tones or semitones, creating 12 notes per octave. Many other musical traditions use scales that include other intervals or a different number of pitches. These scales originate within the derivation of the harmonic series. Musical intervals are complementary values of the harmonic overtones series.[9] Many musical scales in the world are based on this system, except most of the musical scales from Indonesia and the Indochina Peninsulae, which are based on inharmonic resonance of the dominant metalophone and xylophone instruments. A common scale in Eastern music is the pentatonic scale, consisting of five notes. In the Middle Eastern Hejaz scale, there are some intervals of three semitones. Gamelan music uses a small variety of scales including Pélog and Sléndro, none including equally tempered nor harmonic intervals. Indian classical music uses a moveable seven-note scale. Indian Rāgas often use intervals smaller than a semitone.[10] Arabic music maqamat may use quarter tone intervals.[11][page needed] In both rāgas and maqamat, the distance between a note and an inflection (e.g., śruti) of that same note may be less than a semitone.

The term microtonal music usually refers to music with roots in traditional Western music that uses non-standard scales or scale intervals. Mexican composer Julián Carrillo created in the late 19th century microtonal scales which he called "Sonido 13", The composer Harry Partch made custom musical instruments to play compositions that employed a 43-note scale system, and the American jazz vibraphonist Emil Richards experimented with such scales in his Microtonal Blues Band in the 1970s. Easley Blackwood has written compositions in all equal-tempered scales from 13 to 24 notes. Erv Wilson introduced concepts such as Combination Product Sets (Hexany), Moments of Symmetry and golden horagrams, used by many modern composers.[weasel words] Microtonal scales are also used in traditional Indian Raga music, which has a variety of modes which are used not only as modes or scales but also as defining elements of the song, or raga.