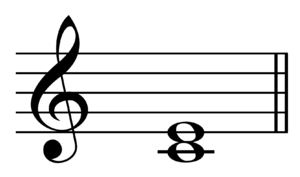 In music, there are two common meanings for tuning:

Tuning is the process of adjusting the pitch of one or many tones from musical instruments to establish typical intervals between these tones. Tuning is usually based on a fixed reference, such as A = 440 Hz. Out of tune refers to a pitch/tone that is either too high (sharp) or too low (flat) in relation to a given reference pitch. While an instrument might be in tune relative to its own range of notes, it may not be considered 'in tune' if it does not match A = 440 Hz (or whatever reference pitch one might be using). Some instruments become 'out of tune' with damage or time and must be readjusted or repaired.

The sounds of some instruments[vague] such as cymbals are inharmonic—they have irregular overtones not conforming to the harmonic series.

Tuning may be done aurally by sounding two pitches and adjusting one of them to match or relate to the other. A tuning fork or electronic tuning device may be used as a reference pitch, though in ensemble rehearsals often a piano is used (as its pitch cannot be adjusted for each rehearsal). Symphony orchestras and concert bands tend to tune to an A or a B♭, respectively, provided by the principal oboist or clarinetist.[citation needed]

Interference beats are used to objectively measure the accuracy of tuning.[citation needed] As the two pitches approach a harmonic relationship, the frequency of beating decreases. When tuning a unison or octave it is desired to reduce the beating frequency until it cannot be detected. For other intervals, this is dependent on the tuning system being used.

Harmonics may be used to facilitate tuning of strings that are not themselves tuned to the unison.[citation needed] For example, lightly touching the highest string of a cello at the middle (at a node) while bowing produces the same pitch as doing the same a third of the way down its second-highest string. The resulting unison is more easily and quickly judged than the quality of the perfect fifth between the fundamentals of the two strings.

The pitches of open strings on a violin.

In music, the term open string refers to the fundamental note of the unstopped, full string.

The strings of a guitar are normally tuned to fourths (excepting the G and B strings in standard tuning, which are tuned to a third), as are the strings of the bass guitar and double bass. Violin, viola, and cello strings are tuned to fifths. However, non-standard tunings (called scordatura) exist to change the sound of the instrument or create other playing options.

To tune an instrument, often only one reference pitch is given. This reference is used to tune one string, to which the other strings are tuned in the desired intervals. On a guitar, often the lowest string is tuned to an E. From this, each successive string can be tuned by fingering the fifth fret of an already tuned string and comparing it with the next higher string played open. This works with the exception of the G string, which must be stopped at the fourth fret to sound B against the open B string above. Alternatively, each string can be tuned to its own reference tone.

Note that while the guitar and other modern stringed instruments with fixed frets are tuned in equal temperament, string instruments without frets, such as those of the violin family, are not. The violin, viola, and cello are tuned to beatless just perfect fifths and ensembles such as string quartets and orchestras tend to play in fifths based Pythagorean tuning or to compensate and play in equal temperament, such as when playing with other instruments such as the piano. For example, the cello, which is tuned down from A220, has three more strings (four total) and the just perfect fifth is about two cents off from the equal tempered perfect fifth, making its lowest string, C-, about six cents more flat than the equal tempered C.

This table lists open strings on some common string instruments and their standard tunings.

Violin scordatura was employed in the 17th and 18th centuries by Italian and German composers, namely, Biagio Marini, Antonio Vivaldi, Heinrich Ignaz Franz Biber (who in the Rosary Sonatas prescribes a great variety of scordaturas, including crossing the middle strings), Johann Pachelbel and Johann Sebastian Bach, whose Fifth Suite For Unaccompanied Cello calls for the lowering of the A string to G. In Mozart's Sinfonia Concertante in E-flat major (K. 364), all the strings of the solo viola are raised one half-step, ostensibly to give the instrument a brighter tone so the solo violin does not overshadow it.

Scordatura for the violin was also used in the 19th and 20th centuries in works by Niccolò Paganini, Robert Schumann, Camille Saint-Saëns and Béla Bartók. In Saint-Saëns' "Danse Macabre", the high string of the violin is lower half a tone to the E♭ so as to have the most accented note of the main theme sound on an open string. In Bartók's Contrasts, the violin is tuned G♯-D-A-E♭ to facilitate the playing of tritones on open strings.

American folk violinists of the Appalachians and Ozarks often employ alternate tunings for dance songs and ballads. The most commonly used tuning is A-E-A-E. Likewise banjo players in this tradition use many tunings to play melody in different keys. A common alternative banjo tuning for playing in D is A-D-A-D-E. Many Folk guitar players also used different tunings from standard, such as D-A-D-G-A-D, which is very popular for Irish music.

A musical instrument that has had its pitch deliberately lowered during tuning is said to be down-tuned or tuned down. Common examples include the electric guitar and electric bass in contemporary heavy metal music, whereby one or more strings are often tuned lower than concert pitch. This is not to be confused with electronically changing the fundamental frequency, which is referred to as pitch shifting.

A tuning system is the system used to define which tones, or pitches, to use when playing music. In other words, it is the choice of number and spacing of frequency values used.

Due to the psychoacoustic interaction of tones and timbres, various tone combinations sound more or less "natural" in combination with various timbres. For example, using harmonic timbres:

More complex musical effects can be created through other relationships.[1]

The creation of a tuning system is complicated because musicians want to make music with more than just a few differing tones. As the number of tones is increased, conflicts arise in how each tone combines with every other. Finding a successful combination of tunings has been the cause of debate, and has led to the creation of many different tuning systems across the world. Each tuning system has its own characteristics, strengths and weaknesses.

There are many techniques for theoretical comparison of tunings, usually utilizing mathematical tools such as those of linear algebra, topology and group theory.

Systems for the twelve-note chromatic scale

Comparison of tunings: I IV

It is impossible to tune the twelve-note chromatic scale so that all intervals are pure. For instance, three pure major thirds stack up to 125/64, which at 1158.94 cents is nearly a quarter tone away from the octave. So there is no way to have both the octave and the major third in just intonation for all the intervals in the same twelve-tone system. Similar issues arise with the fifth 3/2, and the minor third 6/5 or any other choice of harmonic-series based pure intervals.

Many different compromise methods are used to deal with this, each with its own characteristics, and advantages and disadvantages.

The main ones are:

In just intonation, the frequencies of the scale notes are related to one another by simple numeric ratios, a common example of this being 1:1, 9:8, 5:4, 4:3, 3:2, 5:3, 15:8, 2:1 to define the ratios for the seven notes in a C major scale. In this example, though many intervals are pure, the interval from D to A (5:3 to 9:8) is 40/27 instead of the expected 3/2. The same issue occurs with most just intonation tunings. This can be dealt with to some extent using alternative pitches for the notes. Even that, however, is only a partial solution, as an example makes clear: If one plays the sequence C G D A E C in just intonation, using the intervals 3/2, 3/4 and 5/4, then the second C in the sequence is higher than the first by a syntonic comma of 81/80. This is the infamous "comma pump". Each time around the comma pump, the pitch continues to spiral upwards. This shows that it is impossible to keep to any small fixed system of pitches if one wants to stack musical intervals this way. So, even with adaptive tuning, the musical context may sometimes require playing musical intervals that are not pure. Instrumentalists with the ability to vary the pitch of their instrument may micro-adjust some of the intervals naturally; there are also systems for adaptive tuning in software (microtuners). Harmonic fragment scales form a rare exception to this issue. In tunings such as 1:1 9:8 5:4 3:2 7:4 2:1, all the pitches are chosen from the harmonic series (divided by powers of 2 to reduce them to the same octave), so all the intervals are related to each other by simple numeric ratios.

A system of tuning that averages out pairs of ratios used for the same interval (such as 9:8 and 10:9). The best known form of this temperament is quarter-comma meantone, which tunes major thirds justly in the ratio of 5:4 and divides them into two whole tones of equal size – this is achieved by flattening the fifths of the Pythagorean system slightly (by a quarter of a syntonic comma). However, the fifth may be flattened to a greater or lesser degree than this and the tuning system retains the essential qualities of meantone temperament. Historical examples include 1/3-comma and 2/7-comma meantone.

Any one of a number of systems where the ratios between intervals are unequal, but approximate to ratios used in just intonation. Unlike meantone temperament, the amount of divergence from just ratios varies according to the exact notes being tuned, so that C-E is probably tuned closer to a 5:4 ratio than, say, D♭-F. Because of this, well temperaments have no wolf intervals.

A timbre's partials (also known as harmonics or overtones) can be tempered such that each of the timbre's partials aligns with a note of a given tempered tuning. This alignment of tuning and timbre is a key component in the perception of consonance,[5] of which one notable example is the alignment between the partials of a harmonic timbre and a just intonation tuning. Hence, using tempered timbres, one can achieve a degree of consonance, in any tempered tuning, that is comparable to the consonance achieved by the combination of just intonation tuning and harmonic timbres. Tempering timbres in real time, to match a tuning that can change smoothly in real time, using the tuning-invariant fingering of an isomorphic keyboard, is a central component of dynamic tonality.[4]

Tuning systems that are not produced with exclusively just intervals are usually referred to as temperaments.