Muskogee County is a county located in the U.S. state of Oklahoma. As of the 2010 census, the population was 70,990.[1] The county seat is Muskogee.[2] The county and city were named for the Muscogee (Creek) Nation.[3] The official spelling of the name was changed to Muskogee by the post office in 1900.

According to archaeological studies, prehistoric people lived in this area as long ago as the Paleo-Indian period (before 6,000 B. C.). However, archaeologists have made more extensive studies of those people known as the Mound Builders who lived here during the Caddoan Stage (A.D. 300 – 1200).[3]

One of the first Europeans to come to this area was Jean Baptiste Bénard de la Harpe. He was a French explorer and trader who discovered a Wichita village in 1719. By the end of the 18th century the Wichita had been driven away by the more warlike Osage, who used this as their hunting ground. Auguste Pierre Chouteau and other fur traders had established a settlement at the Three Forks. Early in the 19th Century, Cherokee and Choctaw hunting parties made incursions that caused frequent conflict with the Osage. In 1824, the U.S. Army established Fort Gibson on the Grand River to dampen the conflict. The town of Fort Gibson that grew up just outside the fort claims to be the oldest town in Oklahoma.[3]

At the start of the U. S. Civil War, Confederate troops of the Cherokee and Creek Home Guards built Fort Davis, across the Arkansas River from Fort Gibson. Federal troops attacked and destroyed Fort Davis in 1862, driving the Confederates from this area, although a few skirmishes occurred later in the war at Bayou Menard Skirmish (1862), several at Webbers Falls (1862), and the Creek Agency Skirmish (1863).[3]

The county was formed at statehood with land from the Muskogee District of the Creek Nation and the Canadian and Illinois Districts of the Cherokee Nation.[3] A post office named Muscogee had been established January 17, 1872. The official spelling of the name was changed to Muskogee on July 19, 1900.[4]

After the Civil War, the Five Civilized Tribes, which included the Creeks, agreed to new treaties with the federal government. Among other provisions, they ceded their western lands back to the government and allowed rights of way to railroads. The Missouri, Kansas and Texas Railway (also called MKT or Katy) built a line into Indian Territory, near the Three Forks. Although railroad officials intended to build a depot at the site of Fort Davis, the terrain proved unsuitable, so they relocated the depot, which they named Muscogee, farther south. They also began the town of Oktaha 11 miles (18 km) farther south, in the same year.[3]

In 1874, the federal government consolidated all of the Five Civilized Tribes agencies into one Union Agency, located just west of Muscogee. In 1889, a federal district court was created in Muscogee. In 1894, the Dawes Commission also established its headquarters there.[3] 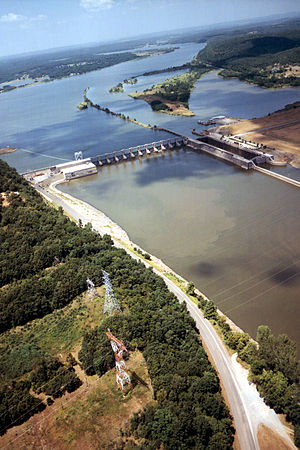 The Arkansas River in Muskogee County. The Webbers Falls Lock and Dam on the river are part of the navigation system on the river, maintained by the U.S. Army Corps of Engineers.

The county seat of the County is Muskogee, Oklahoma. All elected officials and county services are headquartered there.

At statehood, the economy was based primarily on agriculture and ranching. The main crops in the county were corn, cotton, and wheat. Agricultural service industries consisted mainly of cotton gins, grain mills, and stockyards. Cotton production declined dramatically during the Great Depression and was replaced by soybeans, wheat, feed grains, and grasses. Truck farming became important during and after World War II, leading to the development of a canning and food-processing industry.[3]

Other economic activities included oil, gas, and coal production, but these activities never reached the levels achieved in other regions. Sand and gravel pits, along with brick and glass manufacturing, developed and remained important employment sources. O. W. Coburn built an optical business that became one of the largest in the nation and employed hundreds of workers. Other industrialists included the Buddrus family, who began Acme Engineering, and the Rooney family who founded Manhattan Construction. State and federal employment has long been important, primarily in education and veterans' services. Light manufacturing and health care as well as social services provide jobs for residents. The town of Taft has two state correctional facilities, Dr. Eddie Warrior Correctional Center for women and Jess Dunn Correctional Center for men.[3]

Steamboats had plied the Arkansas River throughout much of the nineteenth and early twentieth century. The McClellan-Kerr Arkansas River Navigation System, dedicated in 1971, openingthe Arkansas and Verdigris rivers to year-round commercial traffic and leading to the development of the Port of Muskogee.[3]

Education was a high priority after the Civil War, with schools started by churches, private individuals, and the Cherokee and Creek nations. Higher educational opportunities were offered ater 1880 when Bacone College, Oklahoma's oldest, began as Indian University in Tahlequah, but was moved to the Creek Nation in present Muskogee County in 1885. Evangel Mission, a school at Union Agency for Creek freedmen, operated in the 1880s and now houses the Five Civilized Tribes Museum in Muskogee. A facility for educating visually impaired people opened at Fort Gibson in 1898. Later moved to Muskogee, it became the Oklahoma School for the Blind. Minerva Home, a school for girls in Muskogee, became Henry Kendall College in 1894, which moved to Tulsa and became the University of Tulsa in 1920. Northeastern State University opened a branch campus in Muskogee in 1994.[3]

The following sites in Muskogee County are listed on the National Register of Historic Places: