Muslim Mahammad oglu Magomayev[1] (Azerbaijani: Müslüm Məhəmməd oğlu Maqomayev, August 17, 1942 – October 25, 2008), dubbed the "King of Songs" [2] and the "Soviet Sinatra" [3] was a Soviet and Azerbaijani baritone operatic and pop singer of the 1960s and 1970s.[4] He achieved iconic status in Russia and the post-Soviet countries, including his native Azerbaijan, for his vocal talent and charisma.[5]

Muslim Magomayev represented one of the most respected artistic dynasties in Azerbaijan. His grandfather Muslim Magomayev (1885–1937), a friend and contemporary of the prominent Azerbaijani composer Uzeyir Hajibeyov, was one of the founders of modern Azerbaijani classical music. Magomayev's father, Mahammad Magomayev, who died two days prior to the defeat of Nazi Germany in World War II while serving as a soldier in the Soviet Army, was a gifted scenic designer; and his mother, Aishet Kinzhalova, was an actress.[6] Magomayev's father was of mixed origin whose parents moved to Azerbaijan from Chechnya and Georgia respectively, whereas his Adyghean-born mother was of mixed Turkish, Adyghe and Russian descent.[7] However, when asked about his ethnicity, Magomayev considered himself Azerbaijani.[8]

Estranged from his mother after his father's death, Magomayev was raised by his paternal grandmother. He learned to play the piano as a child, and began to take voice lessons at the age of 14. As a teenager, he became interested in Italian songs, American jazz, and other styles of popular music. He majored in piano and composition at the Baku Conservatoire.[6]

He was 19 when he first performed at an international youth music festival in Helsinki.[6] His performance was noted by Yekaterina Furtseva, then Minister of Culture of the Soviet Union, who offered him to be a soloist at the Bolshoi Theatre. Magomayev declined the offer.[9] In 1962, at the age of 20, Magomayev first appeared in Moscow where he performed during the Days of Azerbaijani Culture.[6] He sang an aria from Gounod’s Faust, and the song "Do the Russians Want War?" in a gala concert at the Kremlin Palace of Congresses, and became a celebrity on the spot.[6] A year later, he gave his first solo concert in the Moscow Tchaikovsky Concert Hall to a full house and became a soloist of the Azerbaijan State Academic Opera and Ballet Theatre. Muslim earned fame in the USSR as an opera singer with his performance in Rossini's "Barber of Seville". He also became known for his arias from Puccini's "Tosca", Hajibeyov's "Koroghlu" and "Shah Ismayil", which was composed by his grandfather.[10]

In 1964 and 1965, Muslim was a visiting artist at La Scala in Milan, but turned down the invitation to sing in the Moscow Bolshoi Theater upon his return. Instead, the singer turned to popular music, becoming a pop idol for several generations of music lovers in the Soviet Union. Muslim Magomayev's popularity in the USSR was overwhelming. He quickly became a cult figure and gave three concerts a day filling huge arenas all across the Soviet Union, while his albums sold millions.

In 1966 and 1969, Magomayev performed in Paris Olympia with great success. The director of Olympia Bruno Coquatrix offered him a contract, and Magomayev was seriously considering an opportunity to pursue an international career, but Yekaterina Furtseva refused to grant the Ministry of Culture's permission, claiming that it needed Magomayev to perform at government concerts. In 1969 he received the MIDEM Gold Disc Award in Cannes for album sales of over 4.5 million units. In 1973, at the age of 31, Muslim was awarded the Soviet Union's highest artistic title: People's Artist of the USSR.[11]

Magomayev moved to Moscow in the early 1970s. He became the art director of the Azerbaijan State Bandstand-Symphonic Orchestra in 1975 and toured in France, Bulgaria, Finland, and Canada.

Magomayev was also known as a composer, writing several film soundtracks and songs. In addition, Magomayev acted in films and hosted television and radio broadcasts devoted to prominent musicians of the 20th century.

Magomayev was an influence on many important Soviet musical figures including Alla Pugacheva, who often spoke fondly of him.[12]

Magomayev married when he was 19, but the union did not last a year.[6] His daughter from that first marriage, Marina,[13] lives in the United States.[6] He eventually remarried, this time to the opera singer Tamara Sinyavskaya.[6]

In later life, Magomayev struggled with a serious heart condition.[6]

Last period of his life

In 1998, Magomayev officially stopped his musical career and gave only a few performances together with his wife. He died on October 25, 2008 in his flat in Moscow from a heart attack.[14][15] He was buried in the Alley of Honor in his native city of Baku, next to his grandfather, on October 29.[16][17] The funeral ceremony was attended by Azerbaijani President Ilham Aliyev, Magomayev's widow Tamara Sinyavskaya, his daughter Marina, as well as state officials and international delegations.[13] Thousands of people came to pay a final tribute to the singer.[13][18]

Magomayev was awarded several honors including People's Artist of Azerbaijan, People's Artists of the USSR (1973),[19] Order of Honour (Russian Federation), Order of the Red Banner of Labour, Order of Friendship of Peoples, Istiglal Order, and Order of "Heart of Darko." In 1997, a minor planet of the solar system, 4980 Magomaev, was named in his honor.[16] 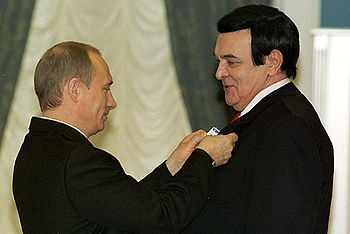