The Myanmar Air Force (Burmese: တပ်မတော် (လေ), pronounced: [taʔmədɔ̀ lè]), known until 1989 as the Burmese Air Force, is the aerial branch of Myanmar's armed forces, the Tatmadaw. The primary mission of the Myanmar Air Force since its inception has been to provide transport, logistical, and close air support to the Myanmar Army in counter-insurgency operations.[3] It is mainly used in internal conflicts in Myanmar, and, on a smaller scale, in relief missions[citation needed], especially after the deadly Cyclone Nargis of May 2008.

The Myanmar Air Force was formed as the Burmese Air Force on 16 January 1947, while Burma (as Myanmar was known until 1989) was still under British rule. By 1948, the fleet of the new air force included 40 Airspeed Oxfords, 16 de Havilland Tiger Moths, four Austers, and three Supermarine Spitfires transferred from the Royal Air Force, and had a few hundred personnel.[3]

The Mingaladon Air Base HQ, the main air base in the country, was formed on 16 June 1950. No.1 Squadron, Equipment Holding Unit and Air High Command - Burma Air Force, and the Flying Training School, were placed under the jurisdiction of the base. A few months later, on 18 December 1950, No. 2 Squadron was formed with nine Douglas Dakotas as a transport squadron. In 1953, the Advanced Flying Unit was formed under the Mingaladon Air Base with de Havilland Vampire T55s, and by the end of 1953 the Burmese Air Force had three main airbases, at Mingaladon, Hmawbi, and Meiktila, in central Burma.[3]

On 15 February 1961, an unmarked Republic of China Air Force Consolidated PB4Y Privateer came into Burmese air space carrying supplies for Chinese Kuomintang forces fighting in northern Burma, and was intercepted by three Hawker Sea Fury fighters of the Burmese Air Force. The intruding bomber and one Burmese fighter crashed in Thailand during the incident.[4]

In 1962, a new radar station in Mingaladon and a mobile radar station in Lwemwe (near Tachileik) were put into operation. By December 1964, the the Burmese Air Force had 323 officers and 5,677 other ranks and it acquired Lockheed T-33 Shooting Star jet trainers and a new radar station, which could operate within a 120-mile (193-km) radius, was opened in Namsang. In 1966, the radar arm of the air force underwent a complete overhaul and upgrade, with new radar stations being operated. The Namsang Radar station was upgraded to cover about a 200-mile (322-km) radius and renamed No.71 Squadron. In the same year, the Burmese Air Force formed the No. 1 Airborne Battalion with 26 officers and 750 other ranks.[5]

In 1975, the Burmese Air Force took delivery of 18 Bell 205A and seven Bell 206B helicopters from the United States under the International Narcotic Control Program (INCP). In March 1975, it bought 20 SIAI-Marchetti SF.260 trainers from Italy.[3]

In 1989, the Burmese Air Force was renamed the Myanmar Air Force in accordance with the country changing its name from Burma to Myanmar.

By 2000, the Myanmar Air Force has received 62 F7 IIK interceptors from China.[3] Israel was contracted to refurbish and upgrade all operational F-7s and FT-7s: these were to get the Elta EL/M-2032 air-to-air radar, Rafael Python Mk. III and even Litening laser-designator pods. The same equipment was then installed on the two-seater FT-7 fighter trainers as well. In a related deal, Israel delivered to Myanmar at least one consignment of laser-guided bombs, but no deliveries of any other weapons are known. Since the Elbit contract was won in 1997, the air force has acquired at least one more squadron of F-7 and FT-7 aircraft from China, but these were not upgraded.

The Myanmar Air Force procured a range of helicopters from Russia and Poland between 1991 and 1997; it bought 20 PZL-Swidnik Mil Mi-2 and 13 PZL W-3 Sokol helicopters from Poland and 13 Mil Mi-17 from Russia. These helicopters were put into counter-insurgency operations against ethnic rebels in the Irrawaddy River delta. Four Mil Mi-2, four PZL W-3 Sokol, and two Bell 205 helicopters were grouped as an air detachment stationed in Bogalay for "Operation Monediang" in October 1991. During this operation, Mil Mi-2 helicopters were fitted with a wide range of weapons to provide ground attack and air cover for heliborne air assault operations. Four Mil Mi-2s of the air detachment made a total of 80 sorties over 17 targets with nearly 82 flying hours. Four PZL W-3 Sokol helicopters, unarmed and used for troop transport carrying 20 airborne commandos, each flew 443 missions with 197 flying hours. Bell 205 helicopters carried out search and rescue, and they flew 263 missions with over 114 flying hours.[3]

Despite these modernisation measures, the capability of the Myanmar Air Force remained questionable, due to its absence during the Battle of Border Post 9631 with Thailand and the rescue missions related to Cyclone Nargis in May 2008.

Islamabad's Capital Television reported on 18 MarchTemplate:What year? that Pakistan's Ministry of Defence had said that a contract had been signed for Pakistan to sell the JF-17 Thunder multirole fighter, also known as the FC-1 Xiaolong, which was jointly developed by Chengdu Aircraft Industry Group and Pakistan Aeronautical Complex, to Naypyidaw.[clarification needed]

Commanders in Chief and Chiefs of Air Staff since 1948

Commander-in-Chief and Chief of Air Staff in chronological order

Personnel: 23,000 all ranks (including 1 Airborne Battalion with twenty six officers and 750 other personnel of other ranks).[3]

The Air Defence Command was formed during the late 1990s but was not fully operational until late 1999. It was renamed Bureau of Air Defence in the early 2000s (decade). In early 2000, Tatmadaw established Myanmar Integrated Air Defence System (MIADS) with help from Russia, Ukraine and China.It is a tri-service bureau with units from all three branches of Myanmar Armed Forces. All Air Defence assets except Anti-Aircraft Artillery within Tatmadaw arsenal are integrated into MIADS. AAA guns are mostly unguided and deploy to use in barrage-style firing against attacking aircraft. MIADS is directly answerable to Bureau of Air Defence under Ministry of Defence.[5]

Under MIADS, the country was divided into six Air Defence Sectors, each controlled by a Sector Operations Centre (SOC) and reporting directly to the National Air Defence Operations Centre (ADOC) in Yangon. Each SOC transmitted data back to Intercept Operations Centers (IOC), which in turn controlled SAM batteries and fighter/interceptor squadrons at various Air Bases. Each IOC was optimised to direct either SAMs or fighter/interceptor aircraft against incoming enemy aircraft or missile. Each IOC was connected to observer and early warning area reporting posts (RP) via military owned underground fibre optic cable network. There were about 100 radar stations located at approximately 40 sites throughout the country. New Air Defence radars such as 1L117 radars, Galaxy Early Warning Radar and P series radars are installed in all radar stations.[7]

Each Sector Operation Centre (SOC) is commanded by a Major General and it consists of one air defence division from Myanmar Army and one fighter-interceptor wing from Myanmar Air Force. Sometimes Air Defence Frigates from Myanmar Navy also operates under the direct command of respective SOC.

Each fighter-interceptor wing commanded by a Brigadier General and is composed of three Fighter squadrons of either MiG-29 and F-7M Airguard Interceptors (ten air crafts per squadron) and their ground base support units.[7] 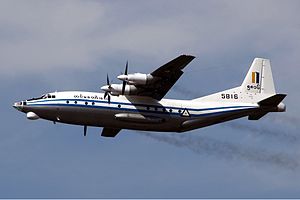 A Shaanxi Y-8 lifts off from Yangon International Airport 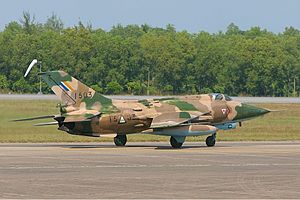 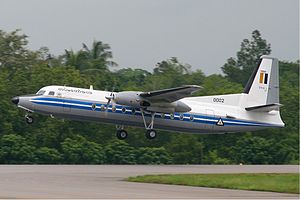 Myanmar national insignia (white triangle with yellow field in the centre and borders in blue) is usually applied on six positions. The serialling system of Myanmar Air Force aircraft is suggested to serve as both – unit and individual aircraft identity, this could not be confirmed so far, however. Most of the older aeroplanes carried the serials with the prefix “UB” and the numbers in Burmese. Sometimes the serials were outlined in white. Combat aircraft generally carry serials in black.