Mystery-Bouffe (Russian: Мистерия-Буфф; Misteriya-Buff) is a socialist dramatic play written by Vladimir Mayakovsky in 1918/1921. Mayakovsky stated in a preface to the 1921 edition that "in the future, all persons performing, presenting, reading or publishing Mystery-Bouffe should change the content, making it contemporary, immediate, up-to-the-minute."[1]

The play was written for the anniversary of the 1917 revolution, and was accepted by the Central Bureau to be part of the festivities. The title is likely a reference to the opera buffa/opéra bouffe, comic opera genres popular at the time. This original version was directed and produced by Vsevolod Meyerhold, and the art was done by Kazimir Malevich. The premiere was in the Theatre of Musical Drama on November 7, 1918.

Mayakovsky himself played the role of the "simple man", as well as some bit roles including Methuselah and one of the demons. This version of the play lasted three seasons.

After two years, Mayakovsky reworked the text of his play. This second version premiered in the First Theatre of the RSFSR on May 1, 1921. A printed edition of the second version was released in June of that year. This version of the play lasted about 100 shows.

A 60-minute animated film adaptation of the play was made in 1969, directed by David Cherkasskiy. It was the first animated feature to be made in Ukraine. The Soviet government banned screenings outside of the Ukrainian SSR.[4]

In 2007, after several decades of the play not being seen anywhere, the Moscow A.R.T.O. theatre put on an updated version of the play which was dubbed "Mystery-Bouffe. The Clean Variant", based on the texts of the first and second versions. It premiered in France on May 1, 2007.[5] 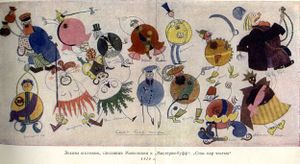 Settings of the Acts