The Naradiya Purana (Sanskrit: नारदीय पुराण, Nāradīya Purāṇa) or Narada Purana (Sanskrit: नारद पुराण, Nārada Purāṇa) is one of the major eighteen Mahapuranas, a genre of Hindu religious texts. It deals with the places of pilgrimages. It is in the style of dialogue between the sage Narada, and Sanatkumara. During the course of the dialogue between the two, Narada explains to Sanatkumara the major places of pilgrimages, their location, and significance. The Padma Purana categorizes Naradiya Purana as a Sattva Purana (Purana which represents goodness and purity).[1] 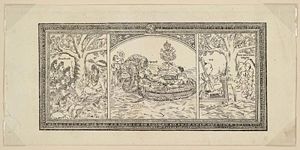 The Naradiya Purana describes the mechanics of the cosmos. Depicted here are Vishnu with his consort Lakshmi resting on Shesha Nag. Narada and Brahma are also pictured.

The printed editions of this text are divided into two parts. The first part, which incorporates the entire Brihannaradiya Purana[4] consists 125 chapters. Chapters 92–109 contain detailed information regarding the contents of the eighteen extant principal Puranas. The second part consists 82 chapters.

Narada Purana contains some of the famous stories that are well-known and that occur in other puranas also. Some of the important stories narrated by Narada are:

Markandeya is a son of Sage Mrikandu, who is born with the grace of Lord Vishnu. He become as very great devotee of Lord Vishnu and composed a purana which goes by his name as Markandeya Purana. Vishnu grants him a boon so that Markandeya lives eternally, so much so that he even survives the Pralaya (end of cosmic cycle).

This account as narrated in Narada Purana differs from the popular story (as it occurs in Linga purana) that Markandeya was a devotte of Lord Shiva and overcomes death with the grace of Lord Shiva.