Nasir Ahmed (born 1940 in Bangalore, India) is a Professor Emeritus of Electrical and Computer and Engineering at University of New Mexico (UNM). He is best known for the development of the discrete cosine transform (DCT), which is a data compression transformation. 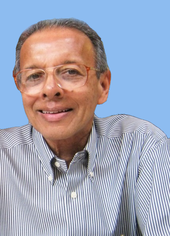 The DCT is widely used for digital image compression.[6][7][8] It is a core component of the 1992 JPEG image compression technology developed by the JPEG Experts Group[9] working group and standardized jointly by the ITU,[10] ISO and IEC. A tutorial discussion of how it is used to achieve digital video compression in various international standards defined by ITU and MPEG (Moving Picture Experts Group) is available in a paper by K. R. Rao and J. J. Hwang[11] which was published in 1996, and an overview was presented in two 2006 publications by Yao Wang.[12][13] The image and video compression properties of the DCT resulted in its being an integral component of the following widely used international standard technologies:

The form of DCT used in signal compression applications is sometimes referred to as "DCT-2" in the context of a family of discrete cosine transforms,[14] or as "DCT-II".[15]

More recent standards have used integer-based transforms that have similar properties to the DCT but are explicitly based on integer processing rather than being defined by trigonometric functions.[16] As a result of these transforms having similar symmetry properties to the DCT and being, to some degree, approximations of the DCT, they have sometimes been called "integer DCT" transforms. Such transforms are used for video compression in the following technologies pertaining to more recent standards:

The "integer DCT" design is conceptually similar to the conventional DCT; however, it is simplified and made to provide exactly specified decoding.

The DCT has been widely cited in patents that have been awarded since 1976, as evident from the following results corresponding to various search scenarios:

Have been translated into Russian, Chinese and Japanese:

It continues to be cited with respect to a broad spectrum of signal processing applications—see Google-Scholar citations [12] . Available in approximately 230 libraries. A softcover reprint of this first edition is now available—e.g., see Springer-Verlag, Amazon, Barnes and Noble and Alibris.