The NJIT Highlanders, formerly the New Jersey Tech Highlanders, are the varsity sport members of the Division I NCAA-affiliated sports teams of New Jersey Institute of Technology (NJIT). There are ten men’s teams, seven women’s teams, and three club teams along with a variety of intramural teams. The school's primary conference is the Atlantic Sun Conference.

Behind the Highlander name and logo

NJIT is located in an area known as University Heights, formerly known as the Newark Highlands. While classified under the former location, NJIT’s mailing address used to be High Street, until it was renamed in memory of Dr. Martin Luther King, Jr. This reference to NJIT’s past is what brought about the mascot The Highlander.

In keeping with its move to NCAA Division I, NJIT athletics created a new graphic identity in 2006-07. This included a new Highlanders logo developed by CN Foundry. The logo depicts a stylized Scottish Highlander warrior in traditional garb. 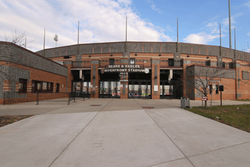 An independent in most sports until becoming a member of the Atlantic Sun Conference (A-Sun) on July 1, 2015, NJIT sponsors teams in ten men's, seven women's and one coed NCAA sanctioned sports:[1]

Move to Division I

NJIT athletics moved to the top level of college athletics, NCAA Division I, in 2006.

Prior to the entire reclassification of the athletics program, all programs competed in the Division II level. In the process of reclassification, both men’s and women’s soccer programs are taking the big leap into Division I faster than the other programs. They have a unique opportunity that allows lower division schools to elevate one sport in each gender to Division I in a process that takes two years to complete. NJIT men’s soccer became a full member of NCAA Division I at the start of the 2005 season, when the Highlanders arrived at championship eligibility. The men’s journey to the top level began in 2003. NJIT women’s soccer began a similar two-year process in 2005, with full Division I status and championship eligibility arriving with the 2007 season.

Advancing the entire program however takes four years to complete and the process includes application, a detailed strategic plan and in-depth annual review of the institution’s progress in moving toward its goal of complying with NCAA Division I rules and building a strong, broad-based athletics program.

Along the way, scholarship and operating budgets have been enhanced, with expanded coaching staffs, increased scholarship dollars and upgraded facilities for competition and practice.

Between the demise of the Great West and NJIT's July 2015 arrival in the A-Sun, the Highlanders competed as an associate member in several Division I conferences for the following sports:

The track and cross country teams for both sexes, plus the women's tennis team, will join the A-Sun along with the rest of the athletic program. The men's soccer team will remain in the Sun Belt Conference for the 2015 season until joining the A-Sun in 2016. It remains to be seen whether NJIT will continue to compete in the IC4A and ECAC.

Men's lacrosse, which was elevated from club to full varsity status for the 2015 season (2014–15 school year), competed as an independent in that season. While the A-Sun announcement made no mention of NJIT's future lacrosse affiliation, it is likely that the lacrosse team will join the Southern Conference (SoCon). The A-Sun and SoCon have a lacrosse alliance under which the two leagues divide lacrosse sponsorship, with men's in the SoCon and women's in the A-Sun. 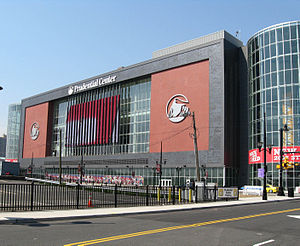 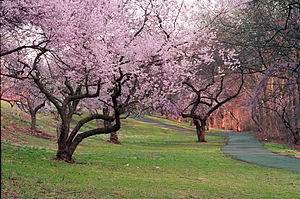 The NJIT Cross-Country Teams practice at the nearby Branch Brook Park and Van Cortlandt Park in NYC.

The Estelle and Zoom Fleisher Athletic Center, the home gymnasium for the NJIT Highlanders, underwent renovations in the summer of 2006 which included installation of a new floor and baskets, new lighting, new sound system and new scoreboards, along with entirely new seating for approximately 1,500 spectators after the first phase of renovation.

The home field for the Highlanders’ soccer program is Lubetkin Field and is a first-class venue for college soccer. Outfitted with SprinTurf artificial grass in the summer of 2004, Lubetkin Field also includes lighting for night contests, bleacher seating for more than 1,000 spectators, a press box and scoreboard. NJIT just recently hosted a Youth International Soccer Invitational on Lubetkin Field in which Mexico took the championship.

While baseball and basketball are important aspects to NJIT’s athletic program, their home matches are mainly played off campus at local sports hotspots. In a joint press conference in December 2005, former New York Yankees manager Joe Torre was a featured speaker as NJIT and the professional Newark Bears announced a 10-year partnership that secured the downtown stadium as the site of all Highlanders’ baseball home games.

NJIT basketball will also be a tenant of a major sports arena, the new downtown Prudential Center, the state-of-the-art home of the National Hockey League New Jersey Devils. The Highlanders hosted six games on four dates in 2007-08 at The Rock and NJIT plans to increase its presence in 2008-09. An expansion/extension to the existing athletic facilities has already been planned.[4]

The newly expanded conference was not eligible for automatic Division I championship postseason qualification, but the Great West Conference men's basketball tournament champion was granted an automatic bid to CollegeInsider.com Postseason Tournament (CIT).[6]

During the 2012-13 basketball season, the NCAA underwent major changes in conference realignment. The Western Athletic Conference lost all but two members, Idaho and New Mexico State, which ultimately led to the league dropping football. The WAC responded by adding seven more schools, including three of the five Great West schools: Chicago State, University of Texas-Pan America, and Utah Valley. Houston Baptist accepted an invitation to the Southland Conference. With only NJIT left, the conference folded.

Although the Northeast Conference and Atlantic Sun Conference were discussed as likely destinations as of May 2013,[7] it was not offered a spot in either for the 2013-2014 season.

However, some teams do compete in single-sport conferences. The Men's volleyball team competes in Eastern Intercollegiate Volleyball Association (EIVA). In 2013-14 the NJIT men's swimming and diving team began competing in the Coastal Collegiate Swimming Association (CCSA). In 2014 NJIT women's tennis became an associate member of the America East Conference and in 2014-15 NJIT men's soccer will begin play in the Sun Belt Conference as an associate member as well.

After two years as an independent, it was reported on June 11, 2015 that NJIT would finally be joining a conference, replacing Northern Kentucky in the Atlantic Sun Conference.[8]

NJIT, which offers a growing list of club sports, also has a robust intramural program, which makes use of the numerous athletic facilities.

Men's Soccer In 1960, NJIT was NAIA co-champions with Elizabethtown College. The game went into four overtimes. The game ended in a 2-2 draw.

NCAA Division I Men's Basketball Recognitions for futility
NJIT‘s Men’s basketball program set the record of the most winless team in D-I history (see 2007–08 NJIT Highlanders men's basketball team) in the 2007-2008 season with a losing streak of 51 games, breaking Sacramento State’s old D-I record. This acknowledgment has given NJIT’s athletic program national recognition for futility. The unofficial NCAA record was set during its second NCAA Division I transitional season. It came despite a promising debut 5-24 Division 1 transitional season (2006-2007) whereby the rookie team won its first two matches (away and home).[9] With a new head coach (Jim Engles), an entire new team of coaching staffs and additional new recruits, the NJIT Men’s basketball team ended a 51-game losing streak on January 21, 2009 with a 61-51 win over the Bryant University Bulldogs ending the 2008-2009 season with a 1-30 record. The Highlanders improved the following season (2009–2010) and ended with a 10-21 record[10] during its first official NCAA Division 1 season.

As of the end of 2009-2010 season, the NJIT Men's Basketball team records stood as follows: