The NKVD prisoner massacres were a series of mass executions carried out by the Soviet NKVD secret police during World War II against political prisoners across Eastern Europe, primarily Poland, Ukraine, the Baltic states, Bessarabia and other parts of the Soviet Union from which the Red Army was retreating following the Nazi German attack on the Soviet positions in occupied Poland, known as Operation Barbarossa.[1]

Estimates of the death toll vary between locations; nearly 9,000 in the Ukrainian SSR,[2] 20,000–30,000 in eastern Poland (now part of Western Ukraine),[1] with the total number reaching approximately 100,000 victims of extrajudicial executions in the span of a few short weeks.[3]

The launch of Operation Barbarossa surprised the NKVD, whose jails and prisons in territories annexed by the Soviet Union in the aftermath of the Molotov–Ribbentrop Pact were crowded with political prisoners. In occupied eastern Poland, the NKVD was given the responsibility of evacuating and liquidating over 140,000 prisoners (NKVD evacuation order No. 00803). In Ukraine and Western Belarus 60,000 people were forced to evacuate on foot. By official Soviet count more than 9,800 were reportedly executed in the prisons, 1,443 were executed in the process of evacuation, 59 were killed for attempting to escape, 23 were killed by German bombs, and 1,057 died from other causes.[4]

“It was not only the numbers of the executed,” historian Yuri Boshyk writes of the murders, “but also the manner in which they died that shocked the populace. When the families of the arrested rushed to the prisons after the Soviet evacuation, they were aghast to find bodies so badly mutilated that many could not be identified. It was evident that many of the prisoners had also been tortured before death; others were killed en masse.”[5]

Approximately two thirds of the total number of 150,000 prisoners[1] were murdered; most of the rest were transported into the interior of the Soviet Union, but some were abandoned inside the prisons if there was no time to execute them and others managed to escape.[6]

The NKVD and the Red Army killed prisoners in many places from Poland to Crimea.[7] Immediately after the start of the German invasion, the NKVD commenced the execution of large numbers of prisoners in most of their prisons, and the evacuation of the remainder in death marches.[8][9] Most of them were political prisoners, imprisoned and executed without a trial. The massacres were later documented by the occupying German authorities and used in anti-Soviet and anti-Jewish propaganda.[10][11][12] After the war and in recent years, the authorities of Germany, Poland, Belarus and Israel identified no fewer than 25 prisons whose prisoners were killed — and a much larger number of mass execution sites.[8]

Entrance to memorial in Piatykhatky

By 1941, a large part of the ethnically Polish population living under Soviet rule in the eastern half of Poland had already been deported to remote areas of the USSR. Others, including a large number of Polish civilians of other ethnicities (mostly Belarusians and Ukrainians), were held in provisional prisons in the towns of the region, where they awaited deportation either to NKVD prisons in Moscow or to the Gulag. It is estimated that out of 13 million people living in eastern Poland, roughly half a million were jailed, and more than 90% of them were men. Thus approximately 10% of adult males were imprisoned at the time of the German offensive.[8] Many died in prisons from torture or neglect.[8] Methods of torture included scalding victims in boiling water and cutting off ears, noses and fingers.[16] Timothy Snyder estimates that the NKVD shot some 9,817 imprisoned Polish citizens following the German invasion of the USSR in 1941.[17] 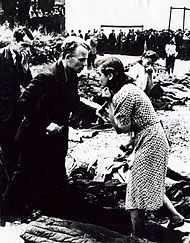 Victims on street of Lviv 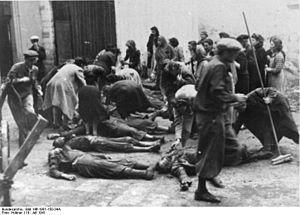 Ethnic Germans murdered at a Ternopil GPU prison, as German troops approached, are being identified by their relatives on July 10, 1941