From Infogalactic: the planetary knowledge core
Jump to: navigation, search
This name uses Eastern Slavic naming customs; the patronymic is Sergeevna and the family name is Alliluyeva. 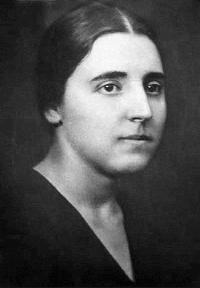 Nadezhda was the youngest child of Russian revolutionary Sergei Alliluyev, a railway worker, and his wife Olga, a woman of German and Georgian ancestry who spoke Russian with a strong accent.[citation needed]

Sergei Alliluyev, though Russian, had found work and a second home in the Caucasus. During Stalin's time of exile, the Alliluyev family was a source of assistance and refuge, and during 1917, Stalin lived from time to time in their apartment.

Nadezhda first met Stalin as a child when her father, Sergei Alliluyev, sheltered him after one of his escapes from Siberian exile during 1911. She may have always been in love with the mysterious swarthy Georgian with the yellowish-colored eyes who saved her life from drowning when she was a child.[1]

After the revolution, Nadezhda worked as a confidential code clerk in Lenin's office. She eschewed fancy dress, makeup, and other trappings that she felt un-befitting of a proper Bolshevik.

The couple married in 1919, when Stalin was already a 41-year-old widower and father of one son, born to his first wife, who died of typhus years earlier. Nadezhda and Joseph had two children together: Vasily, born in 1921, who became a fighter pilot (C.O. of 32 GIAP) at Stalingrad, and Svetlana, their daughter, born 1926.

According to her close friend, Polina Zhemchuzhina, the marriage was strained, and the two argued frequently. She also suffered from a mental illness, possibly bipolar disorder or borderline personality disorder ; Molotov recalled that she suffered from mood changes that made her seem like a "mad woman". While she was friendly with Vasily, she was not close to Svetlana, and was stern with both children.

After a public spat with Stalin at a party dinner, Nadezhda was found dead in her bedroom, a revolver by her side.[2] Regardless, the official announcement was that Nadezhda died from appendicitis. Some claim the gun was found beside the hand she didn't use, apparently indicating a framed suicide; many in Russia allege that Stalin killed her himself.[3][4]

Accounts of contemporaries and Stalin's letters indicate that he was much disturbed by the event.[5][6]

Nadezhda's and Stalin's daughter, Svetlana Alliluyeva, defected to the United States in 1967, where she eventually published her autobiography, which included recollections of her parents and their relationship.

Alliluyeva was portrayed by Julia Ormond in the 1992 television film Stalin.[7]