The Namibia Air Force was commissioned on 13 March 2005 at Grootfontein Air Base.[2] Following the independence of Namibia from South Africa in 1990, the Air defence wing of the defence forces were established on 23 July 1994.[3] The policy, mission statements and concept of operations envisage the development of an Air Force to operate in support of the Army and the Navy.

Five separate roles for Air Force are; surveillance, transport of personnel and transport of supplies/equipment; support to the civil authorities or civil community, and training.[4]

With Grootfontein as the main air base, expansion projects are underway to expand the Keetmanshoop air base, as well as construct a new base at Karibib. This was reported by The Namibian on 20 June 2008. The Air Force Headquarters are now based at Karibib Air Base[5]

The policy for the Air Force is as follows

To acquire dedicated air assets to undertake the surveillance and transport tasks. The MOD and NDF will train and employ their own pilots and technicians. Co-operation and co-ordination with other Ministries may extend to making such assets available for non-defence tasking. In addition, consideration will be given to arrangements whereby private and other national air assets could be employed where appropriate or necessary.

Expansion of the Air Base at Keetmanshoop is planned.[15]

Nicknamed 'Daredevils' the 23rd Squadron is a fighter squadron and is home to the Chengdu F-7 Airguards.

Hosting the Fixed wing transport aircraft is the 13 wing. The wing consists of the AN-26 and Y-12 Aircraft.

The Air Force has deployed numerous times to help civic authorities during disasters. Health outreach workers have been ferried during immunization campaigns . It has assisted in transporting Electoral material and personnel during National elections.[17] It has also flown foreign Heads of States during their stay in Namibia[18]

The Air force was deployed to the DRC during the Second Congo War. Harbin Y-12 Transport aircraft where utilized on logistics supply missions to the DRC as well as withdrawing Namibian troops at the end of the War.Two Namibian Allouette helicopters crashed in mid air while on operations during the war due to bad weather.The accident claimed nine lives including two Namibian pilots and three technicians.[19] During the 2014 floods at Tokwe-Murkosi in Masvingo, Zimbabwe the air force deployed a flight consisting of one Harbin Z-9 and two Allouette's to assist with the evacuation of the affected people.[20] The mission lasted seven days in which 600 residents were airlifted with 56 tons of goods.[21]

Other establishments and units

The school of air power studies will offer 6 months training to candidates.[17]

The Air Force operates the Technical Training Centre (TTC) at Grootfontein Air Base. The centre caters for technical training of the Air force's ground personnel. Students from SADC Air Forces have also been accepted to institution'.[22] Its curriculum are run in conjunction with the Namibian Aviation Training Academy.[23] Qualifications offered include certificates and diplomas in:

The highest rank a commissioned officer can attain in the Air Force is Air Vice Marshal. There may however be an exception when an Air Force officer is appointed as Chief of the Defence Force for which the individual which ascend to the rank of Air Marshal.

The highest rank an enlisted member can attain is Warrant Officer Class 1. 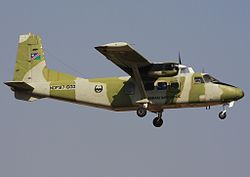